In the south of Lyon’s peninsula, where the Rhône and Saône converge, lies the district of Confluence – a former industrial zone that is being converted into a new quarter. The city is relying for this ambitious makeover on spectacular architecture. Odile Decq, France’s best-known architect, has definitely fulfilled the high expectations and designed an office building called “Pavilion 8” with a massive protruding section – for events and trade-fair company “GL Events”.

On the underside of the protruding and seemingly floating section of the pavilion new build the use of bright red bears Decq’s unmistakable mark. And inside the rooms the color constantly recurs, with the office and seating furniture all in the same red tone. As with other Odile Decq projects, the building’s structure is exposed and specially staged: Three massive steel pylons supporting double-crossing beams bear the load of the protruding floors and define the look of the building. The luminaires in the spacious entrance zone were likewise created by Decq. For the new Museum of Contemporary Art in Rome, the MACRO, she designed the “Javelot” (spear) luminaire which Milan lightmakers Luceplan has been producing since 2010 – with its sharp slender tips it lays claim to the space around it. Here in Lyon the large standard lamp featuring three “spears” was chosen to fill the extensive space with light.

Together with Luceplan, for the Lyons project Odile Decq again purpose-designed a new luminaire – the collaboration with architects and light designers is a long-standing tradition at the company, which seeks in this way to develop customized solutions on a larger scale. The new luminaire is named “Pétale” as in flowers, and its soft and curved shapes create a sweet contrast to the powerful steel structure, emphasizing the spacious quality of the rooms – the support-free office storeys are only subdivided by glass walls. And the white pendant luminaires can do more, besides. They are made of a noise-absorbing material and thus help offset the disadvantage of such large office zones. At Pavilion 8, the Pétale luminaires are used in two different sizes for all areas: In the office and conference rooms, on the one hand, and in the entrance area and the open multi-function zones on the other. In this way, the gleaming white ‘petals’ introduce an elegant touch to the building’s otherwise more industrial feel. 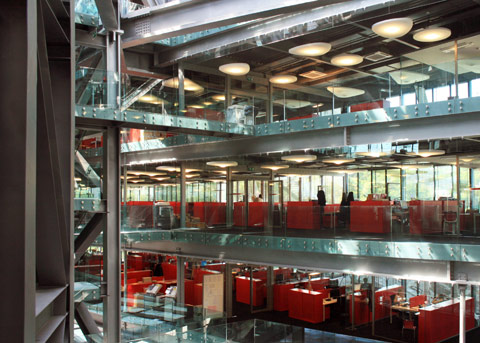 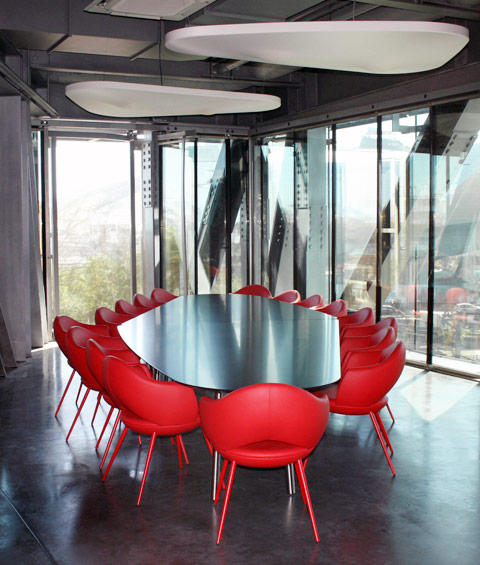 “Pétale” as in flower is the name chosen for the Luceplan luminaires, which are made form a sound-absorbent material. Photo © Odile Decq 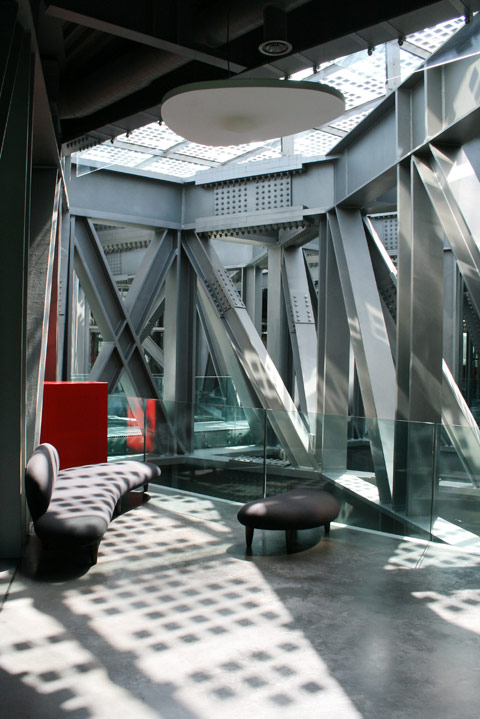 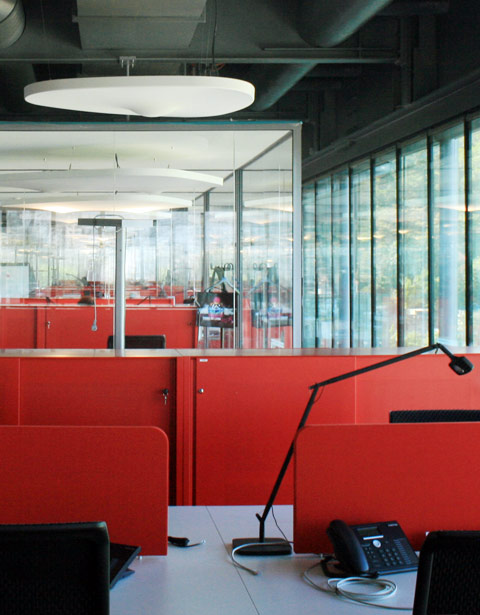 The desk lamps, which go by the great name of “Otto Watt”, are likewise made by Luceplan.
Photo © Odile Decq 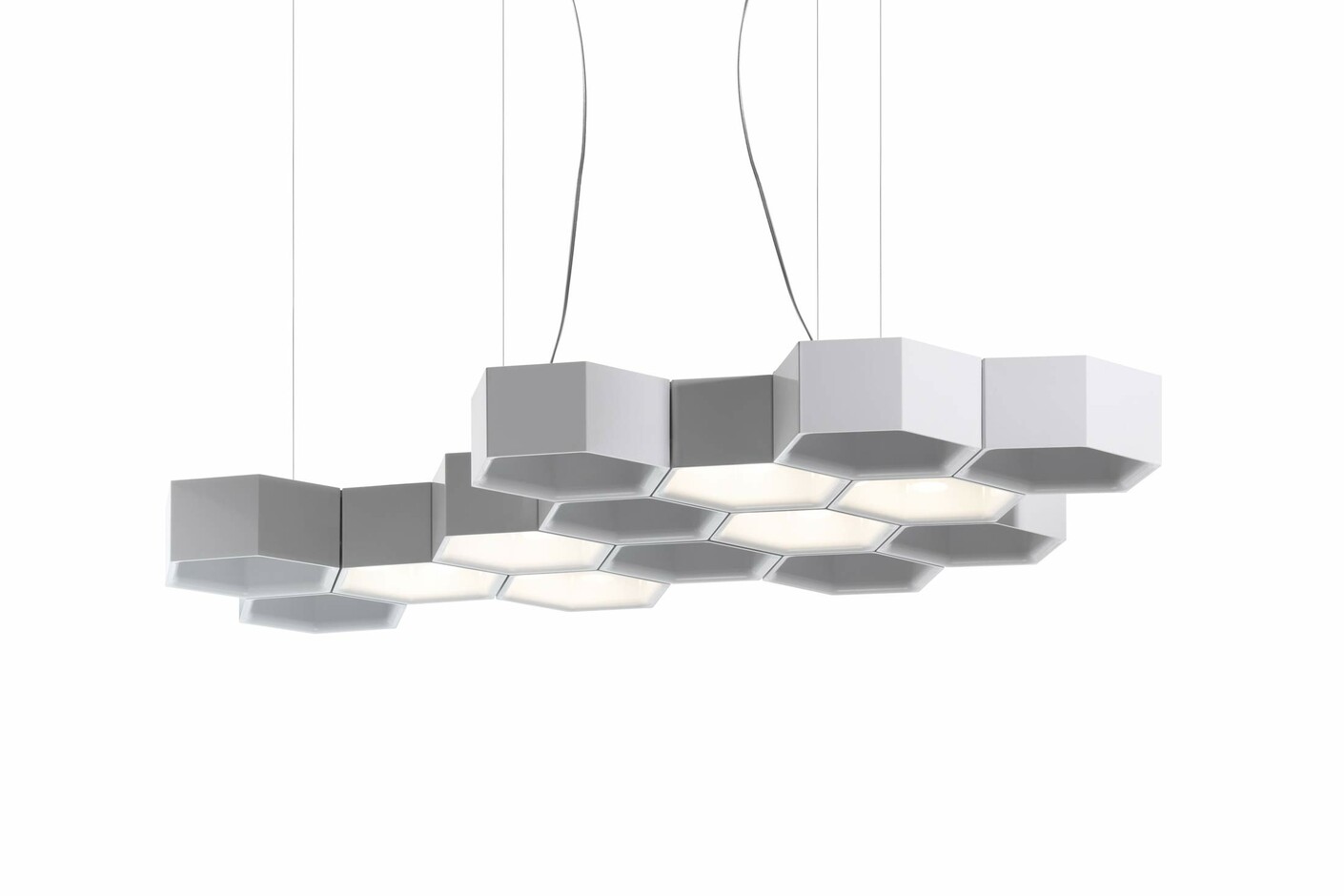 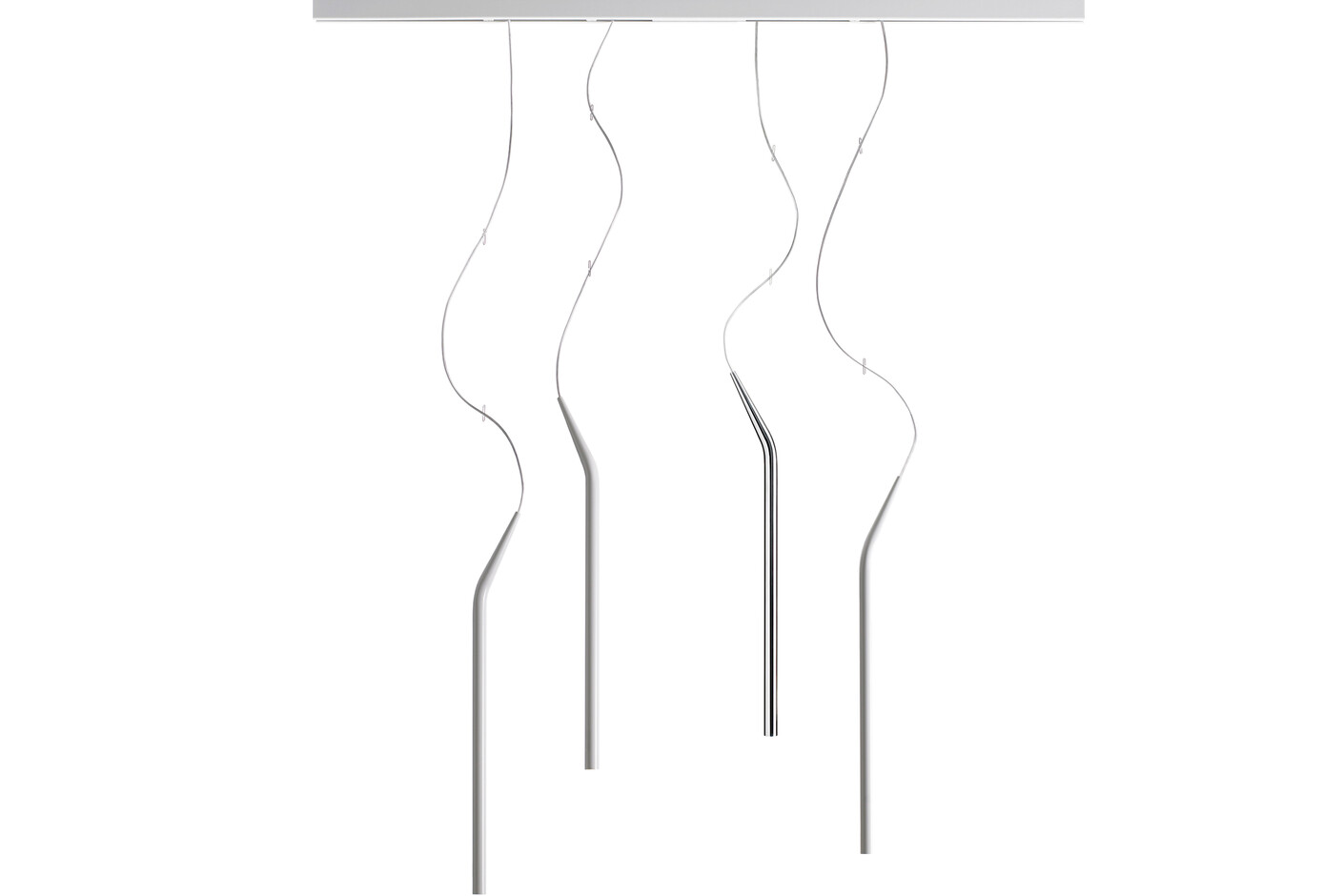 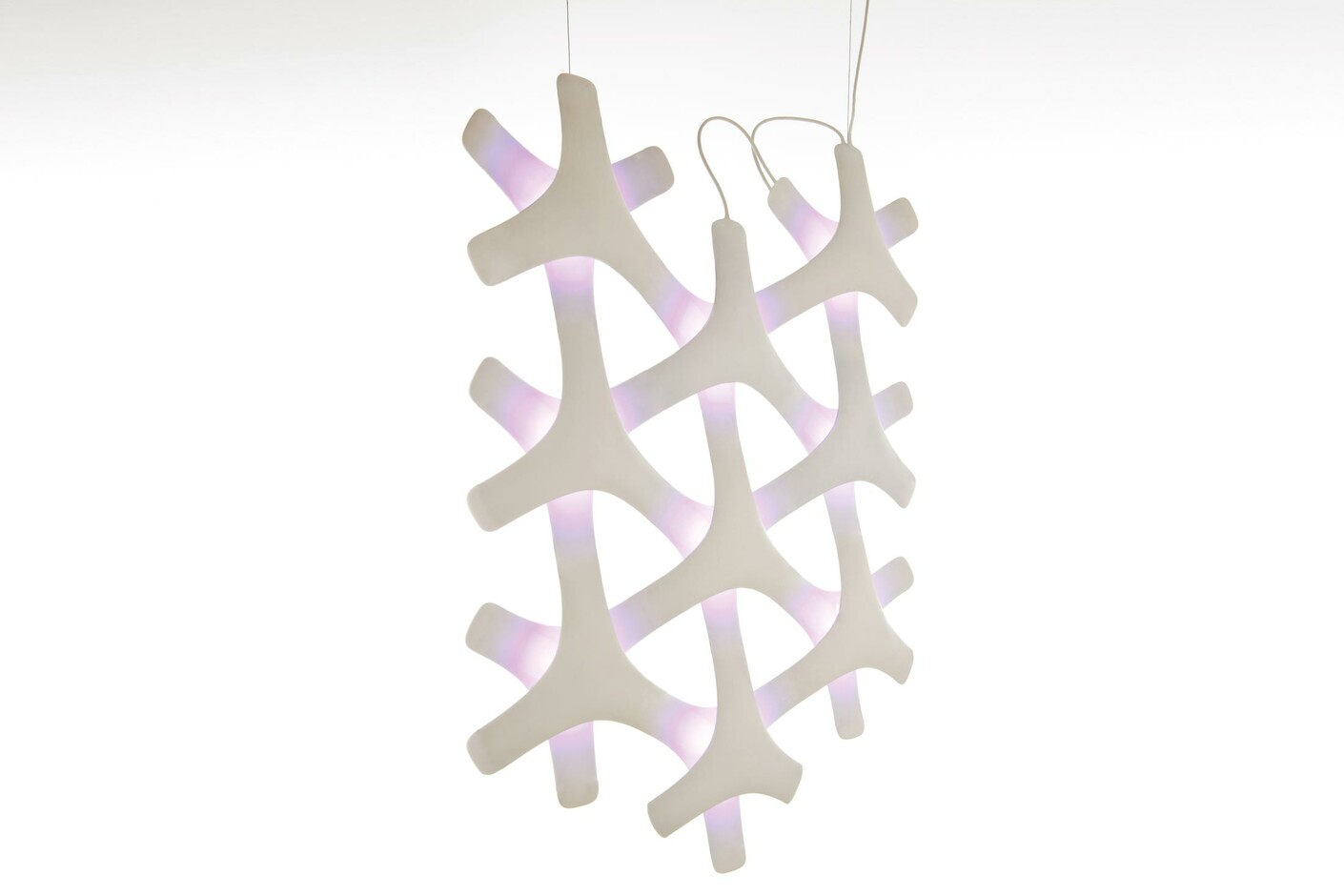 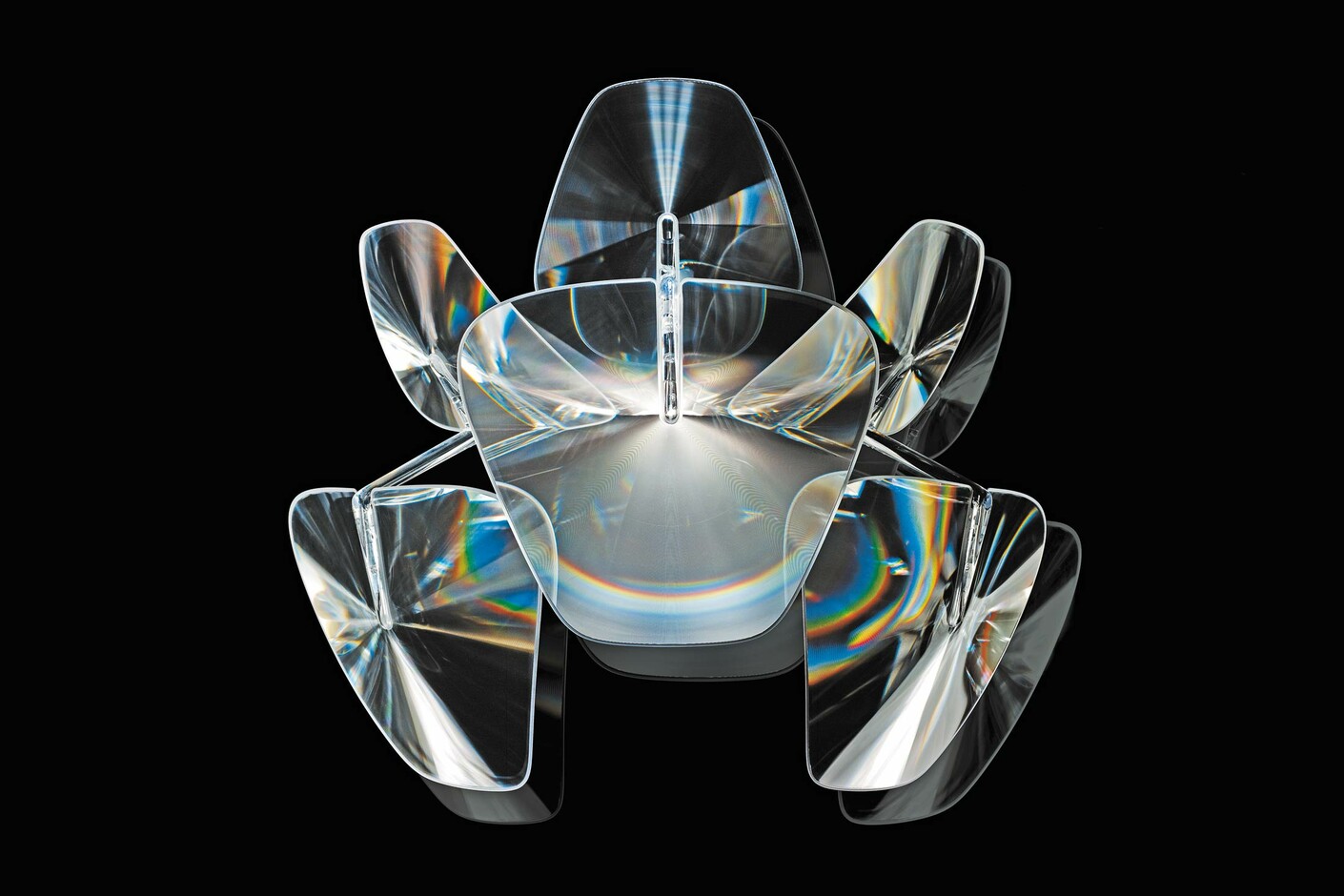