The “Mary Rose” was built in Portsmouth in 1510 and, with a crew of 500, was one of the largest warships in the English fleet. Yet only a few years later, in 1545, the four-master sank in a naval battle in the Solent off the Isle of Wight and was not salvaged until centuries later. In 1982 specialists started conserving the ship’s wooden hull, which is now drying in a glass hot-air chamber while on display to the public in a new museum at the same time.

Wilkinson Eyre Architects designed the museum for Portsmouth Historic Dockyard, where the “Mary Rose” was built over 400 years ago. The building is designed to complement the shape and design of the Mary Rose, to reflect the significance of the site. The material they chose for the exterior areas, which are constantly exposed to the harsh maritime climate, is a durable Norwegian wood product called Kebony. The shell-shaped building with its wooden cladding calls to mind a ship’s hull or superstructure and thus makes reference in a modern and abstract way to the maritime environment. Inside the architects have skillfully built a walkway around the wreck on several levels, which also determines the outer shape of the building. On view is the surviving half of the “Mary Rose”, with the addition of reconstructed sections of the ship on three levels in which numerous finds are also presented.

In contrast to the close quarters of the hull area an open gallery at deck height affords panoramic views of Portsmouth Harbour. For the open gallery and the outside areas, the architects sought a weatherproof alternative to tropical wood. An appropriate choice, Kebony wood is sustainable, environmentally-friendly, non-toxic, easily-maintained and resistant to decay. Its impressive durability and long lifespan in harsh climates makes it the perfect choice for this new harbour-side landmark. The Kebony technology, ‘Kebonization,’ is a patented process which enhances the properties of wood. Through an environmentally friendly process wood species such as maple, pine and beech are impregnated with a patented mixture based on furfuryl alcohol, a liquid produced from agricultural crop waste. After impregnation the liquid reacts within the wood fibres. The process permanently strengthens and stabilises the wood, and makes the wood durable against biological decay. The company’s and sustainable production method has received numerous awards and accolades in recognition of its environmentally friendly innovation. 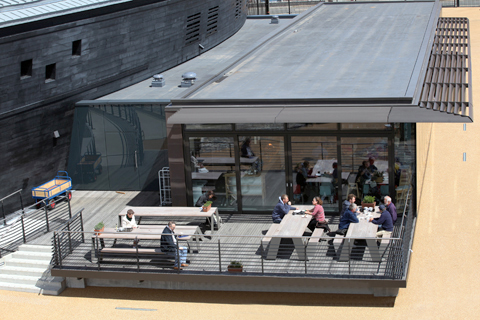 Kebony’s award-winning alternative to tropical hardwood and toxic-treated wood was selected as the material of choice for the decking at the museum. Photo: © Kebony 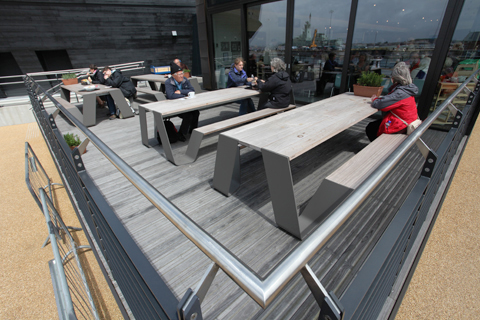 Kebony is beautifully aesthetic and will evolve over time to achieve a silver-grey patina, perfectly complementing of its marine setting. Photo: © Kebony 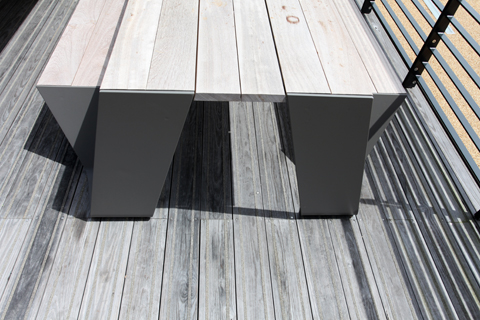 Kebony has been used for the decking of the new Mary Rose museum, an important monument to the UK’s maritime history. Photo: © Kebony 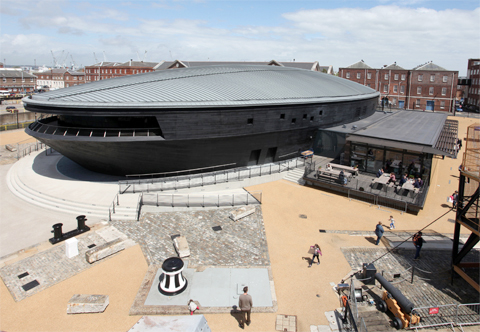 The Mary Rose museum houses may of the 19,000 artefacts that were retrieved from the hull of the Mary Rose. Photo: © Kebony 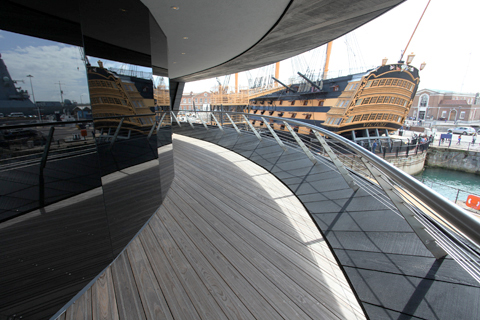 The museum, situated in the heart of Portsmouth Historic Dockyard, opened to the public on 31st May. Photo: © Kebony 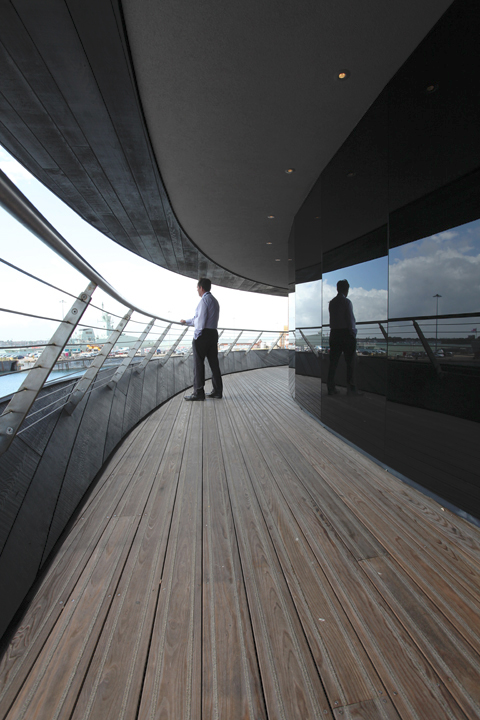 Kebony’s was selected as the material of choice for its sustainable, aesthetic and durable qualities, able to withstand the harsh sea-front environment. Photo: © Kebony 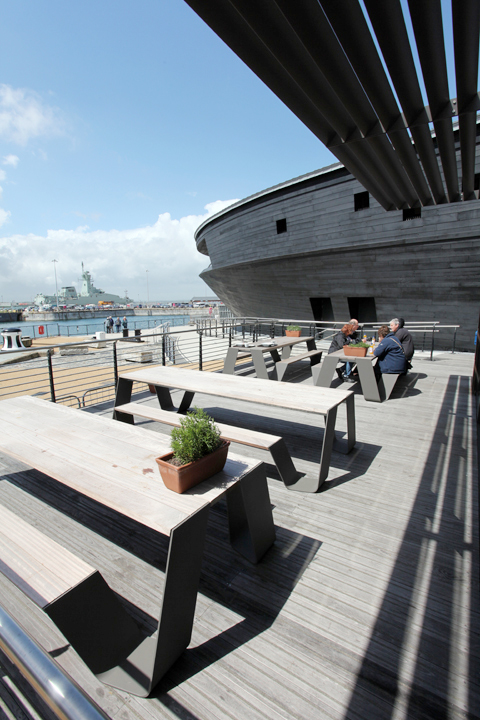 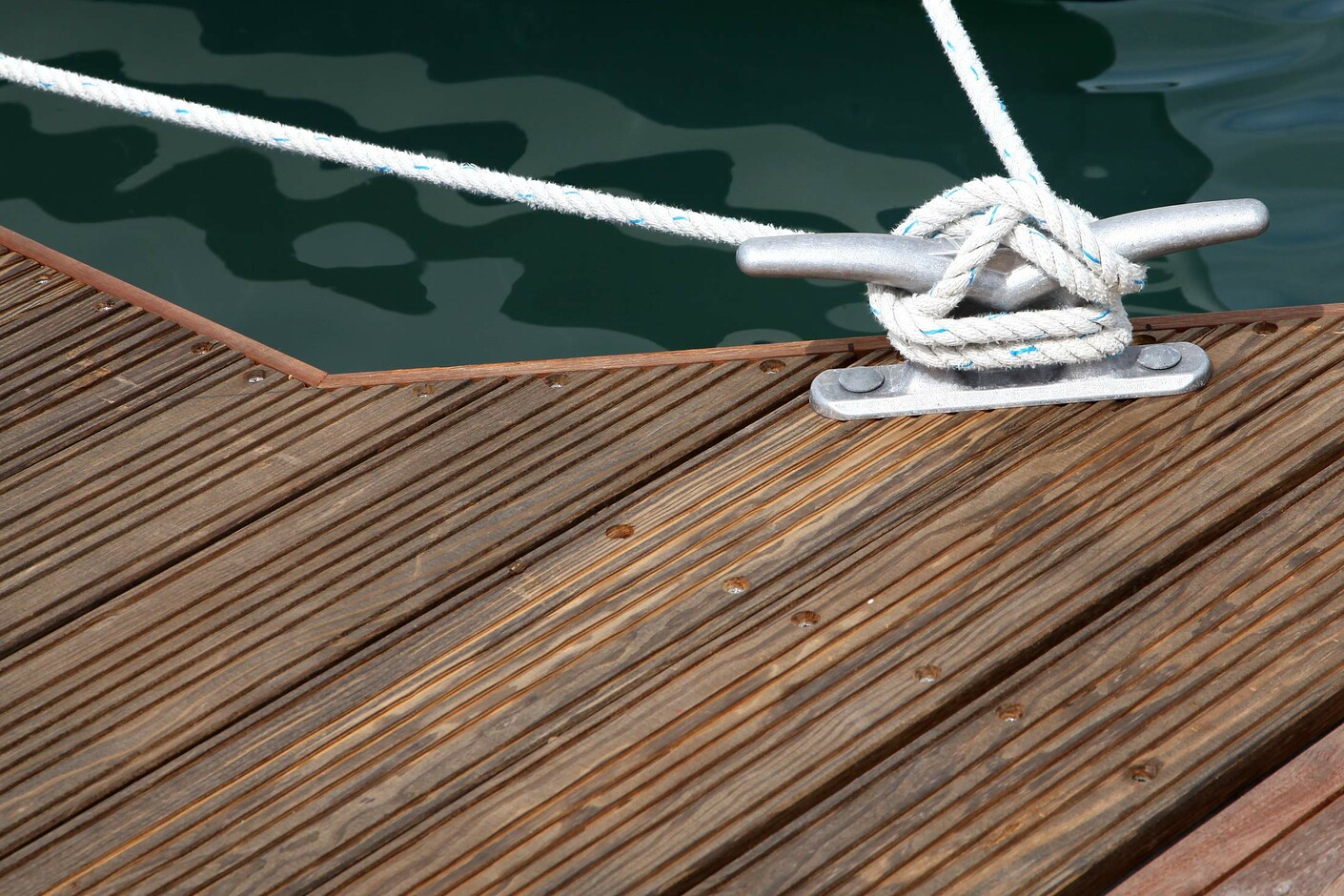 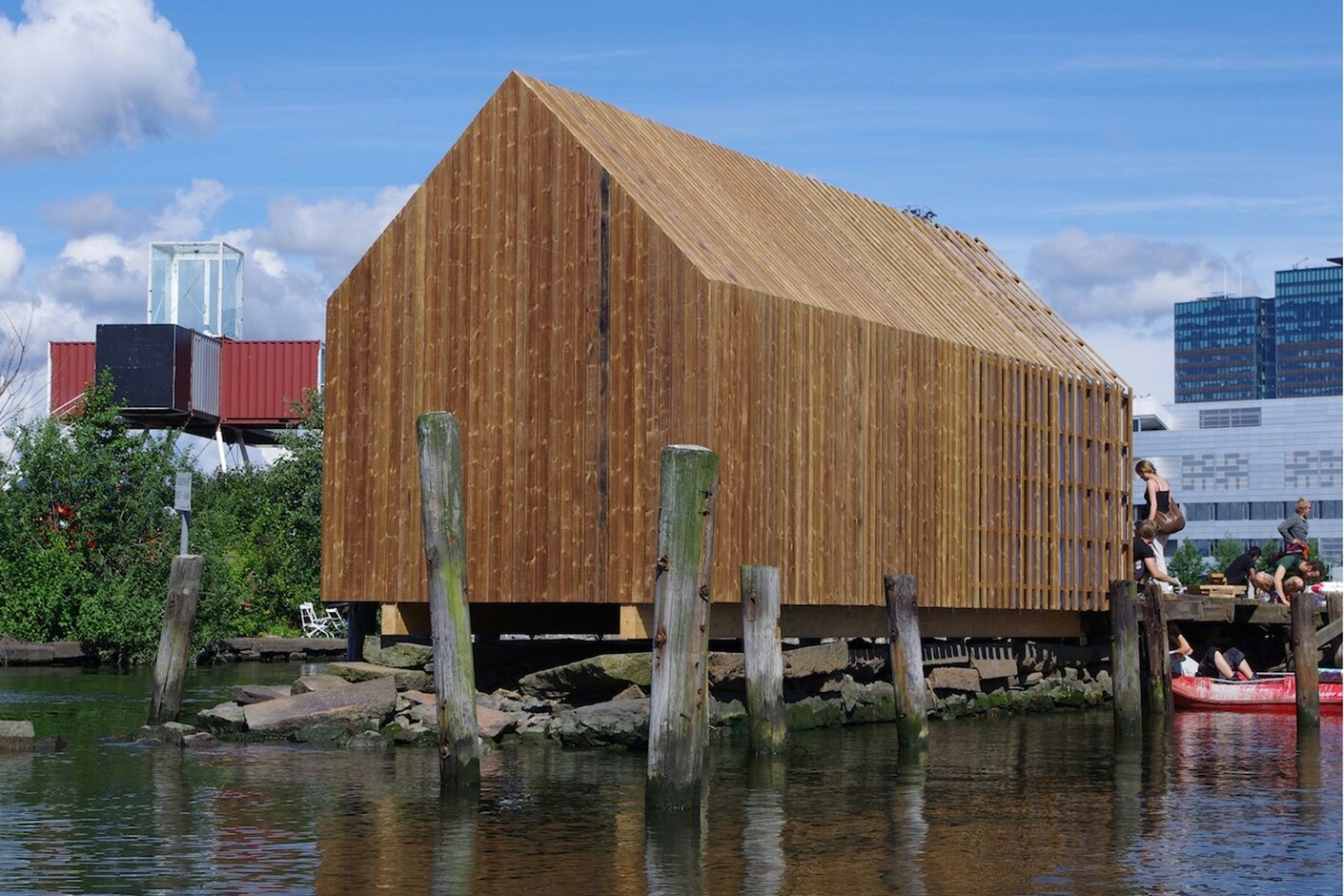 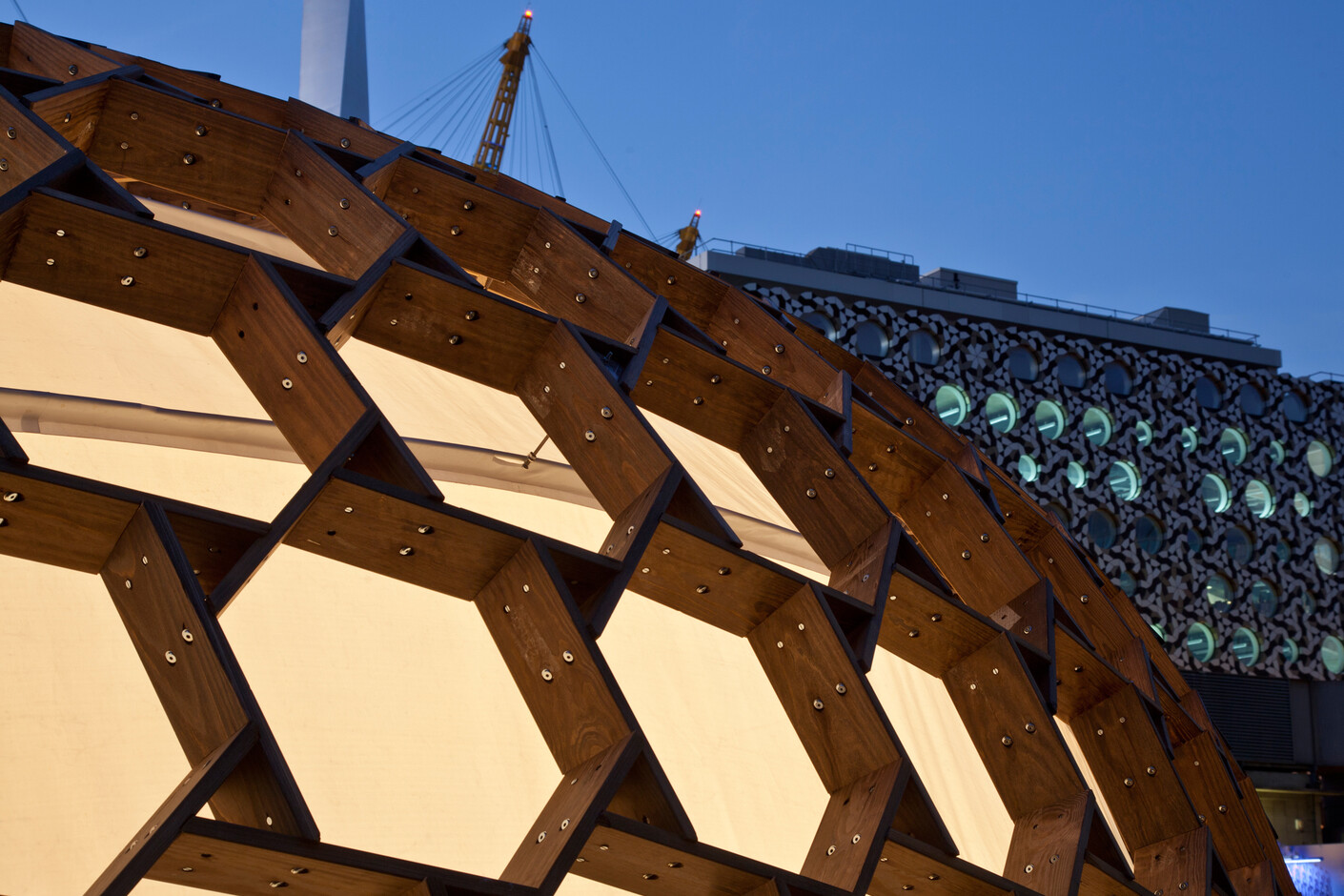 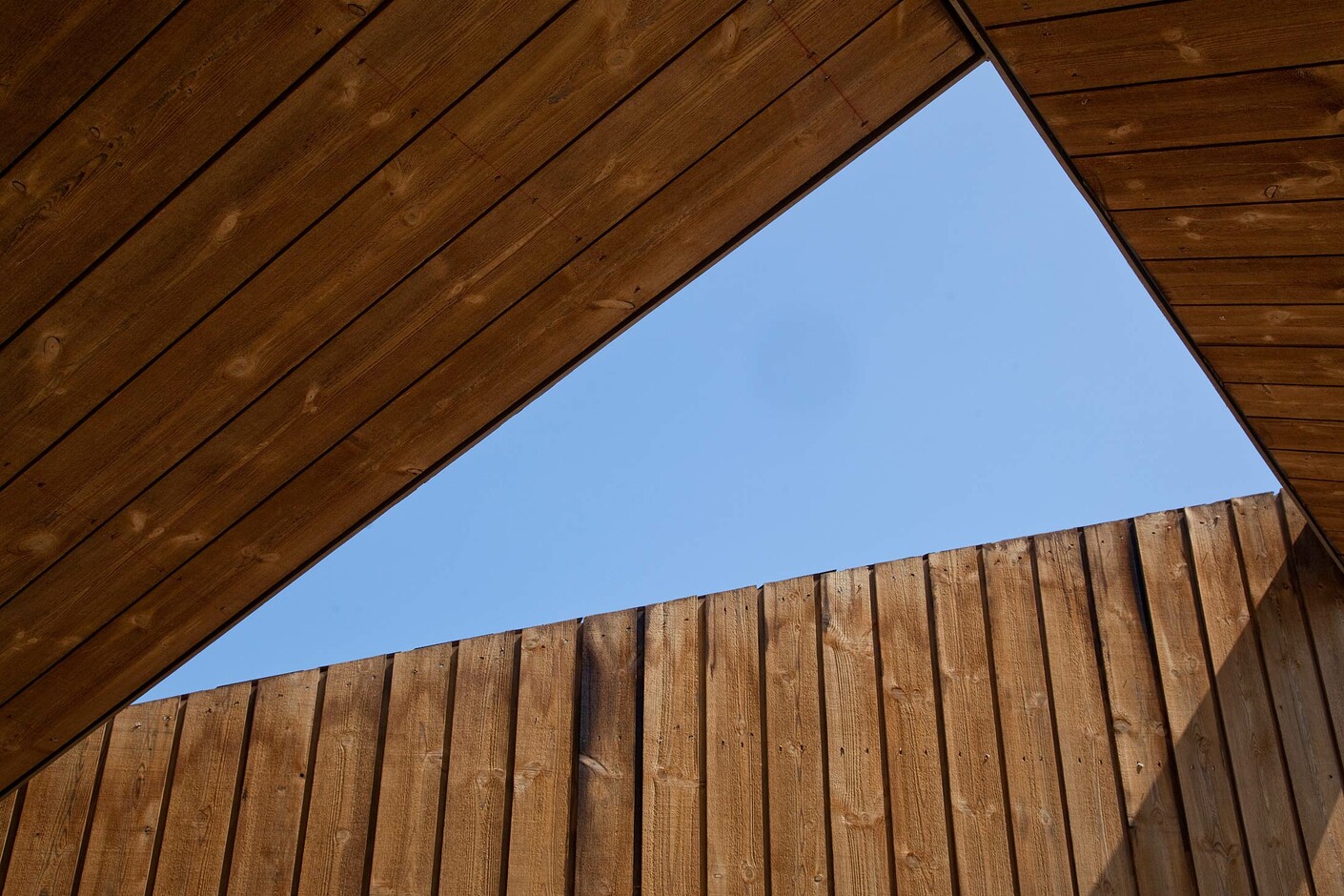