Detail of the façade featuring perforations in three different sizes. Photo © RMIG
Although classes haven’t started yet, the nine-story main building clearly marks out the new university campus in Bergen, Norway. Four former, listed railway workshops have been remodeled, providing the university in the Kronstad district with a new look. Among other things, they now house a library for the roughly 7,000 students. A total space of 51,000 square meters has been filled with sports facilities, a cultural center, canteens and cafés as well as the obligatory seminar rooms and lecture halls. It was hlm arkitektur that won the architectural competition thanks to its suggestion to consolidate the existing and new buildings into a coherent whole, creating visual unity by means of a perforated façade boasting an irregular pattern. Norwegian artist Anne-Gry Løland won the subsequent competition to design these enormous surfaces. RMIG was then called in to manufacture the perforated metal sheeting. As a result, the closed sides of the tower building and its stairways were dressed using a series of metal panels, which create an array of shimmering effects after dusk. Even the elongated, flat-roofed wing flanked by the main road and other sections of the building were at least partially covered in the enigmatic pattern and thus create a visual link between the different sections of the buildings. After all, as compact as the five-story block may appear from the outside, on the inside it opens up into a series of communicative zones and gardens.
The template devised by artist Anne-Gry Løland is comprised of large symbols and detailed illustrations that combine to create an irregular yet organic pattern, which can only be appreciated in its entirety from afar. When producing her textile works she tends to revise and even destroy templates using something like a burnout technique until they reveal new patterns. “The beauty of imperfection” is what she calls it. But this time, these intuitive works born of coincidence were subject to the greatest of precision, with RMIG fixing them in aluminum sheets by means of computer-controlled machines.
Architecture
Featured Project
Education 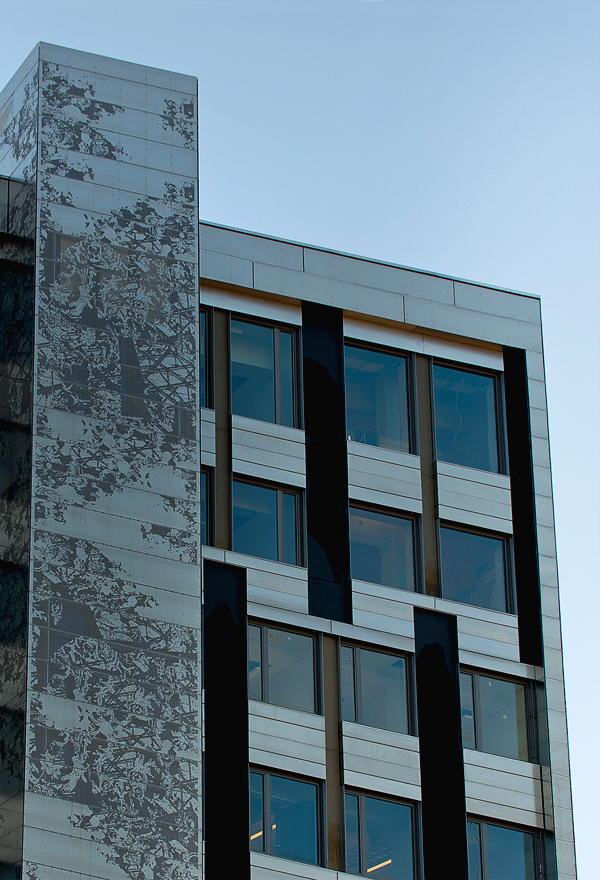 Cladding for the stairway. Photo © RMIG 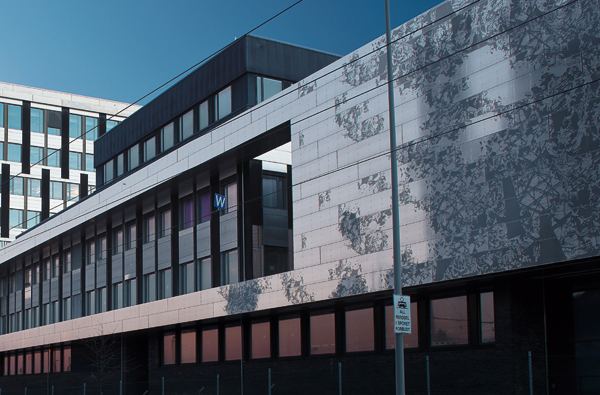 View of the entrance area, shortly before completion. Photo © RMIG 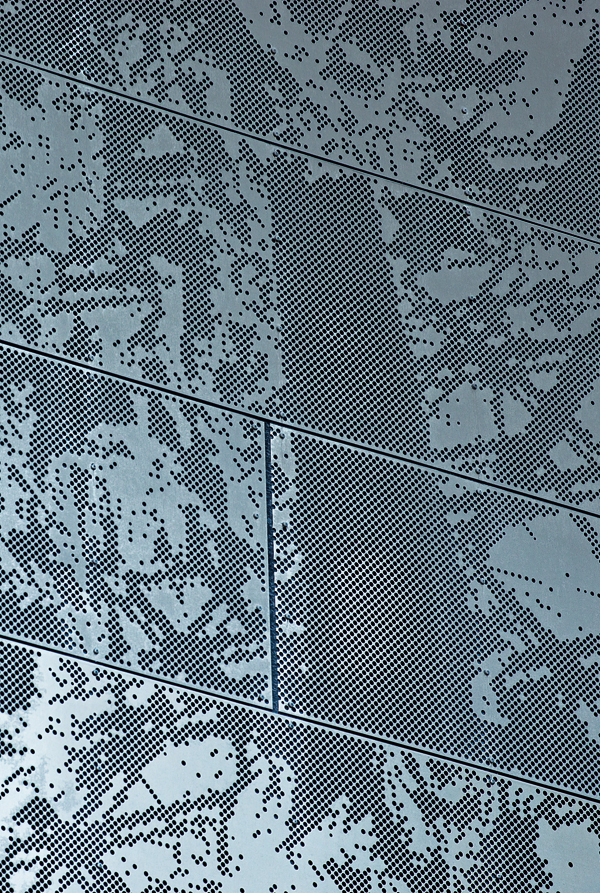 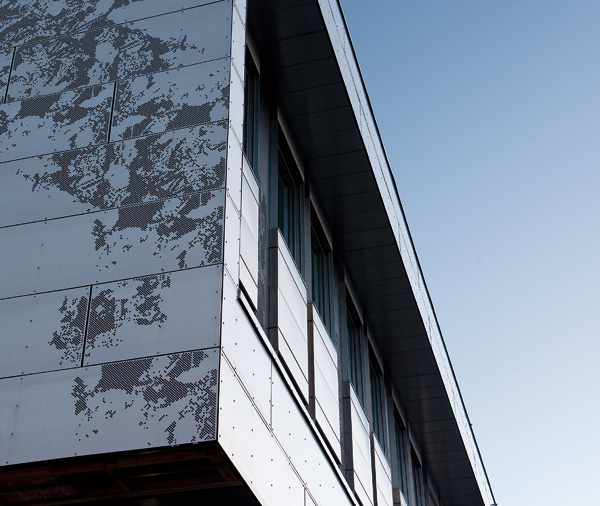 Closed surfaces and perforated sections create abstract patterns or representative images; it all depends on where you’re standing. Photo © RMIG 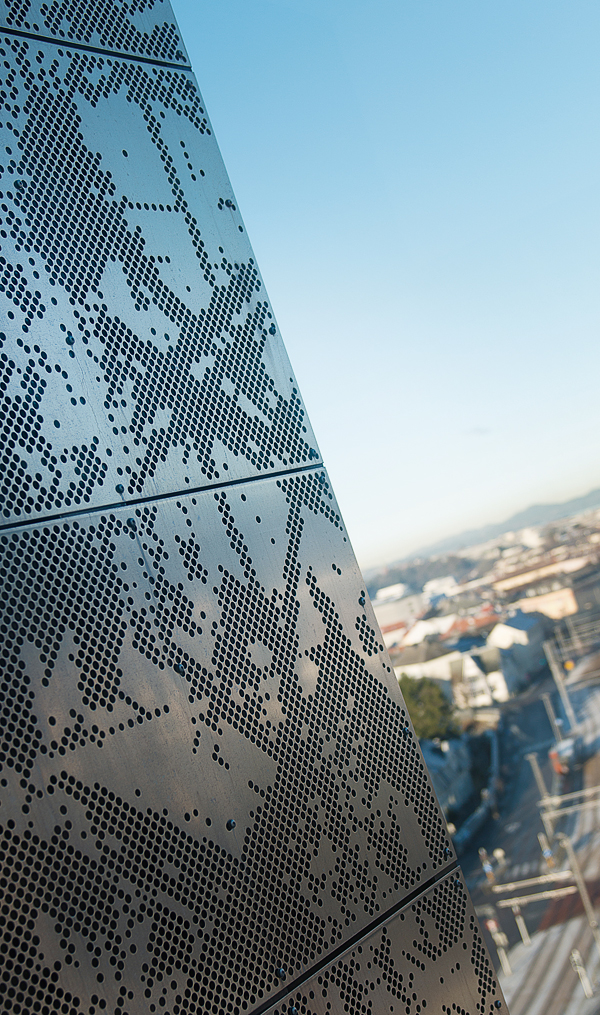 Detail of the perforated pattern with a view of the mountains. Photo © RMIG 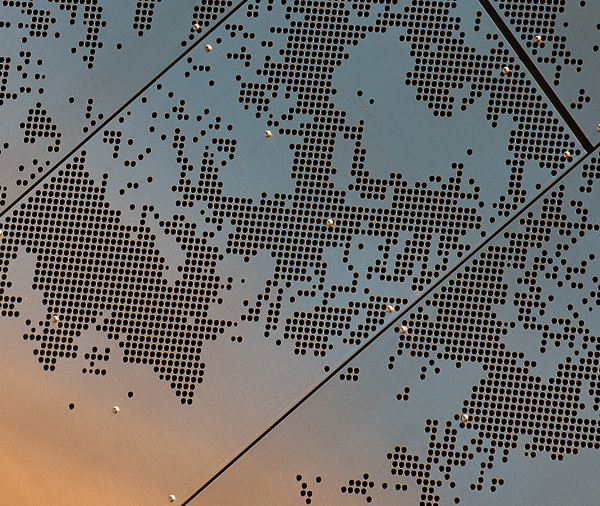 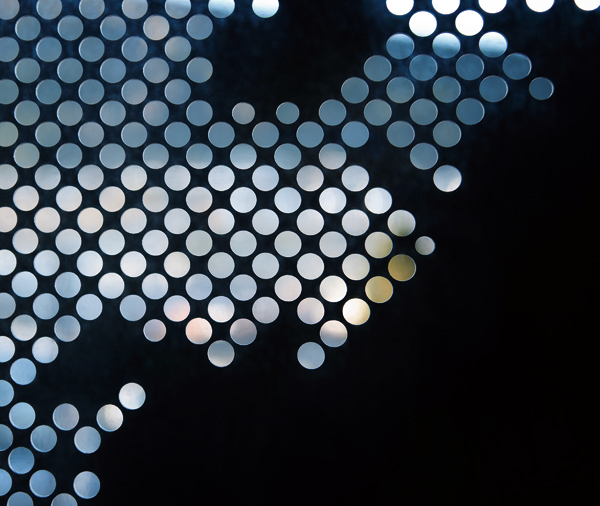 Close up of one of the aluminum panels with all perforations uniform in size. Photo © RMIG 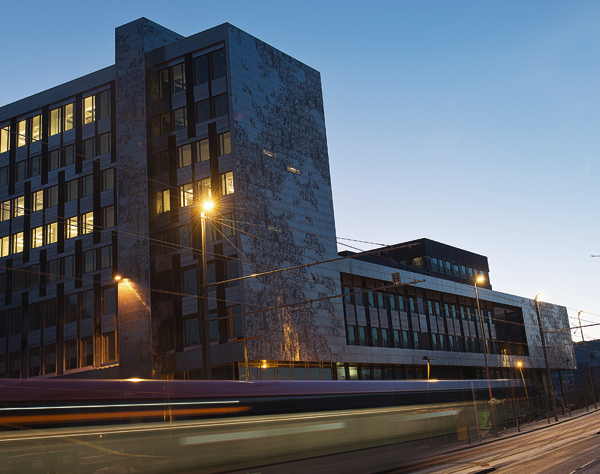 View of the tower and entrance building at Bergen University College. Photo © RMIG 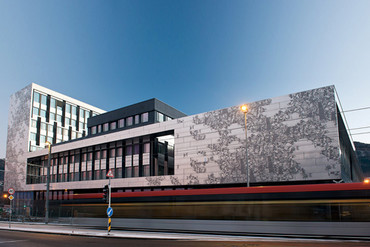