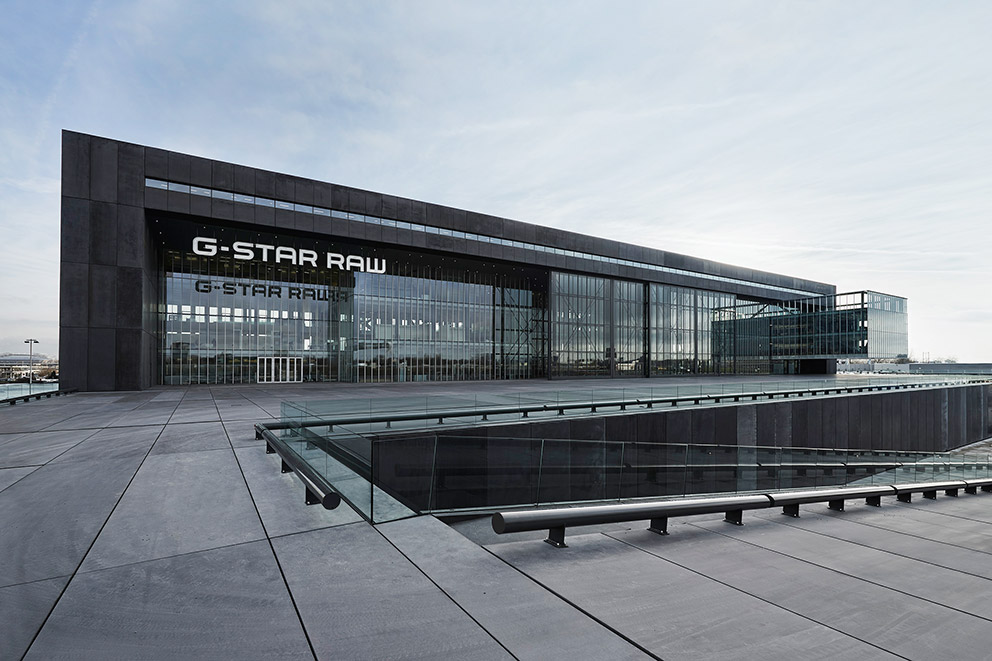 Creativity beneath a seam of light

Office architecture and workplace design are hotly debated topics: What does the office worker of today need to be efficient, yet passionate and brimming with creative ideas? What kind of rooms and ambient settings are required for different activities? And what alternative models are able to strike a balance between those happy and cheerful Google HQs and bland office high-rises geared toward nothing but returns, whose layouts are based on the “one-size-fits-all” principle?

The new HQ of Dutch fashion corporation G-Star is a stunning example that office buildings need neither boast happy color schemes nor make do with the bare necessities. The ensemble has been masterminded by no less a firm than Holland’s very own “Office of Metropolitan Architecture” (OMA), which collaborated closely with G-Star RAW in its development. It is almost one year now that the company relocated to its new premises. A good time to take stock and see whether the wishes and expectations the company harbored for its new base have come true and how the new premises have impacted on the collaboration between G-Star RAW’s different divisions and what has changed for its employees. To find out, we met up with architect Reinier de Graaf, Partner at OMA and Director of AMO and the man who was in charge of the building project, and Pieter Kool, Director of Design at G-Star RAW, in Amsterdam. 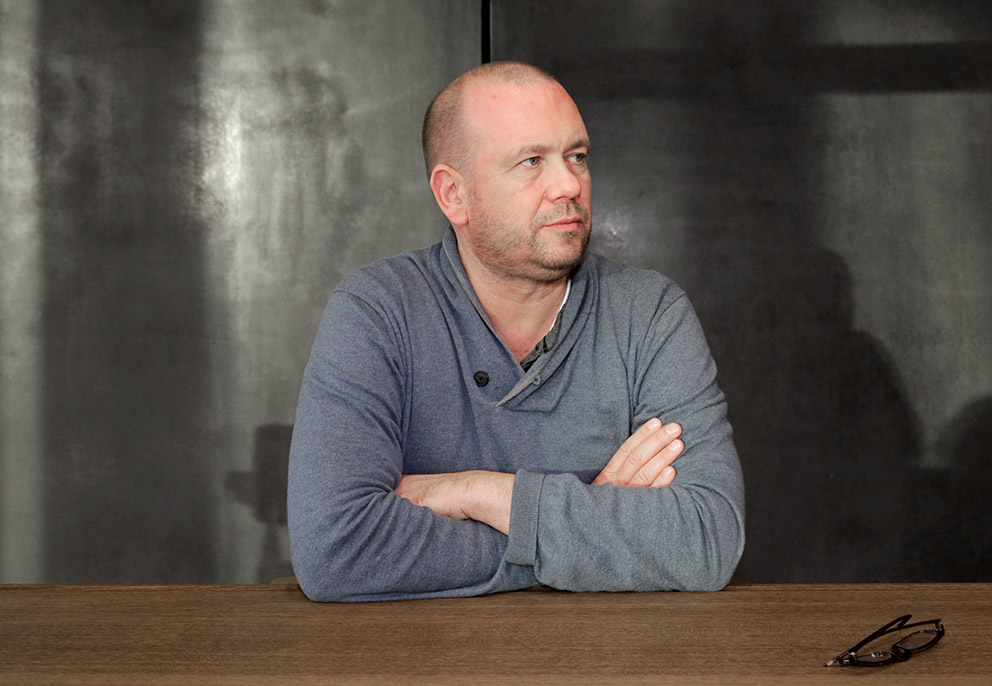 Adeline Seidel: Why did the company opt for a greenfield development over new premises closer to the city – and the hustle and bustle of urban life?

Pieter Kool: G-Star RAW wanted to consolidate all its seven divisions in the one location – and that required a lot of space. And in a city like Amsterdam this is a considerable cost factor that should not be underestimated. In addition, it’s impossible to squeeze the different requirements our divisions have of their “working environments” – among others we have design teams, seamstresses, marketing people etc. – into your typical office block.

Reinier de Graaf: The new building had to meet two central objectives: One, to facilitate interaction between the different divisions and two, to be spacious. Spacious in the sense of double-height rooms, plenty of visual links between them, and so on. If you consider the costs per square meter, the building, which extends across 27,500 square meters, is rather inexpensive. And if you look at the cubic meters of enclosed space, you will find that we have actually produced a building that is fantastically low in cost. This would not have been possible in downtown Amsterdam.

Adeline Seidel: When I drove past the building earlier I immediately thought it looked like a supersized advertising sign. Which is probably the desired effect in relation to the surroundings. What is the idea behind the architecture?

Pieter Kool: (laughs) It’s meant to be a machine for innovation!

Reiner de Graaf: The concept is actually rather simple: The “frame” made of black concrete houses the offices for those divisions that require a confidential setting, such as accounting etc.; while parking levels and other usage functions such as storage rooms embrace the creative zone. Contrary to the frame, the façade of the creative zone is made of glass. That’s the basic principle. 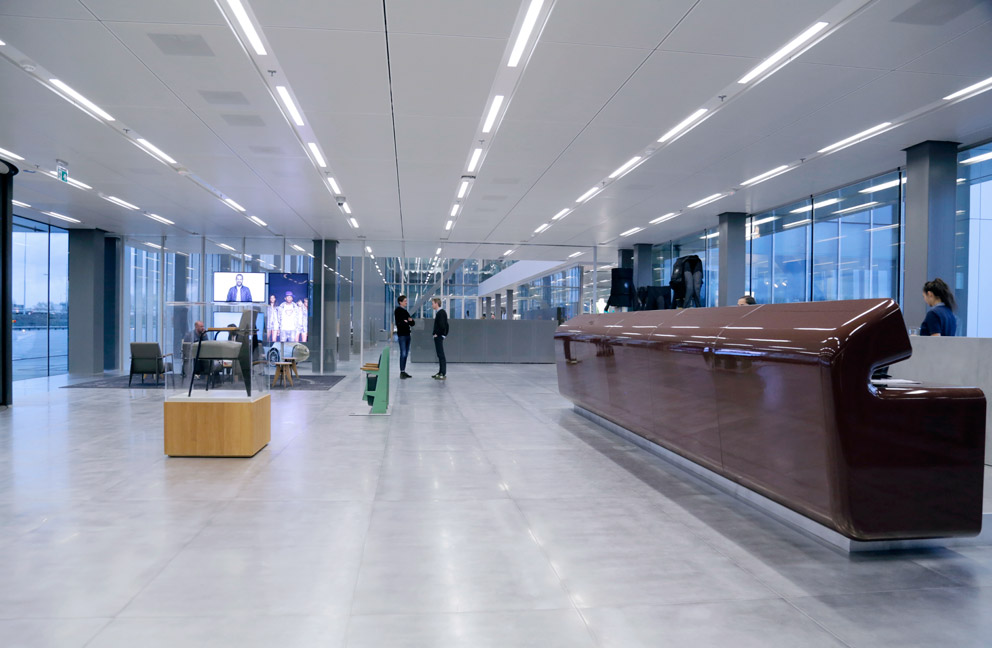 Adeline Seidel: Foyer and reception seem rather unpretentious. I would have expected a double-height space here.

Reinier de Graaf: Why? It’s a space destined to welcome employees and visitors, but no one, with the exception of the reception crew, spends their entire day here. Spaciousness should not be confused with extravagance. And G-Star RAW is a company that has kept its feet firmly on the ground.

Adeline Seidel: The floors are made of metal, the façade is made of glass – how did you succeed in keeping noise at bay in the open-plan offices of the creative zone and provide comfortable working conditions?

Reinier de Graaf: Everyone seems to think this has to be a noisy place to work. And indeed it was one of the key issues, which required a technical solution. This presents itself in the form of a suspended ceiling – as regards the design it was a real challenge to come up with a solution or a product we would gladly allow defining the building’s architecture. But let’s be honest: The suspended ceiling is a reality in modern buildings, and one you simply cannot escape, even if most people don’t like it. But the suspended ceiling is imperative for the majority of buildings of this size – think ventilation, acoustics, power supply. Quite apart from that this building is wonderfully generic: supports, ceiling joists, floors – all of them standard features in the Dutch construction industry. Added to which this building is perfectly rational – both the floor and the façade are based on a grid of 40 by 80 centimeters.

Adeline Seidel: How did this architecture informed by generous and open-plan offices impact on the collaboration between the divisions? What has changed exactly?

Pieter Kool: I hear from employees that they are getting fewer emails now. Which is a metaphorical way of saying that the interaction between the divisions has improved. And we definitely have to thank the architecture for it. Simply because employees get to see each other more often. We happen to bump into one another more frequently – and the building’s open-plan design. You see others going about their work and ask them how they are getting along. So there are a lot of chance encounters. Which is very inspiring. 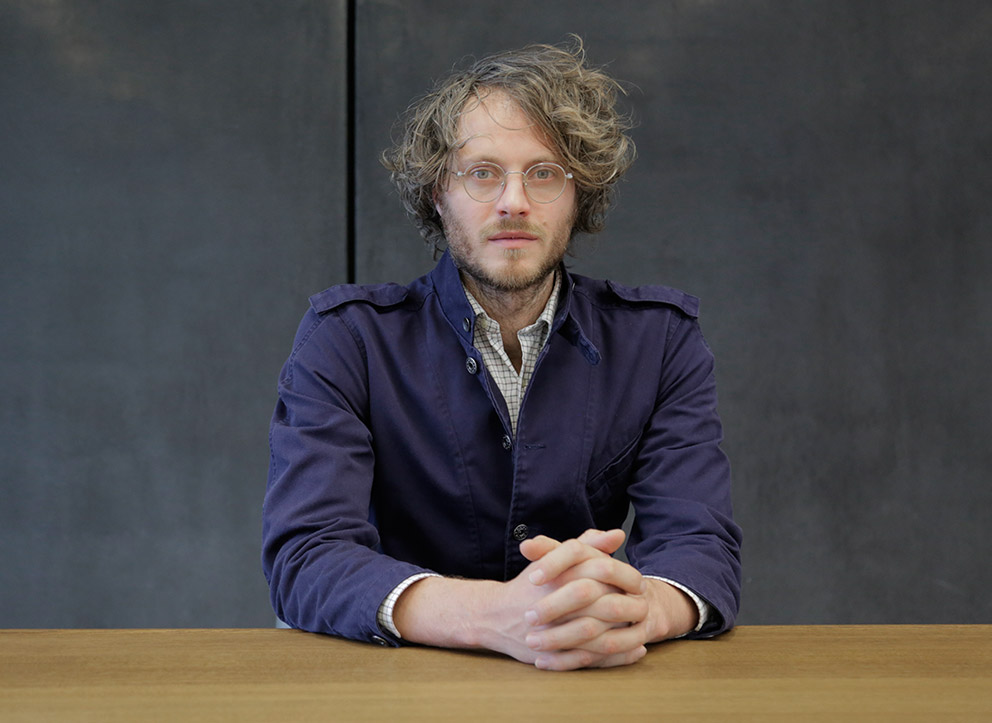 Adeline Seidel: The ceilings have been fitted with strip lighting that extends through the building like a continuous seam of light. Conjuring associations of a factory.

Reinier de Graaf: The vitreous façade ensures the offices enjoy a lot of daylight. Added to which, these “lighting strips” have been sectioned into different zones that can be individually adjusted for brightness. Meaning that we can cater to a whole host of requirements.

Adeline Seidel: Sure, but on the other hand the workspaces have not been fitted with individual luminaires. I would sorely miss a personal desktop lamp as I prefer a bright personal working environment to aid my concentration – while the remainder of the room should rather be dark.

Pieter Kool: So far we have not had any requests like that.

Adeline Seidel: The building has a rather pleasant “blandness” about it, with greens, browns and grays dominating the interior. Nonetheless, would you not associate working creatively with bright and colorful work environments?

Reinier de Graf: We’ve thankfully managed to avoid that. I mean, what we do is still industrial labor, in a way, and therefore almost work. The fun factor, as I’ve seen it in various offices, mainly in the United States and particularly so in California, has something deeply oppressive about it. It’s supposed to accommodate a private life to make you feel at home at work; so they say it’s a way of bringing home to work. Strangely, I think the effect is reversed and it’s a way of bringing work to your home. It’s an infiltration of your private space by work. And that’s a very dubious pact between the two that I have always had my questions about. The more symbols I see around me supposed to put me at ease, the more I realize they are mere symbols intended to put me at ease, and the less at ease I feel. 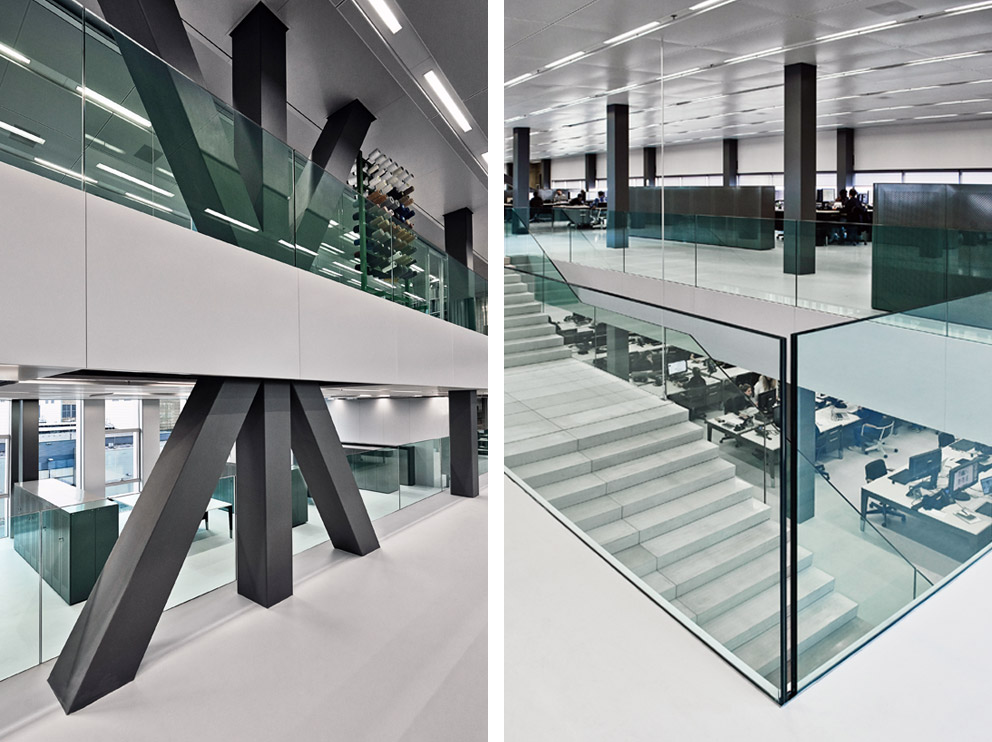 Inside the creative core of the building, staggered floor plates and double height spaces promote a dynamic exchange between the different creative departments allowing for cross communication. Photo © G-Star RAW

Adeline Seidel: So architecture indeed plays a decisive role when it comes to fostering creativity?

Reinier de Graaf: Well, I mean, people meet in the built space, that too is a major debate in architecture. Is creativity ultimately the product of a carefully cultivated solitude? Or is creativity the product of two people meeting and interacting? I think it’s both. Having been involved in the creative sector for some time now, I feel it’s really about striking a balance between interaction and privacy; gaining impressions and then the possibility to retreat to develop your own version and hone it. And of course, space par excellence is the way where you organize that balance.

Adeline Seidel: Looking back at the project phase now, are there things you didn’t expect, things that have taken you by surprise?

Reinier de Graaf: If I walk around now, I’m really pleasantly surprised how many intimate spaces there are in the building; how many private moments there are. I had expected a bit more of a factory feel with a Panopticon quality to it, but it’s not like that at all. The workspaces certainly offer an overview of the whole building, but then there are other moments when you almost feel like you’re in a corner, even though you’re in the middle of this grand space.

Pieter Kool: One highlight in the new building is the “RAW Space”. It took a while for us as a company before we got a feel for the rooms and checked out all the possibilities and made the whole ensemble our own. We use the RAW Space for presentations, marketing and other events. Our employees keep coming up with ever new ideas of how to use this space. For our company it represents inspiration and freedom. In an “ordinary” office we would never have had a space like this. As for me personally, I like looking at the cars whizzing past on the interstate – it has a very meditative quality to it. 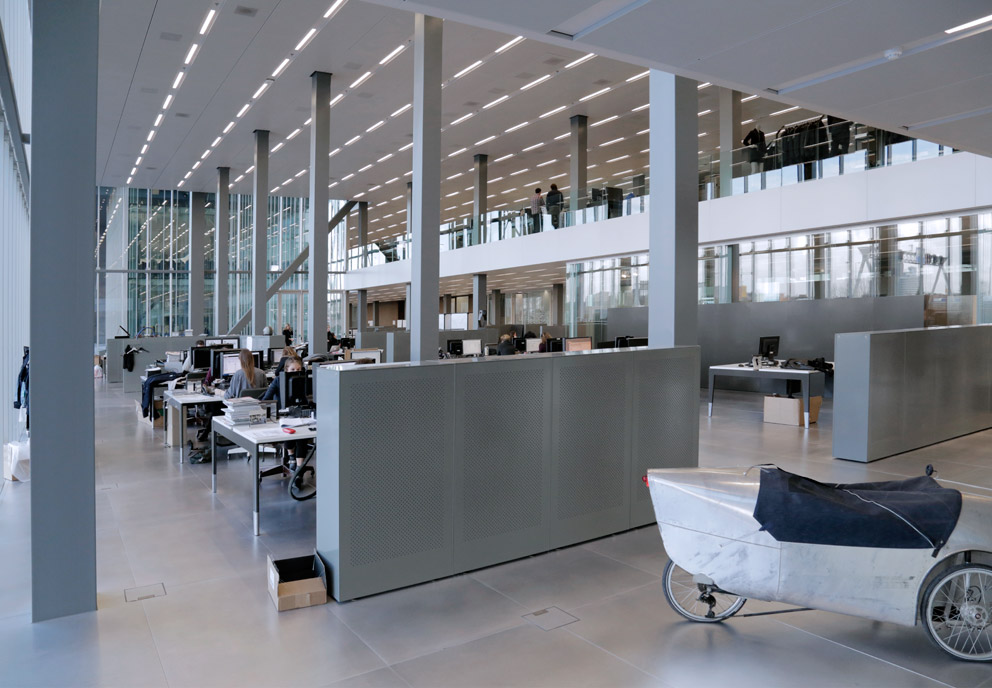 Standard materials for an unconventional construction: steel and glass - everything is based on a 80 x 40 centimeter grid.
Photo © Adam Drobiec, Stylepark 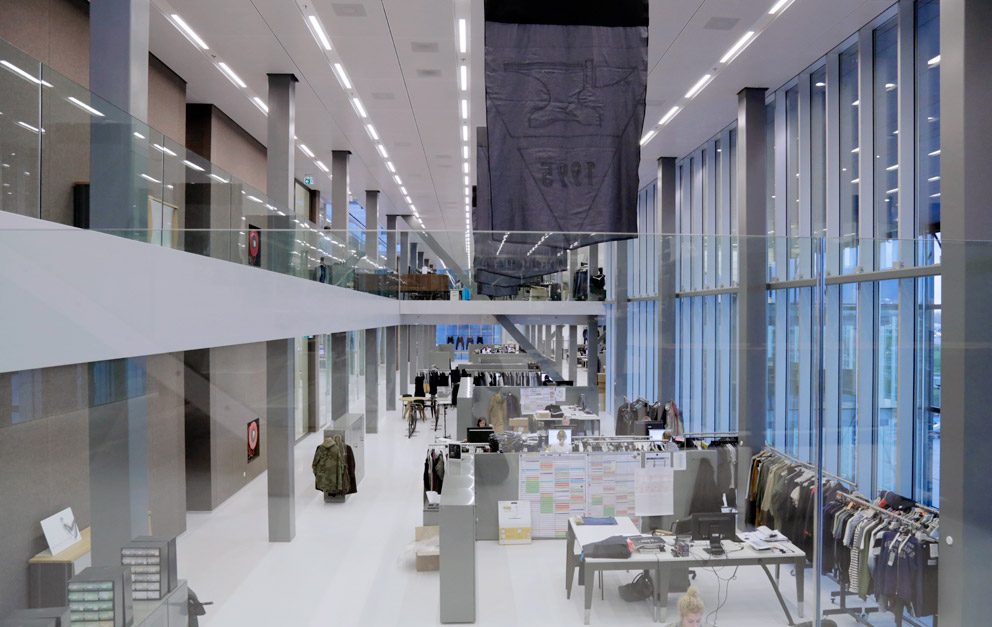 Without the sound-absorbing, suspended ceiling, the surprisingly quiet open-plan offices would have not been possible. Photo © G-Star RAW 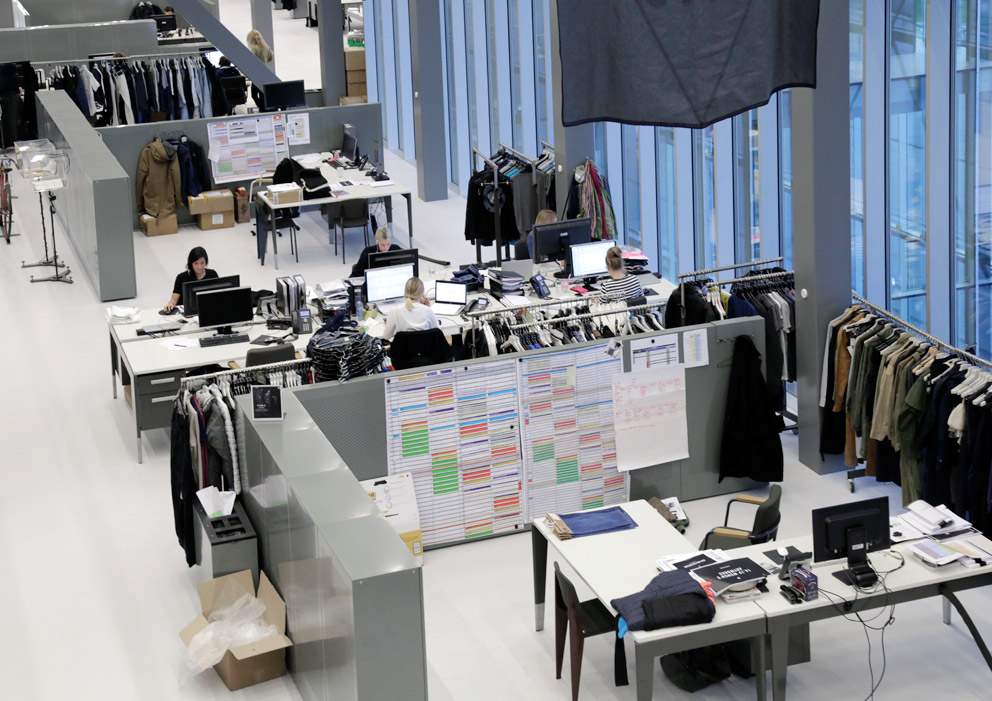 The office furniture has been provided with sound-absorbing materials. Photo © Adam Drobiec, Stylepark 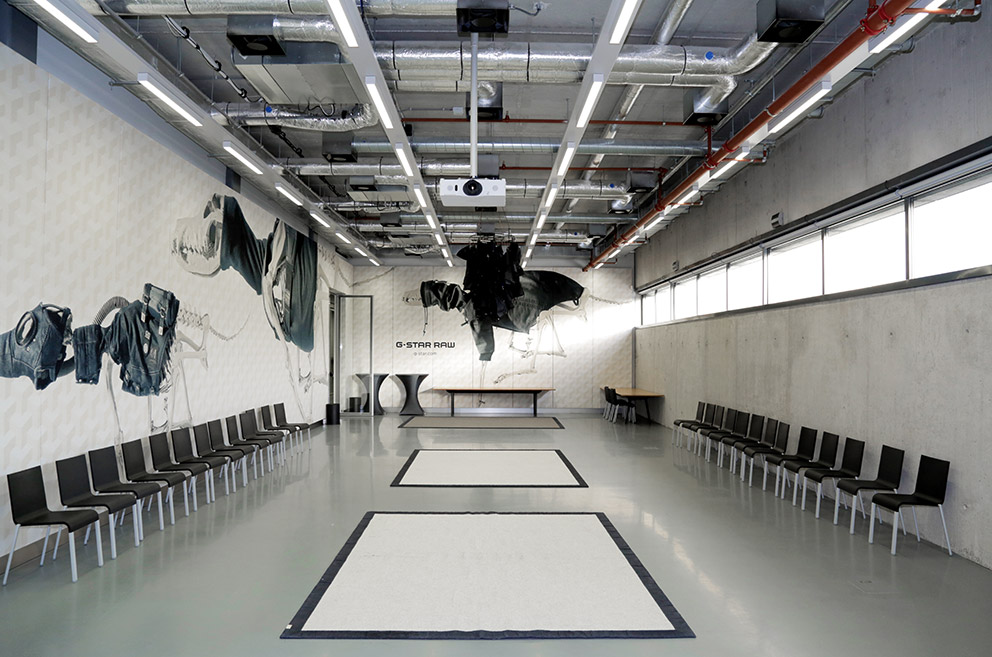 In the basement are a wide range of spaces with flexible functions, f.e. for presentations. Photo © Adam Drobiec, Stylepark 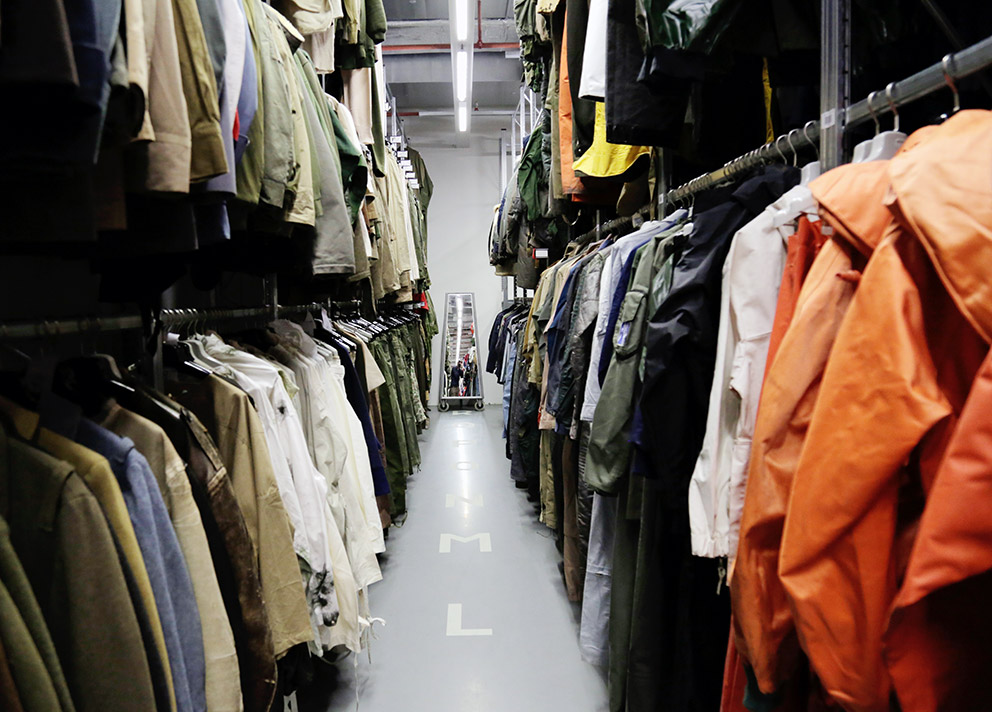 The "sanctuary" and place of inspiration for G-Star Raw is a clothing archive, that has different uniforms, functional clothing and other fashion items in the collection – in some cases more than 200 years old. Photo © Adam Drobiec, Stylepark 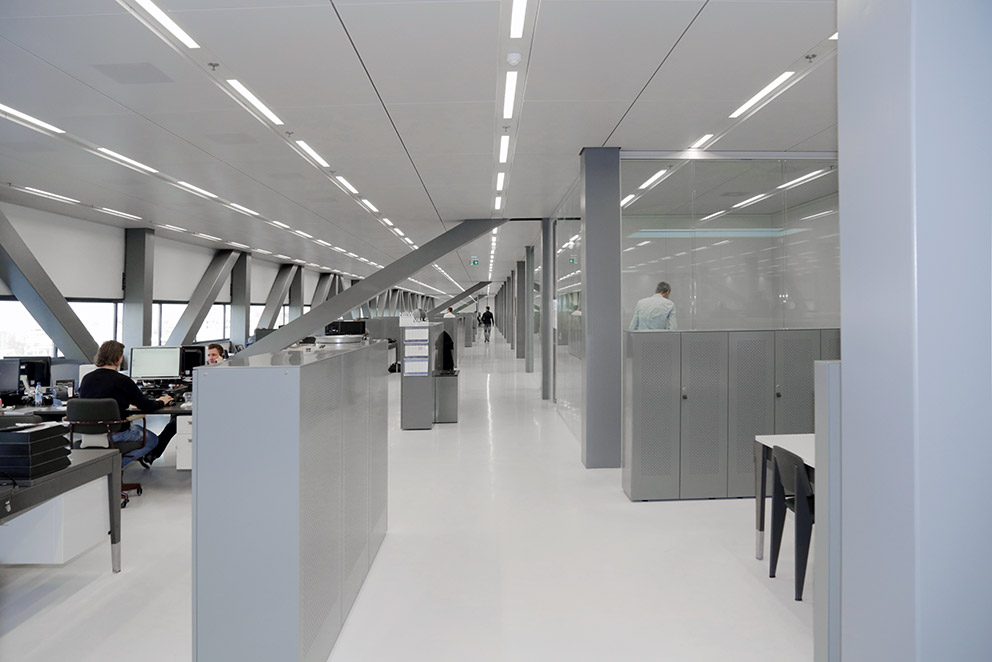 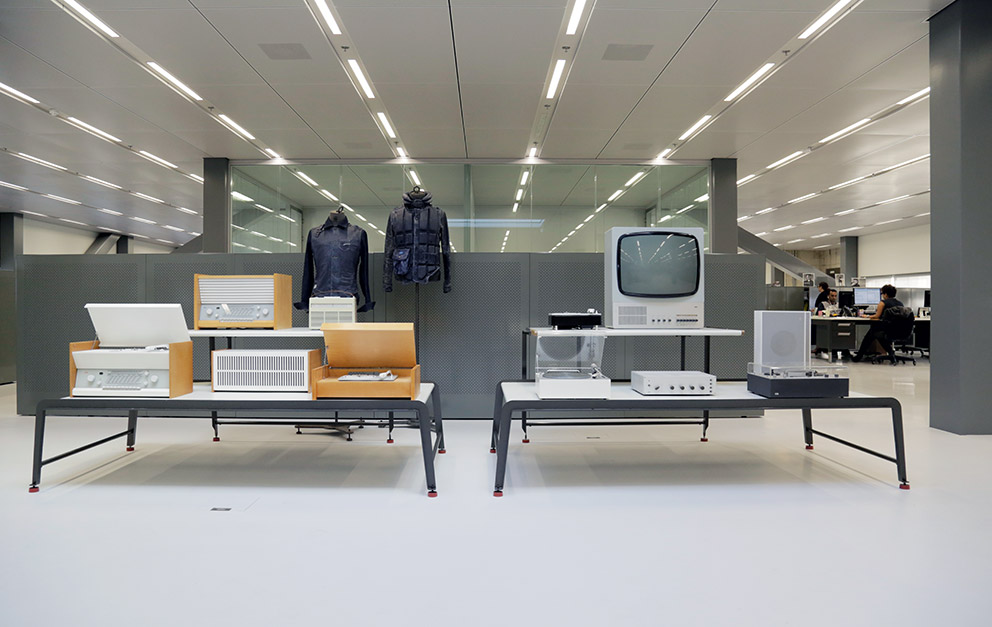 Inspiration on the go: art and design objects are arranged throughout the house.
Photo © Adam Drobiec, Stylepark 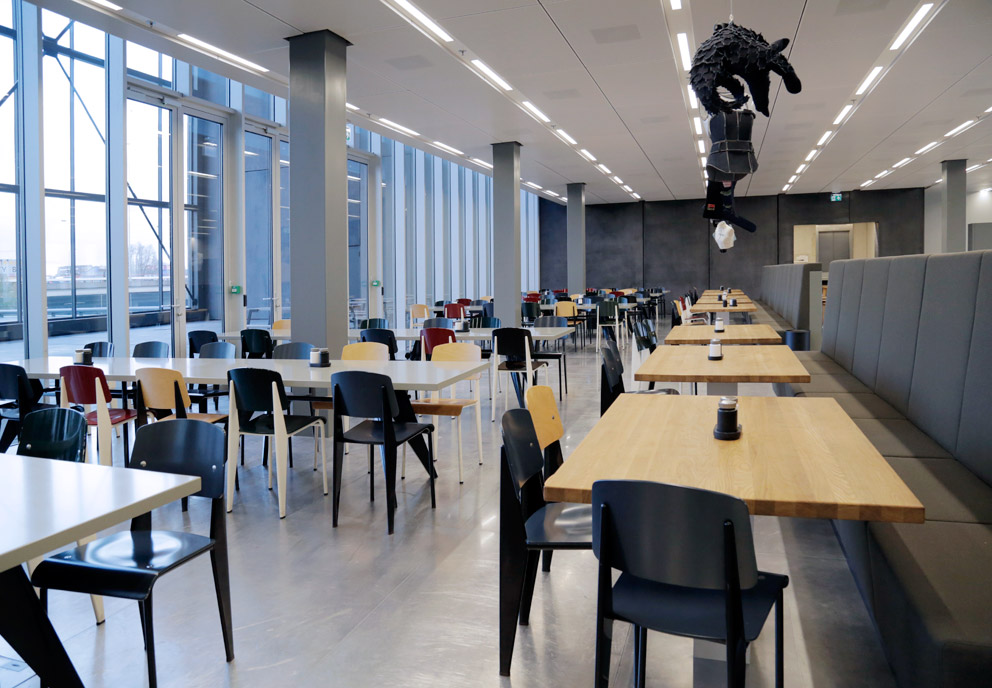 Jean Prouvé as far as the eye can see: Together with Vitra G-Star RAW has developed its own edition. Photo © Adam Drobiec, Stylepark 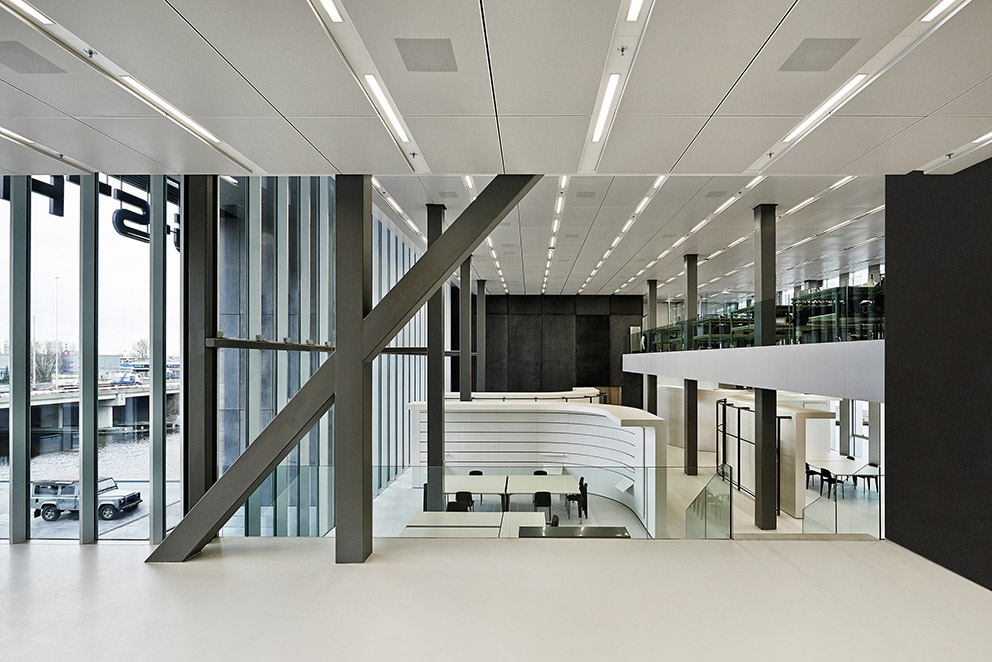 "As for me personally, I like looking at the cars whizzing past on the interstate – it has a very meditative quality to it." Kool said. Photo © G-Star RAW 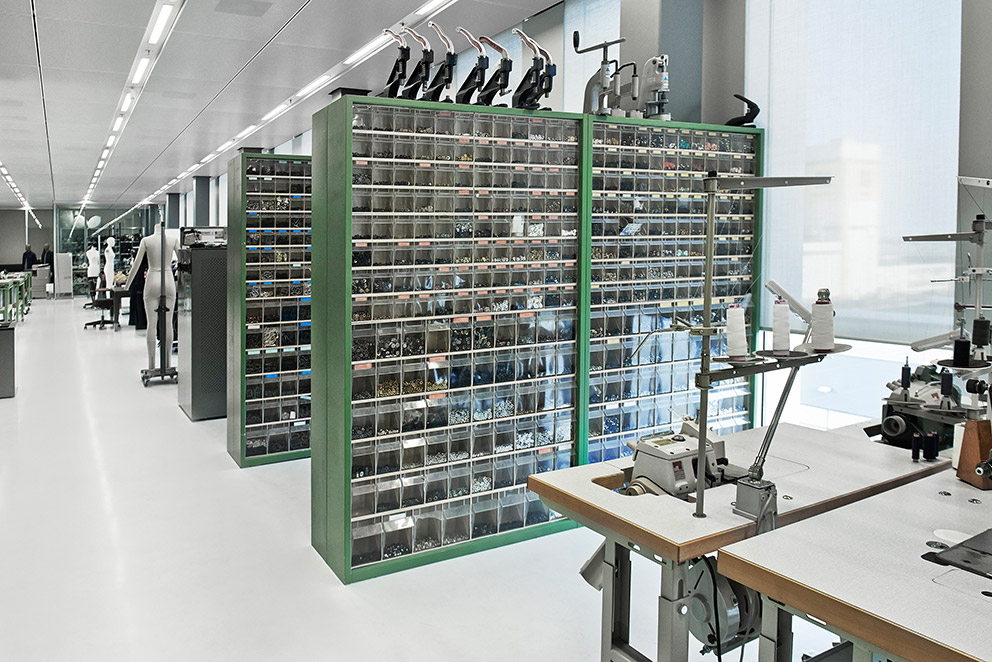 The different needs of all departments to their "work spaces" – at G-Star RAW work f.e. design teams, tailors, marketing and so on – could not have been fulfilled in a typical office building. Photo © G-Star RAW 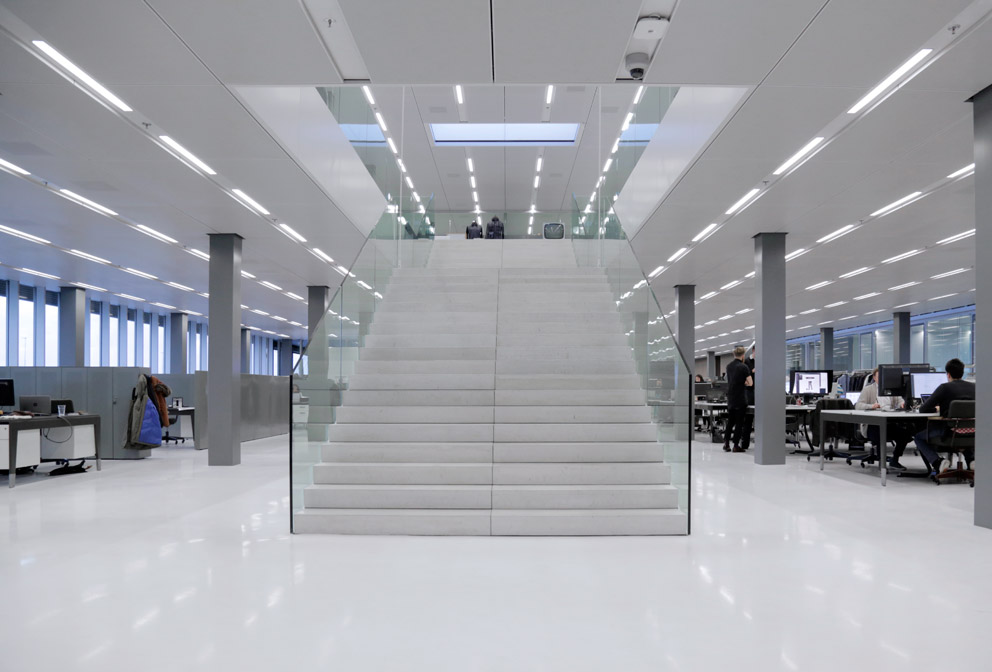 The “lighting strips” have been sectioned into different zones that can be individually adjusted for brightness. Photo © Adam Drobiec, Stylepark 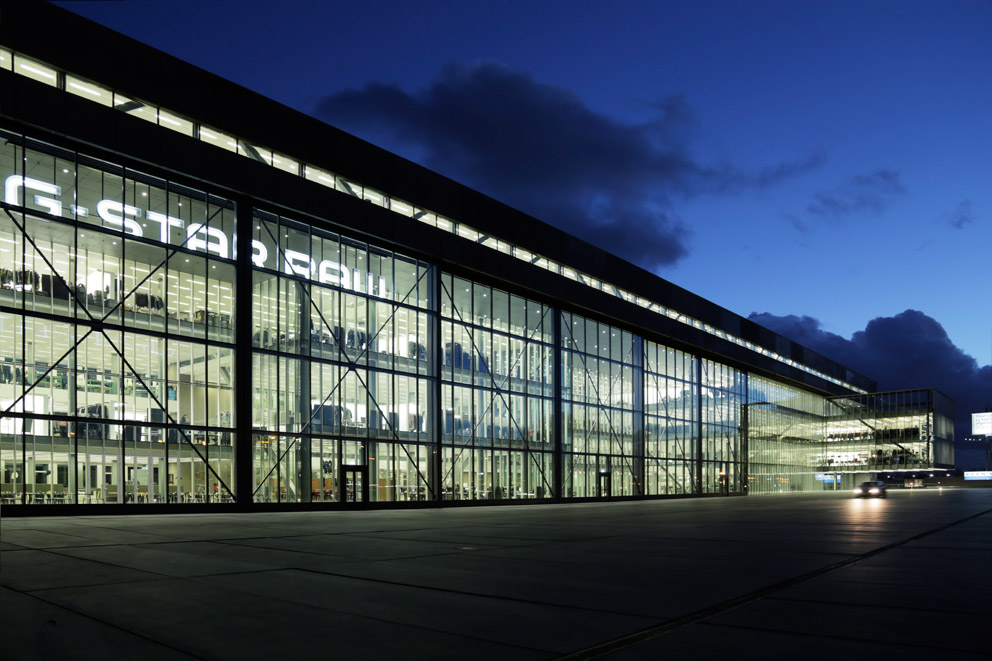 The 140 metres long building is situated next to the A10 in the industrial Zuid-Oost area of Amsterdam. Photo © Adam Drobiec, Stylepark 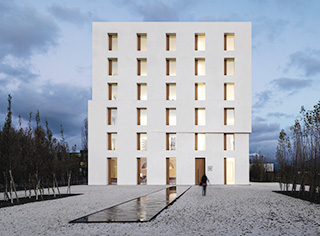 The “2226” office building by Baumschlager Eberle eschews any heating or cooling technology – yet works perfectly well thanks to high-tech features included in sensors and control technology. 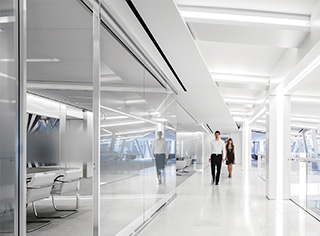 Lighting finesse in the “One New Change” 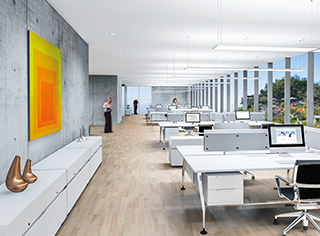 Hot or cold: What light do you prefer? 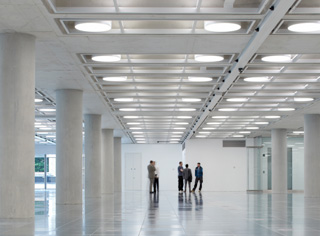 The lighting system shows off the architectural elegance

It is mostly architects and users who are asked their opinion on workspace design. So what does a property developer have to say about tenants’ requirements when it comes to their office premises? Ian Cartwright of Great Portland Estates has the answers. 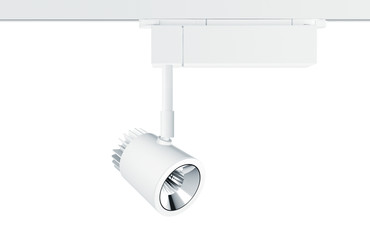 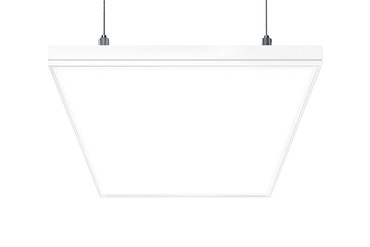 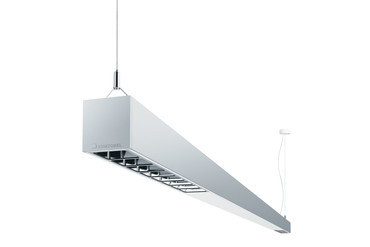 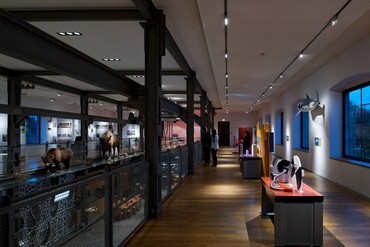 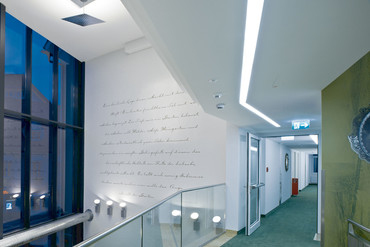 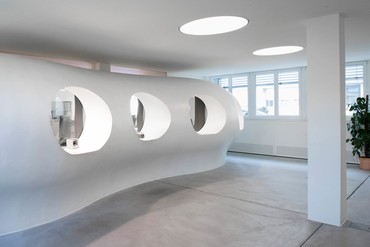