Zvartnots International Airport in Yerevan, Armenia now has a new terminal. The building was designed by Argentinean architects Monsalvo, Karina Luna and Marcelo Minoliti and means the airport now boasts around 52,000 square meters of additional space. The use of high-quality materials and systems for the interior design, ceiling and lighting concepts ensures the start or indeed end of an airborne journey is a pleasant special experience.

The architects were charged with the task of making the terminal as comfortable and pleasing for the passengers as possible; after all people’s vacation or business trip begins here in the airport terminal. This prompted Monsalvo, Luna and Minoliti to choose the lighting systems and metal ceilings made by Durlum, a long-established company based in Schopfheim not far from the German border with Basle, Switzerland. Durlum has already received the Architecture and Technology Innovation Award a total of four times for its work in the areas of ceiling, lighting and interiors.

When it came to the design concept for the ceilings in the airport for Armenia’s capital city of Yerevan, the architects favored the “POLYLAM®” vertical baffle system and the special “dur-GRAPHICS” printing technique, whereby metal ceilings can be specially printed with motifs and textures (in a teakwood effect, for example) to suit the tastes and requirements of each individual client. This particular ceiling system also enabled the architects to regulate the acoustics in the terminal; the number of lamella, their height and width, perforations and filling can be modified to achieve the desired effect.

The ceiling/lighting combisystem “TOMEO-R®” has been installed in the VIP lounge café. Complementing the area’s retro look, the system comprises metal ceiling elements that are round in shape and vary in size, a prime example being the “LUMEO®-R” surface luminaire. Made from “DUROSATIN®”, a flexible and tear-resistant material, the milky surface distributes the light evenly, allowing for a uniform illumination of the space.

The “dur-SOLO” raft ceiling in the new terminal’s security area and arrivals hall provide an additional design highlight. Despite being up to 20 meters long, they are by no means oppressive, and instead signally underscore the overall structure of the space. The raft ceiling elements in the arrivals hall are rounded off at the ends, a new version of Durlum’s classic “dur-SOLO” model. Transitioning from the horizontal to the vertical they slope downward toward the floor and can thus be employed as a creative solution to section off certain areas.

The Durlum products installed here fulfill both the functional and the aesthetic requirements of an open space such as an airport terminal – indeed, the final result certainly bears out how right the architects were in their choice. 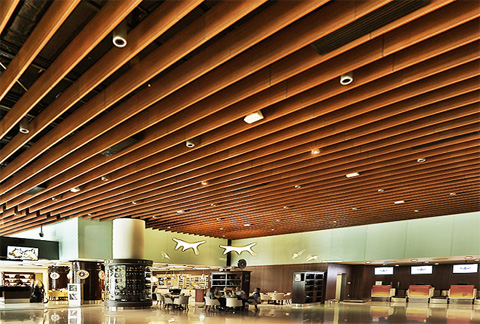 “POLYLAM®”, a sound-absorbing vertical baffle system, can be printed with motifs and textures, such as a teakwood effect, using the “dur-GRAPHICS” system, photo © Artur Hovakimyan 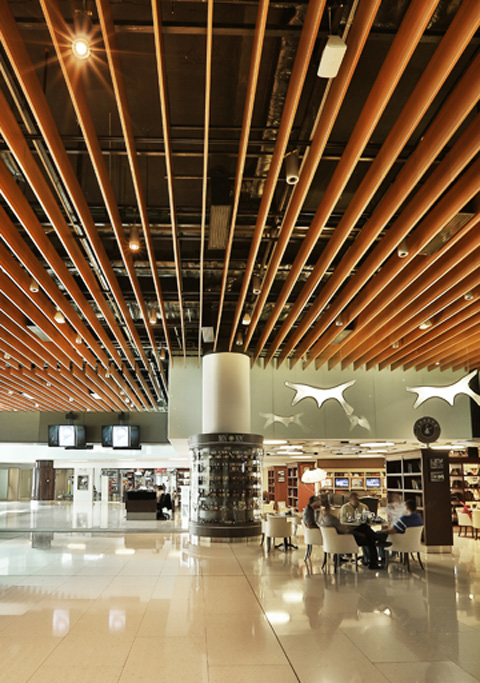 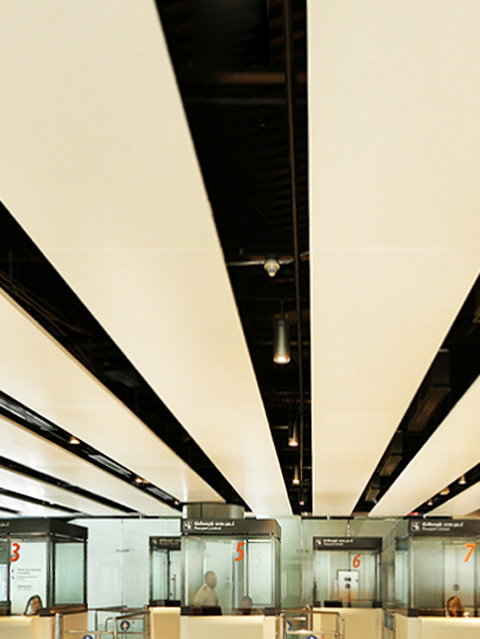 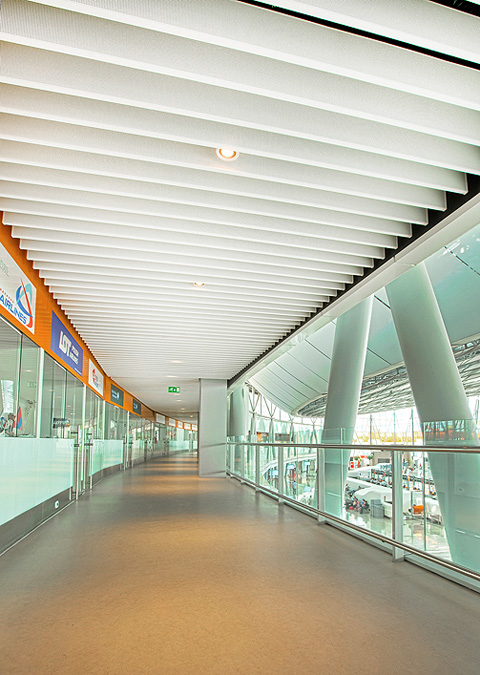 The new terminal at Zvartnots International Airport has been installed with “dur-SOLO” raft ceilings by ceiling and lighting specialist Durlum, photo © Artur Hovakimyan 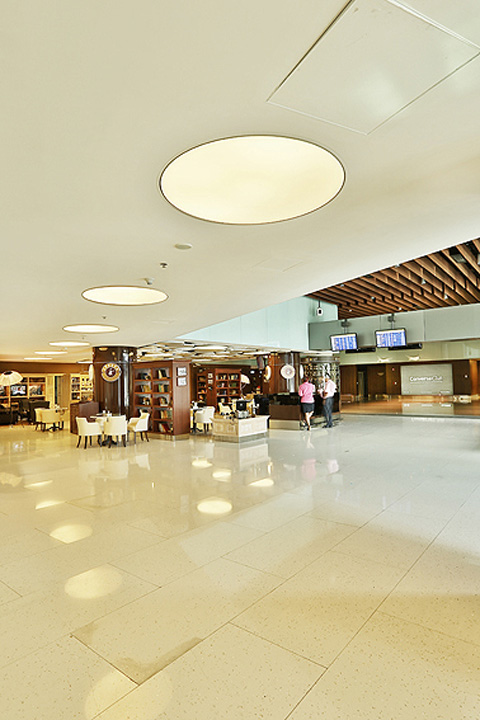 The rounded raft ceiling elements in the arrivals hall are a new version of the classic “dur-SOLO” raft ceilings from Durlum, photo © Artur Hovakimyan 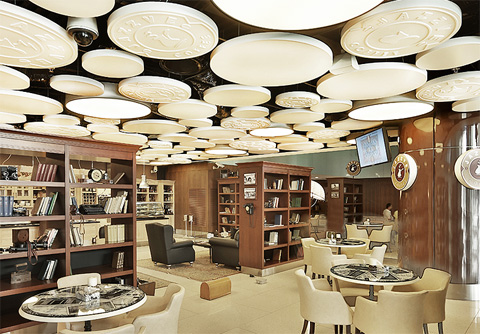 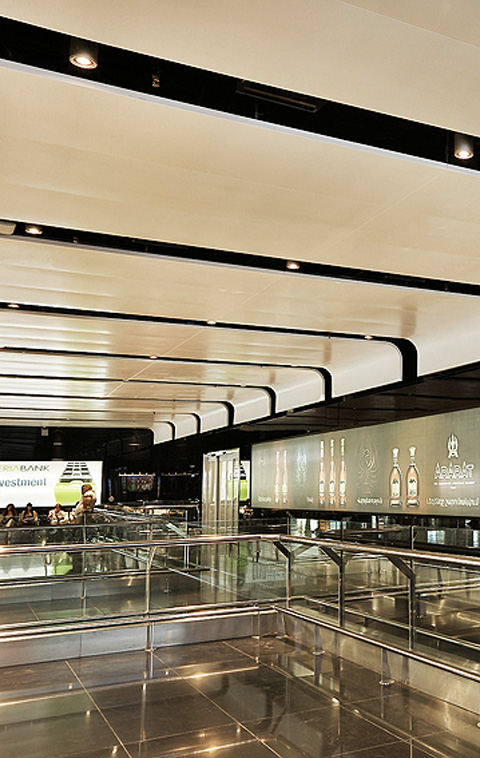 This flush-mounted version of the “LUMEO®-R” luminaires directs passengers to the VIP lounge, photo © Artur Hovakimyan 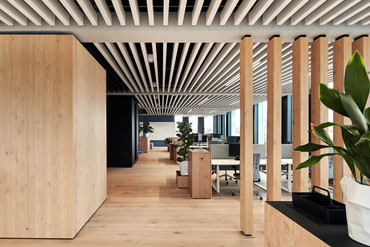 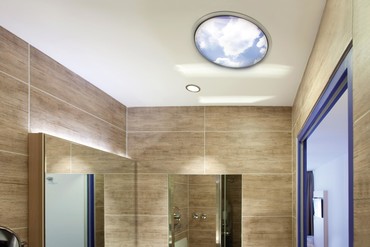 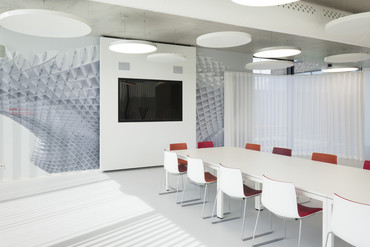