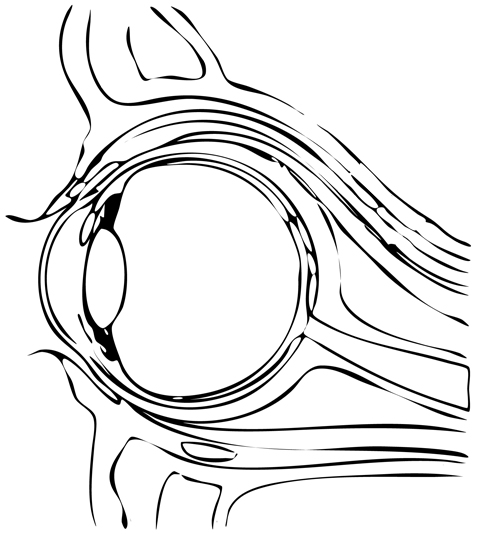 Appearances can be deceptive when we see or perceive something. When we perceive something, we are initially and usually sure that we are not mistaken. We not only believe that what is being presented to us via our senses is true, we perceive that what we see or feel as something that is true, indeed has to be true - we literally "hold it to be true". Yes, we do see or feel what we see or feel. Subjectively speaking, we feel certain we can rely on our perception.
So what do we perceive when something is hidden? What do we see when there is something that we do not or in fact cannot see? Since what escapes our perception does not necessarily have to be inexistent or to have disappeared, we usually simply change the perspective from which we are looking at something. In such cases, we usually replace what we see, i.e. facts, with data. We have invented all kinds of measuring techniques and forms of representation for this purpose, ways of being able to "see" things that we cannot actually see, such as x-rays, scanning electron microscopes or infrared photos. In this manner, we put ourselves in a position where we are able to "see" things that we can basically only know or explain.

To return to the level of perception: Here, the game with showing and hiding is always somewhat reminiscent of magic, i.e., of the art of standing out on stage and making scantily clad women disappear, to be replaced by rabbits wrapped in white fur. And for instance people who know how to arrange mirrors in a particularly clever way are able to produce the illusion that something, let us say a dove, is no longer where we just saw it sitting. Even the current debate on the use of so-called "body scanners" at airports is pertinent here, since these appliances are intended to reveal things that are kept hidden for malicious reasons: weapons and explosives.

Accordingly, however hard we try to trust our perception, its scope does remain limited. And there is a simple test to experience for ourselves that something does remain hidden and withdrawn from our perception when we very definitely do perceive something. With the help of this test it is possible to determine that we can see what we cannot see. The test was publicized by Heinz von Foerster, the inventor of cybernetics using his analogy with the blind spot.

Try it out for yourself. The results are amazing. Take a sheet of paper and draw onto an imaginary horizontal line and about 10 centimeters apart, on the left an asterisk and on the right a dot around 1 centimeter in diameter. Now hold the sheet in your right hand, close your left eye and stare at the asterisk with your right eye. Now moved the sheet backwards and forwards along your line of vision, making a note of when the black dot disappears. Yes, it does disappear. (This occurs, roughly speaking, at a distance of between 18 and 25 centimeters from your eye.) Once the dot has disappeared, continued to stare at the asterisk and move the sheet of paper parallel to yourself; as you will see, the black dot remains invisible.

If your computer screen is large enough you can also attempt the same thing now and instead of moving the sheet of paper you only have to move your head along your line of vision to the screen.

Sociologists can easily explain the phenomenon of the black dot disappearing. At a certain distance of the eye from both the asterisk and the dot, in its projection onto the retina, the dot hits the blind spot on the retina. This is the point where the retina's bundles of nerve fibers leave the eye as the optic nerve. Since there are no sensors here, no "image" can appear in our brain; accordingly, we do not see a dot.

The marvelous thing about this is, as Heinz von Foerster explains, is "that our field of vision appears whole and consistent everywhere. In other words: we cannot see that we cannot see. We are blind to our blindness."

In a very similar way, we have no idea of the technical solutions hidden behind a facade, how sections of facades are suspended, when they can be opened or the fact that innovative roof tiles can also fulfill the function of heat exchanging devices. So architecture also has its own blind areas, its own blind spots. In the coming weeks, taking as our motto "Invisibility - Out of Sight" we will, at this point, be presenting various products and architectural system from all areas of construction, all of them distinguished by the fact that their technical arrangement or their construction is particularly small or compact or, has been reduced to such an extent, optically speaking, that they are either almost invisible themselves or are capable of concealing the fact that they may boast additional functions.

Our concern here is to classify and group together certain phenomena of construction. And whether these be particularly thin window or partition profiles or hidden garage gates, whether acoustical ceilings not recognizable as such reduce the echo in a room or facades and building shells not only form the outside boundary of a building, but also produce energy or regulate fluctuations in temperature - we are usually talking about systems whose technology is highly complex and integrated and whose function has been "hidden". These thus boast not only a technical function but also an aesthetic one. And it is, not least, this aesthetic function that renders the innovative architectural solutions possible and makes them particularly attractive.