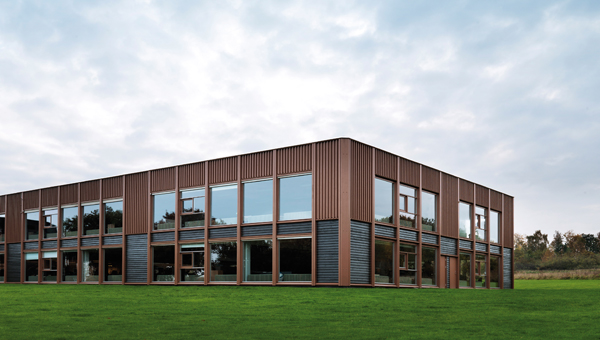 Originally built in the 1970s, the paint factory has been transformed into a business college with an amazingly timeless design. Photo: © Anders Hviid

The architects at Schmidt Hammer Lassen have revamped the spacious interior of a 1970s factory hall to create a superb educational complex that sets new standards. “Innovation Factory” is the name the International Business College has aptly chosen for its new location in the Danish town of Kolding. During refurbishment, the architects took great care to ensure the expansive structure of the hall was maintained, adopting the spirit of the previous owners who pioneered open-plan design in an effort to promote interaction between different sections. Consequently, the manufacturing lines, administration offices and staff restaurant were not designed as separate entities but united under the same roof. Back in 1978, when the paint factory opened its doors, this was quite pioneering.

During the makeover the factory’s minimalist architecture remained largely untouched. Today, different levels, water features and plants introduce a sense of structure to the vast, continuous space. Wooden platforms and fittings made of oak and Douglas fir from Dinesen combine to create an array of communication and leisure zones. As a striking standalone Schmidt Hammer Lassen Architects added an accessible sculptural element to the hall – it extends across two floors and accommodates an auditorium and quiet workspaces under slanted ceiling elements. Above, the V-shaped platform made of Douglas fir from Dinesen provides the base for an amphitheater that can be used for lectures.

The architects have done an excellent job in accentuating the various qualities of the building. On the bottom floor, for example, they have preserved the old production tanks, which French artist Jean Dewasne jazzed up with colorful designs in the 1970s. This open-plan storey serves as a leisure zone and comes complete with a badminton court that needless to say boasts elegant oak flooring from Dinesen. Indeed, Dinesen timber floors are loved the world over and are to be found in Bulthaup’s Showrooms in London as well as in the Brandhort Museum in Munich – and now in the International Business College in Kolding.

Originally built in the 1970s, the paint factory has been transformed into a business college with an amazingly timeless design. Photo: © Anders Hviid 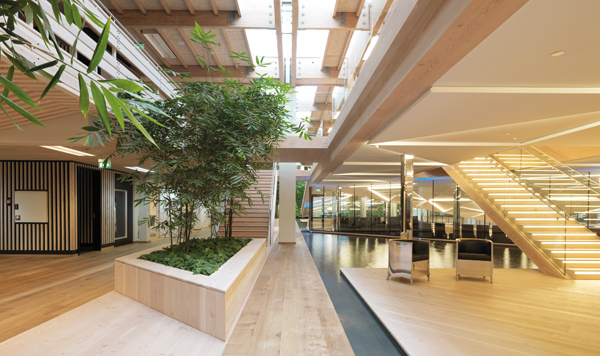 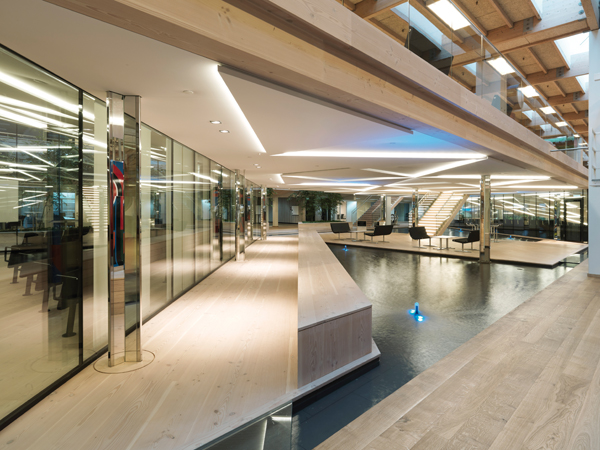 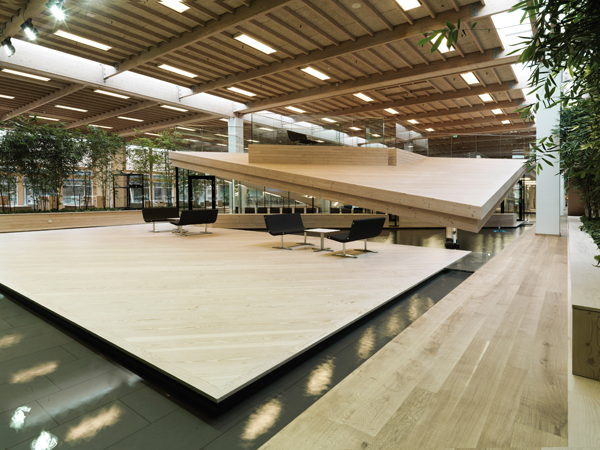 The slanted ceiling elements made of Dinesen Douglas fir wood provide a roof over the auditorium. Photo: © Anders Hviid 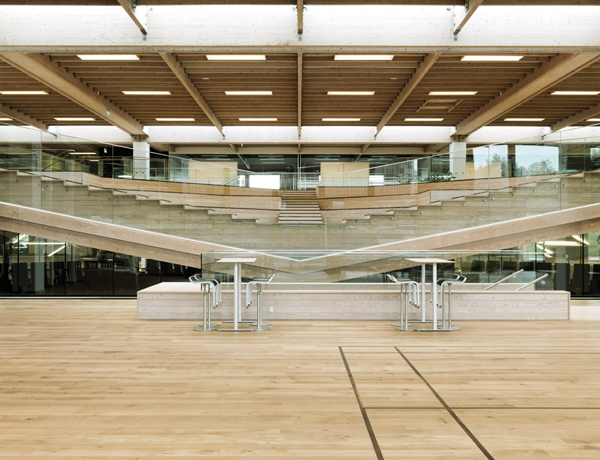 The auditorium’s v-shaped roof doubles up as an amphitheater. Photo: © Anders Hviid 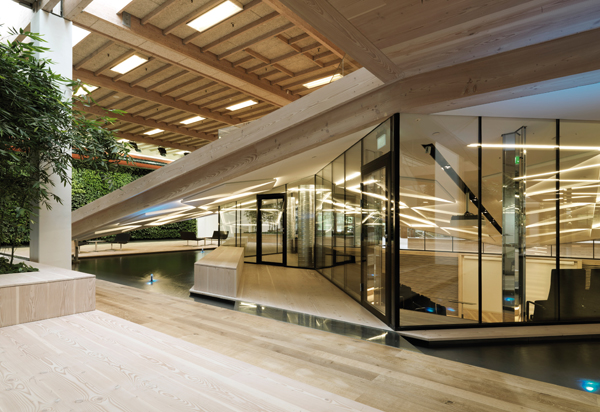 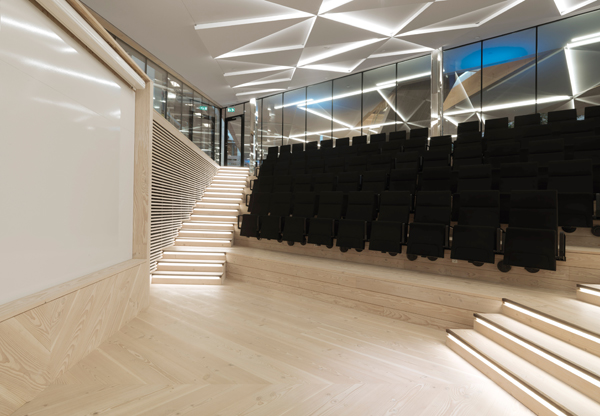 Despite the slanted ceiling the auditorium has surprisingly spacious dimensions. Photo: © Anders Hviid 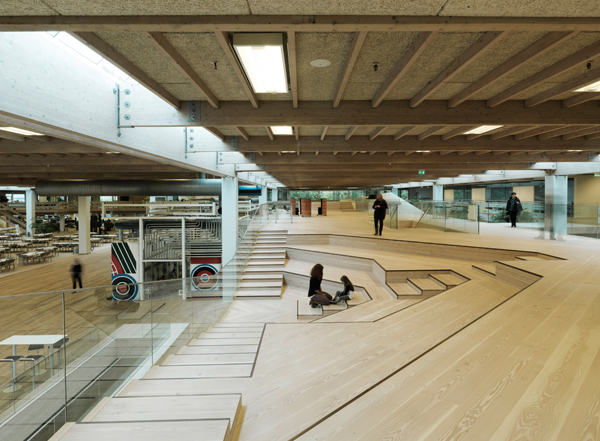 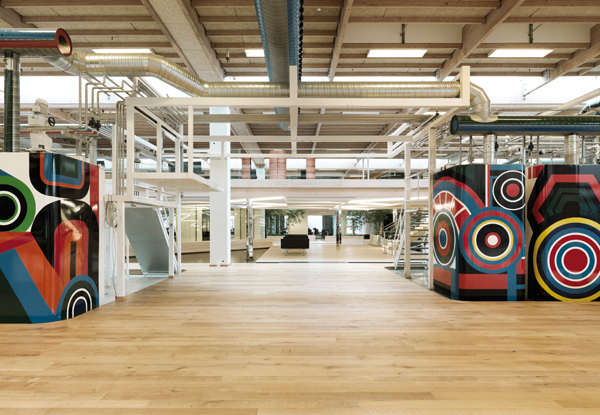 The old paint tanks designed by French artist Jean Dewasne were saved and add a splash of color to the building. Photo: © Anders Hviid 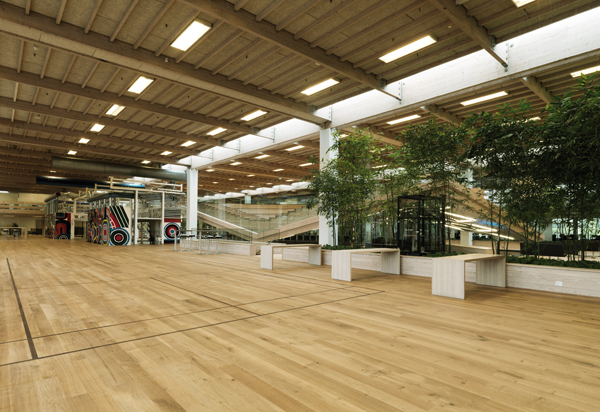 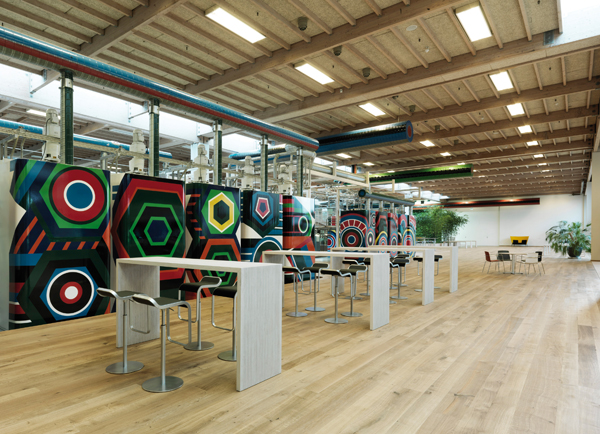 Oak fir are very different woods and together with the bright and colorful production tanks add contrast to the building. Photo: © Anders Hviid
Advertisement