On seeing the rather plain facade of LifeCycle Tower ONE in Dornbirn, Austria, it’s hard to imagine what an unusual structure is hidden inside the building. After all, not only the walls, but also the supports and ceiling beams are made of solid wood. The Tower, also known as LCT ONE, is a prototype. It is the world’s first hybrid timber highrise whose elements are not enclosed. The tower forms part of the research project “8+” by Rhomberg Group, which was initiated in 2009. One of the research findings was that it is possible to build structures of wood measuring 80 meters high and more, thus opening up a new form of urban construction. Because despite having a good energy balance to date timber has scarcely been used for office premises, let alone highrises.

The firm Cree has decided to tap into the potential this offers, and is planning to also employ natural resources for a variety of urban building projects. When designing the prototype LCT architect Hermann Kaufmann had to pay special attention to fire protection considerations and the building’s load-bearing stability. He therefore opted for concrete foundations and the staircase cores, while the ceiling slabs are made of a wood-concrete composite. Once the base and ground floor had been completed, the rest of the building shell – a not inconsiderable eight storeys – was erected in just under two weeks. This rapid process was possible thanks to the use of prefabricated modules.

In other words, the office building is already highly energy efficient by dint of the special way it is made, and as regards operations, the potential savings are huge. The LUXMATE LITENET system by Zumtobel not only controls the light in LifeCycle Tower ONE but also the blinds. What sounds simple is in practice a sophisticated concept to maximize existing daylight and run the office lights as efficiently as possible with potential savings of up to 75 percent.

By means of photo cells and infra-red sensors a device installed on the roof delivers data on daylight intensity and quality, and can even distinguish between direct sunlight and diffuse daylight. Depending on the desired room ambience, the LITENET lighting management system allows the luminaires to be differently dimmed. Depending on the distance from the windows, the daylight is complemented with the required light intensity. With the TUNABLE WHITE luminaires by Zumtobel it is not only possible to alter the light intensity, but also light color intensity to suit the differing daylight conditions. The idea behind the LITENET control system is not only to save as much electricity as possible but above all to emit a pleasant light – an important factor that is especially important in designing office buildings such as LifeCycle Tower ONE. 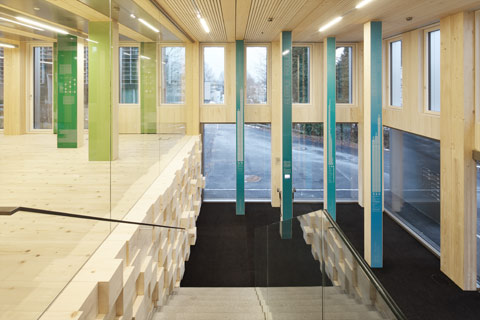 The generous use of wood in the lobby area is a real eye-catcher. Photo © Norman A. Müller 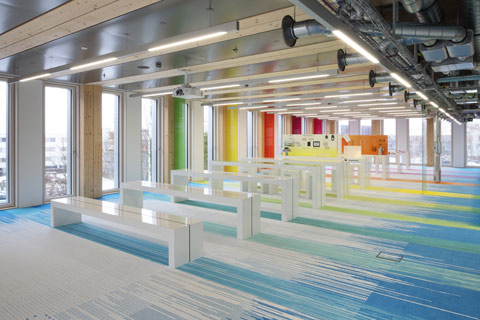 Special attention is paid to the research findings on high wooden building structures and therefore the LCT contains much exhibition space inside. Photo © Norman A. Müller 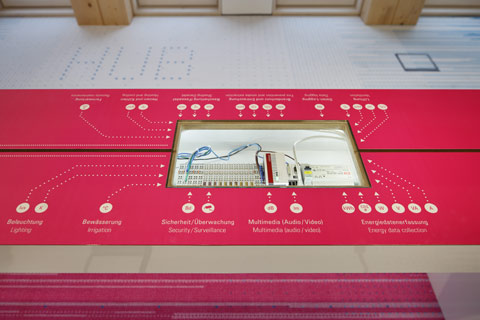 The LITENET regulation system by Zumtobel measures daylight, controls blinds and luminaires, but can also take on other tasks. Photo © Norman A. Müller 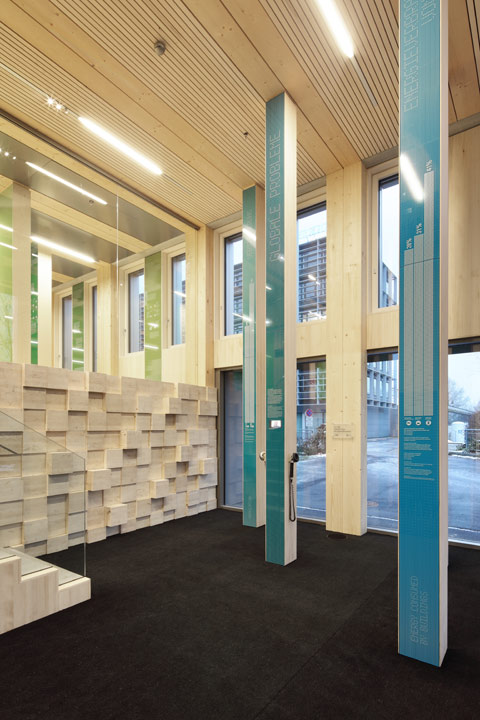 Displays present the LITENET lighting management system, which can reduce energy consumption by up to 75 percent. Photo © Norman A. Müller 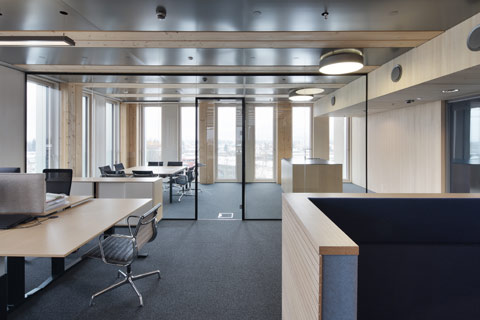 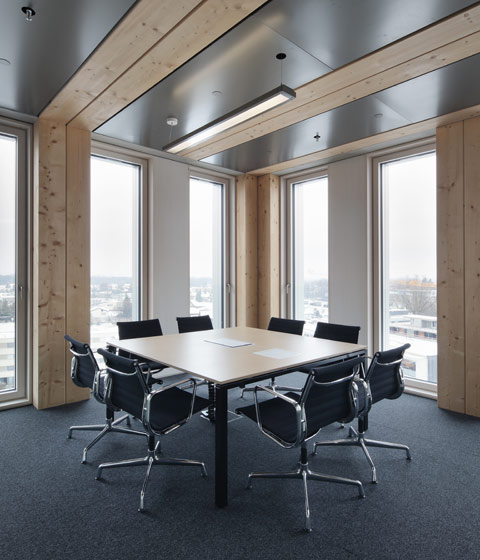 Comfortable to the users, Litenet is regulating the luminaires fully automatic-controlled and adjusted to the daylight conditions. Photo © Norman A. Müller 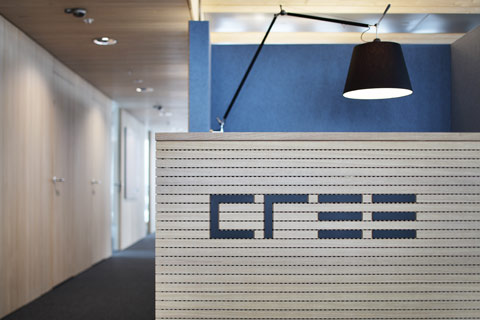 The firm Cree realized LCT to demonstrate that undreamt-of heights can be achieved using a timber structure. Photo © Norman A. Müller 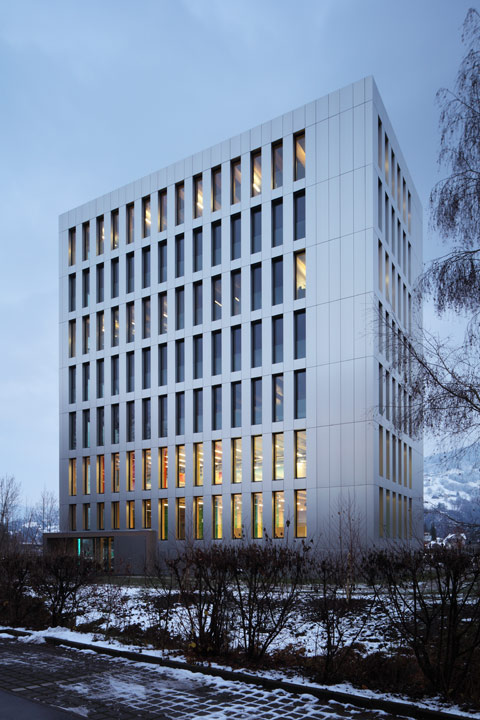 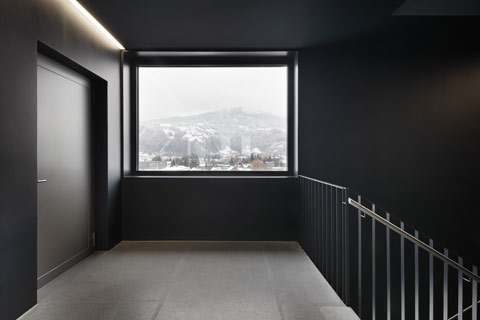 Due to fire protection considerations the staircase cores are made of concrete.
Photo © Norman A. Müller 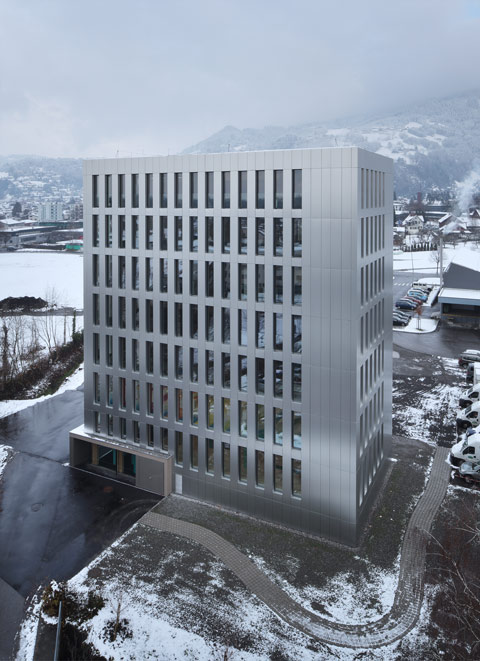 LifeCycle Tower ONE was constructed on the outskirts of Dornbirn in Austria. Photo © Norman A. Müller 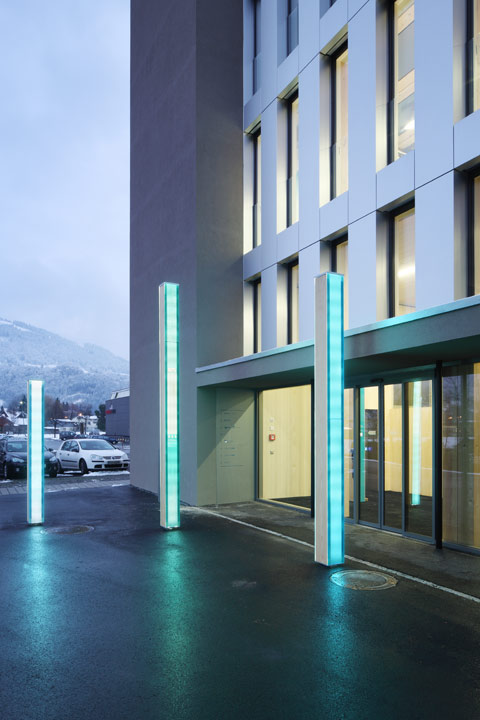 Behind the aluminum facade there is a structure that largely consists of a renewable resource: timber. Photo © Norman A. Müller 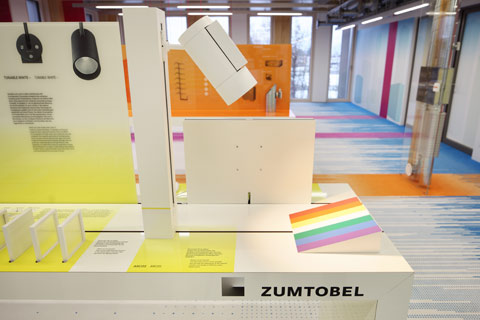 The exhibition rooms highlight the sustainable construction and the energy-saving lighting concept of Zumtobel. Photo © Norman A. Müller 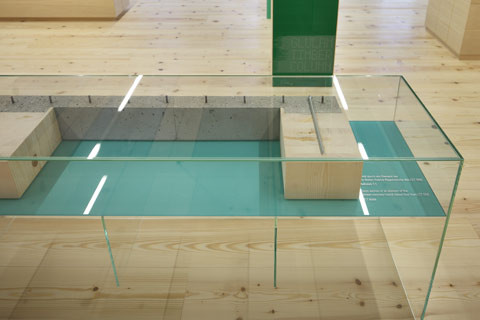 The concrete&timber ceiling slab is presented on a 1:1 scale. Photo © Norman A. Müller 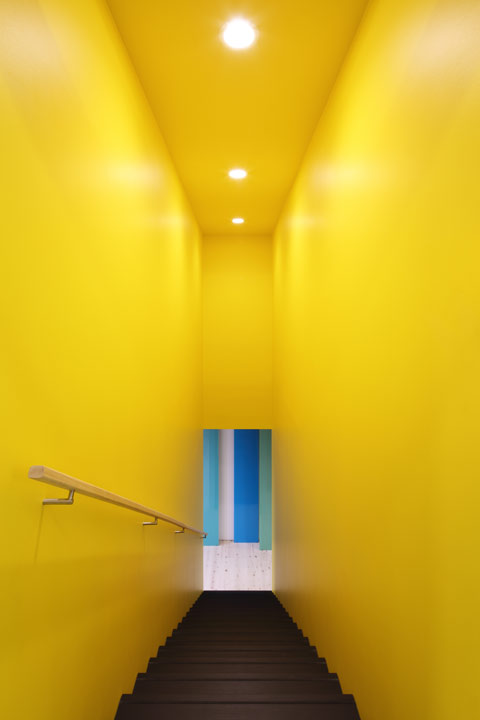 The LifeCycle Tower – known as LCT – shows the potential uses of wooden structures for buildings, higher than 80m. Photo © Norman A. Müller 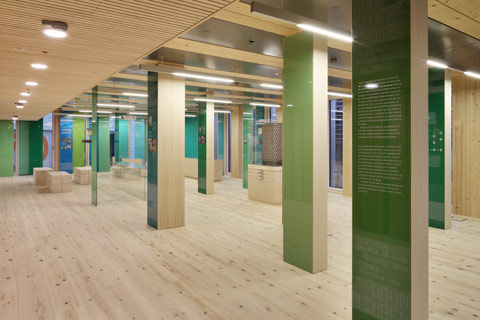 The colored exhibition concept explains light and heating regulation on yellow and red panels, while green elements are used to explain the timber construction. Photo © Norman A. Müller 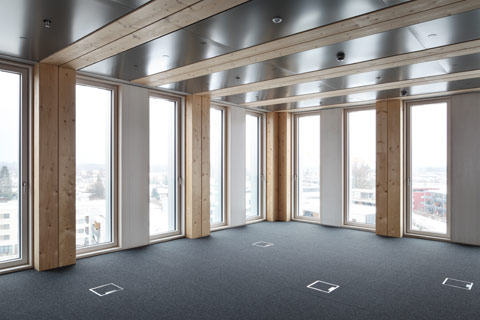 Thanks to the use of prefabricated wood-concrete ceiling elements, the building does not only fulfill the fire requierements but was also erected in an extremely short time. Photo © Norman A. Müller 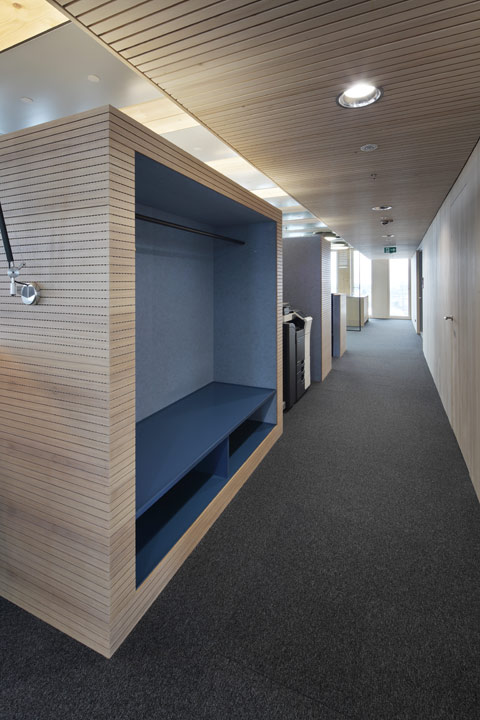 According to the resource-saving building system, parts of the building and interior construction are made of domestic woods, which are spruce and white fir. Photo © Norman A. Müller 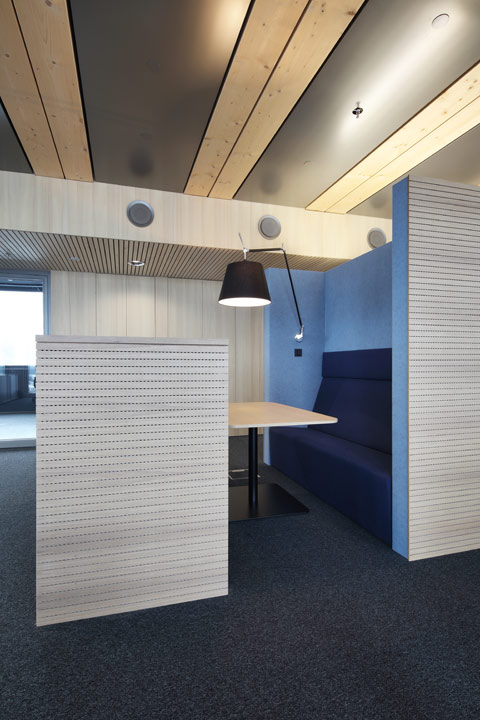 Cree also relied on timer as a renewable construction material for the interior fittings.
Photo © Norman A. Müller
Advertisement