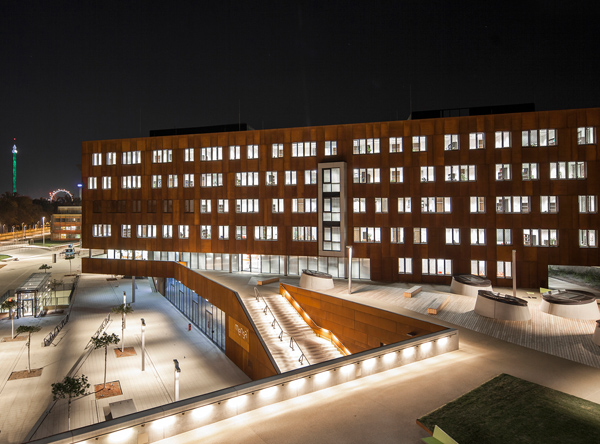 In Vienna, not far away from the city’s Prater Park and the Wiener Messe trade fair complex, Europe’s largest university building project has now been realized. In drawing up the masterplan, the architects at BUSarchitektur and BOA büro für offensive alleatorik joined forces with experts for integral masterplanning. Notable buildings already completed on the campus of Vienna’s University of Economics and Business include Zaha Hadid’s Learning Center and the Department Building by Hitoshi Abe. Together with other buildings, the irregular shaped blocks create a periphery around a central plaza, which the architects define as a place of communication. In line with the architects’ intention, the exterior spaces and the open transition zones inside the buildings fulfil a special role, enticing “students and professors to spend more time on campus again, not at home on the Internet,” explains Laura P. Spinadel, who founded BUSarchitektur. Her idea was to “offer a platform for real networking and discovery.” The same applies to the Auditorium Center, which is characterized by transition zones linking various functional areas, along with the quiet workstations on the periphery of the atrium. The building accommodates all of the university’s lecture theaters, meaning that up to 5,000 people study here at any one time. Alongside the auditoria, which vary in size, there are study zones for students working on their own. The spacious building offers both communal areas and opportunities for retreat. This is where the dimmable LED luminaires by durlum come in, which create various lighting effects for the different zones. Light surfaces and LED downlights provide a relaxed setting or aid concentration in working zones, depending on the use and level of brightness. Lighting requirements in the auditorium are different compared to the student restaurant, where downlights and suspended LUMEO® R LED light surfaces are used.

Interiors are characterized by bright colors; for the façade the architects at BUSarchitektur opted for Corten steel panels which can be illuminated to great effect when it is dark. “Stage” is the term the architects use for an outdoor space that, like its indoor counterpart, can serve as a place of contemplation or interaction. Here too lighting design using durlum luminaires provides the right atmosphere. According to the masterplan, the grounds are destined as a space of exchange, not only for teachers and students, but for all visitors. And yet: “It will take a good few years before we know whether this major project has indeed been a success, namely if it continues to be a place of freedom without limitations that is open to everyone,” says Laura P. Spinadel of BUSarchitektur. 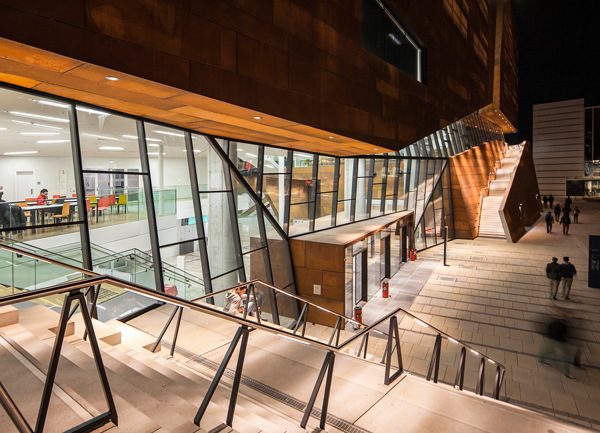 The ensemble of stairs, open spaces and transitional zones creates a communicative atmosphere both indoors and outdoors. Photo © BOANET.AT 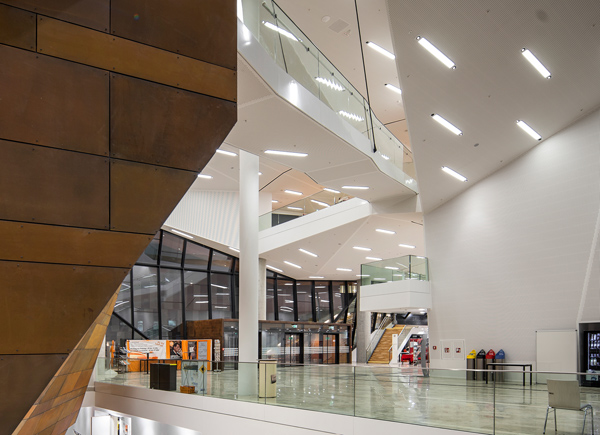 Different zones can be illuminated in varying degrees of brightness thanks to luminaires by durlum. Photo © BOANET.AT 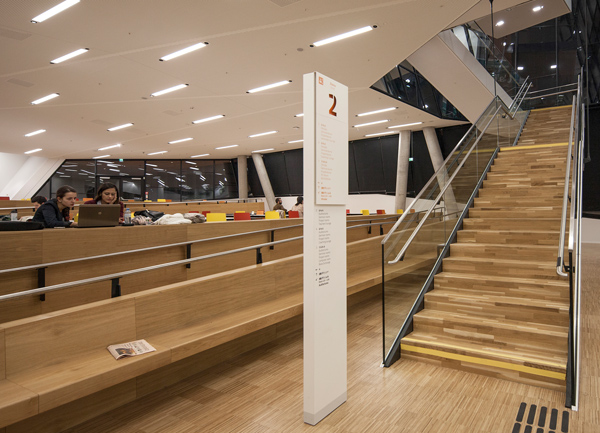 Students need well-balanced illumination to enable them to study on the periphery of the atrium. Photo © BOANET.AT 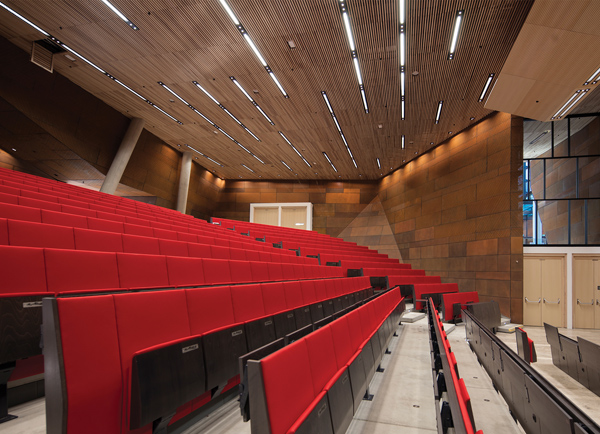 Inside the lecture theater a combination of dimmable recessed luminaires and LED downlights by durlum creates the perfect ambience to aid concentration. Photo © BOANET.AT 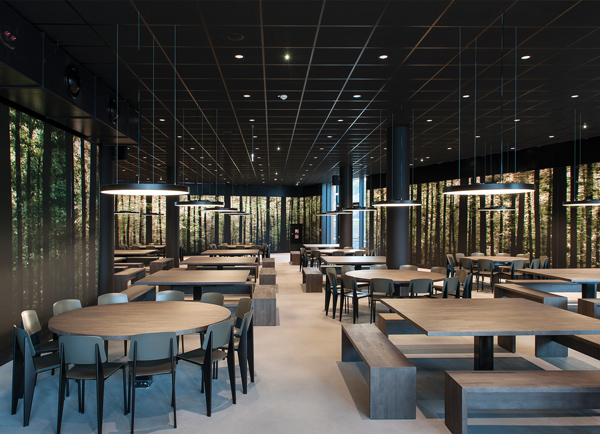 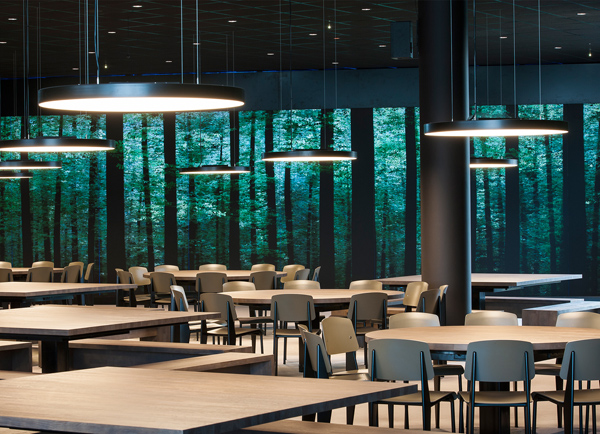 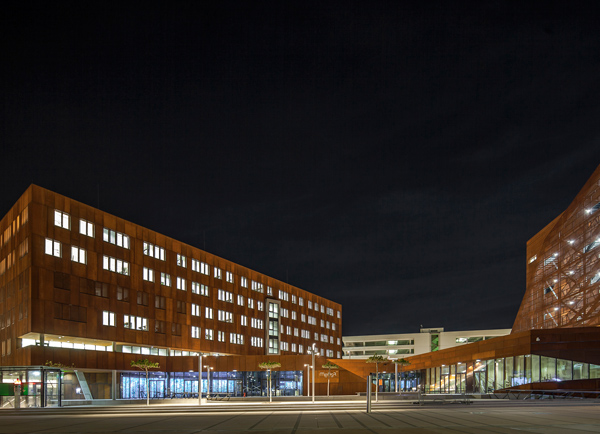 Lighting poles, façade spotlights and ground lighting by durlum emphasize the sculptural character of the façade and give structure to the outdoor space. Photo © BOANET.AT 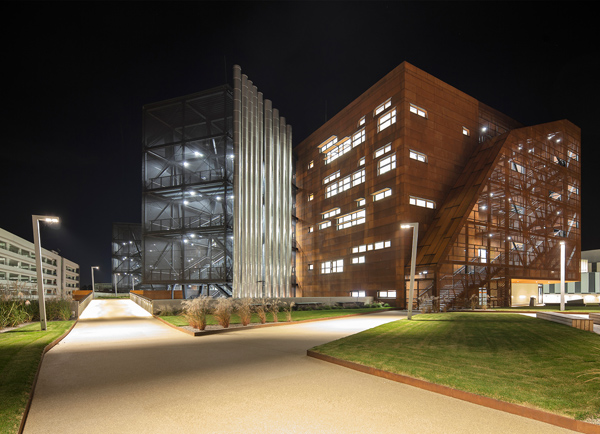 Thanks to the prime choice of lighting, at night the campus still seems inviting and safe. Photo © BOANET.AT
Advertisement