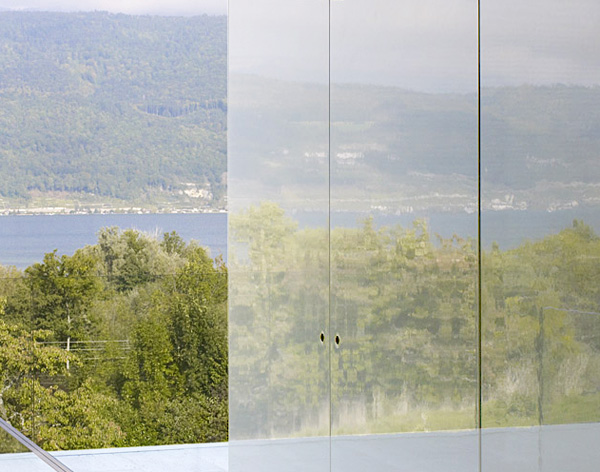 "Design is invisible", determined Lucius Burckhardt as early as fifteen years ago. Behind that familiar and catchy formula is the recognition that design is and should be more than merely a means by which to contribute, within a predetermined context, to the technical improvement and aesthetically pleasing form of things. In Burckhardt's view, it is more a question of also taking the social context into consideration and shaping it at the same time. According to Burckhardt's still-provocative thesis, design always has an "invisible component, specifically an institutional and organizational one, upon which the designer consistently exercises a determining influence, but which remains hidden by the current differentiation of our environment. That is to say that the world is also shaped by the fact that it is classified according to objects and that invisibility is expressed as a marginal condition. In an evolving world of technical objects, the decision not to change institutions is also an act of design: An x-ray apparatus is equipped for use by nurses."

Despite all the differences that can be perceived between design, architecture and individual products - including the new types of architectural systems featured here - they are all characterized by the fact that they exhibit invisibility as a marginal condition. Yet they are invisible in a completely different respect as well, because it is most often their function or their technical mode of operation that is not recognizable at first glance. In a figurative sense, not only the social function of the specific product is invisible; it is first and foremost the often sophisticated technical qualities of a product that are removed from everyday perception and are, in the sense of an optical dominance, invisible. One might call this the "leprechaun effect".

All of the purposes that such products and systems are able to fulfill - whether they enable an unobstructed view of the outdoors from inside a room, whether they dampen noise, allow water to drain, create light as opposed to emphasizing lighting fixtures or heat spaces without adding weight to the building with the machinery or apparatus they need to function - they do so more or less in obscurity. This is accompanied by the fact that the purpose of such a system or object is often not immediately discernable.

What that means is that technology generates its own kind of invisibility that, in turn, also calls for a special design. Certain institutional and social parameters may thereby remain in obscurity, but their implementation allows for the creation of new design alternatives for the architect. All of these systems clearly show that their kind of invisibility, which is ultimately an intelligent form of disguise, opens the door to new possibilities of form. They allow an architect to design rooms without visible heating elements or complex cooling systems, plan facades that are not only attractive but also contribute to energy supply, or achieve pleasing acoustics with a minimum of compromises with respect to the cubature and form of a building and its interior spaces. The "invisibility" of products whose function is removed from our perception clearly engenders a new freedom of design.

All of the products selected and compiled by Stylepark under the title "Invisibility - Removed from Perception" have this effect in one way or another. Considering that the concept of aesthetics refers on the one hand to sensual perception in and of itself, and on the other to the realm of the sensually beautiful and of objects of art, aesthetics play an important role for such products in both senses of the word; first, in that the objects are removed along with their function from our perception, and second, in that the products themselves are well designed and as a result allow certain aesthetic decisions to become at all viable.

Naturally, Mies van der Rohe and his motto "Less is more" come to mind where the aesthetic effect of hidden functions and qualities in architecture is concerned. Design and execution are about being able to make aesthetic decisions as comprehensively and with as few restrictions as possible, and being able to forge new paths in design. Therefore, the aesthetic function of concealed systems lies first and foremost in promoting that objective.

This may, but must not necessarily, result in a minimalist aesthetic and a kind of purification. Neutrality is as important an aspect of the appearance of such systems as is a certain degree of simplicity, whereby simple means something completely other than primitive. After all, many products that appear to be pure and simple in form are technically highly complex. A certain degree of sophistication is therefore necessary in order to allow something to appear simple or to blend into the background. In this context, certain products are by all means part of a certain tradition. Because, as we have been taught by history and theory, the simple and the purist are no more invariables of architecture than are decoration or material fidelity.

A prime example for the effect a reduction of visible functions can have is most certainly that of window frames that are so delicately designed as to be as good as imperceptible. The insulated sliding windows by the Swiss firm R&G Metallbau with the name Sky-Frame are worth mentioning: the narrow frame enclosing the large-surface glass panels of this sliding window system can be installed flush with walls, ceilings and floors, so that only a vertical glazing bar just 20 millimeters wide remains visible. On the one hand, this has the effect that one can completely forget one is looking through a window when looking outside, and on the other hand, that the cutouts in the facade can themselves be perceived as a sort of aesthetic frame. An image of the landscape outside takes shape within this ‘frame of the sky', and one has the impression of not being separated from it at all. As such, Sky-Frame fulfills the dream of many classical modern architects, who were always interested in making the boundary between inside and outside as transparent as possible, or even in eliminating it optically. Sky-Frame now offers the possibility of glazing buildings from wall to wall and, by way of floor-to-ceiling glazing, of creating a light-flooded, fluid transition between, for example, living or dining area and terrace.

A similar effect can also be achieved in interior spaces, as is demonstrated by the glass room partitions RF Corridor Wall, designed for Bene by Johannes Scherr. Here as well, transparency is the striking quality, and transformations of an institutional, organizational and communicative kind grow out of a seemingly purely functional design. It is thus possible to optically expand the horizontal quality of a room while preserving the character of openness. And, because a room within a room can be separated acoustically while maintaining the optical connection to its surroundings, those working there are neither isolated nor socially removed in terms of communication.

One can see, therefore, that aesthetic decisions are as much inseparably linked to practical ones as, conversely, every seemingly simple, practical decision leads to undeniably aesthetic consequences. This is precisely what makes products that make no or minimal aesthetic demands for themselves, that even go so far as to liberate the architect from many a burden, so interesting. 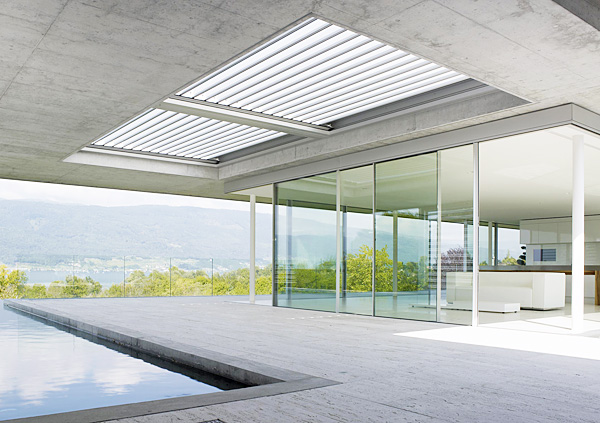 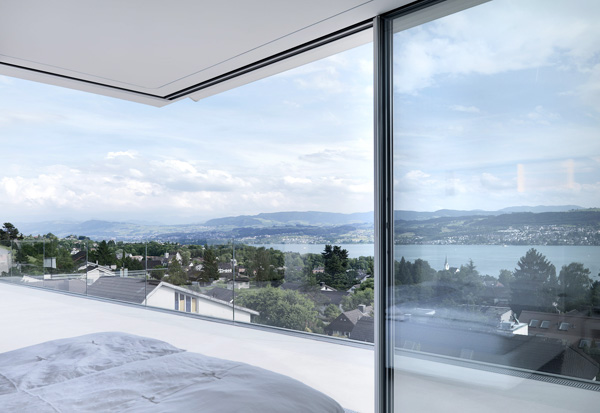 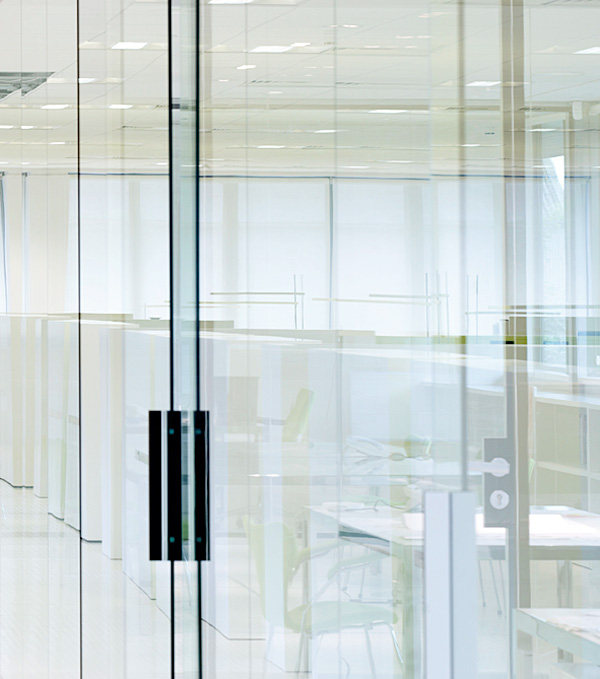 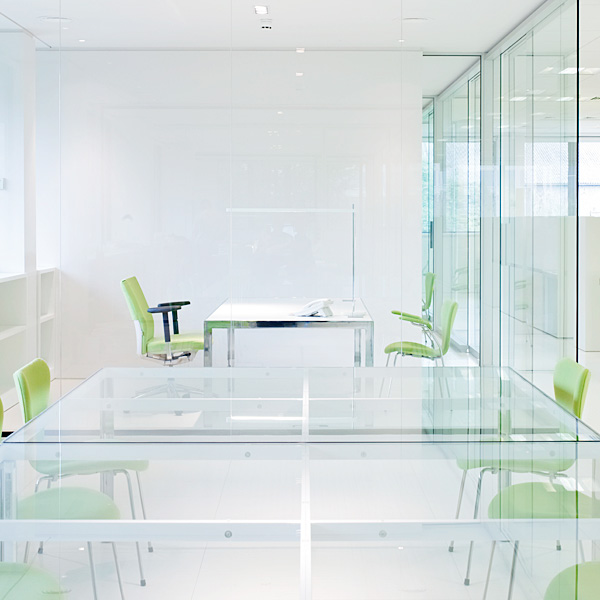