Zigzagging through the office: The various kinks in the shape of the new building for the headquarters of the Volksbank Bozen demanded a carefully considered interior so that employees could swiftly get their bearings in the unusually shaped rooms. Metal ceilings with organically shaped silhouettes and integrated downlights from Durlum are part of the aesthetically appealing spatial design, which the interior designers realized under the motto “Space for Dialog”. Local architect Christian Rübbert designed a two-wing building with an irregular floorplan destined to fill the gap between industrial buildings and the shunting station on the River Eisack. When construction was completed, interior design firm Bergundtal from Bruneck and the design team at Innocad in Granz faced the challenge of setting out the four storeys with a total of 8,000 square meters of floor space to make them user-friendly. They developed open, clearly arranged zones for the ground floor, incorporating the foyer, the reception desk and the cafeteria, as well as various meeting rooms, which constitutes the public area for clients.

The staff offices on the top three storeys were also designed as open spaces, thus enabling straightforward exchange, with telephone booths and seating recesses, as well as areas for peace and quiet where needed. On each floor, core zones with staircases, washrooms and photocopying points serve as orientation within the extensive spaces. The interior designers highlighted these core zones visually too: The wall covering in these areas is adorned with a graphic pattern in black, which was designed especially for this project by Italian artist Esther Stocker. One striking design element on the ground floor is the timber-clad counter conceived as an inviting spot for informal discussions. Here the interior designers installed the distinctive metal ceiling “Loop” with integrated “Punteo J85 LED Downlights” from Durlum, which visually emphasizes the intermittent white of the surfaces and thus distinguishes the area as a central zone.

With their gray-and-white powder-coated design, the suspended modular panels form a consistent surface on the ceiling with organically formed silhouettes, which are selectively illuminated. The five-millimeter-high indent of the round openings skillfully conceals the ceiling void, which contains noise-absorbing acoustic panels to ensure optimum acoustics in the space. The ceiling and light combination represents an ideal solution not only in aesthetic terms, but also contributes to the wellbeing of employees. The reason: The colour of the light from the small inbuilt lighting units varies throughout the day from cold white to warm white, and thus simulates the natural variation in the daylight. (sb) 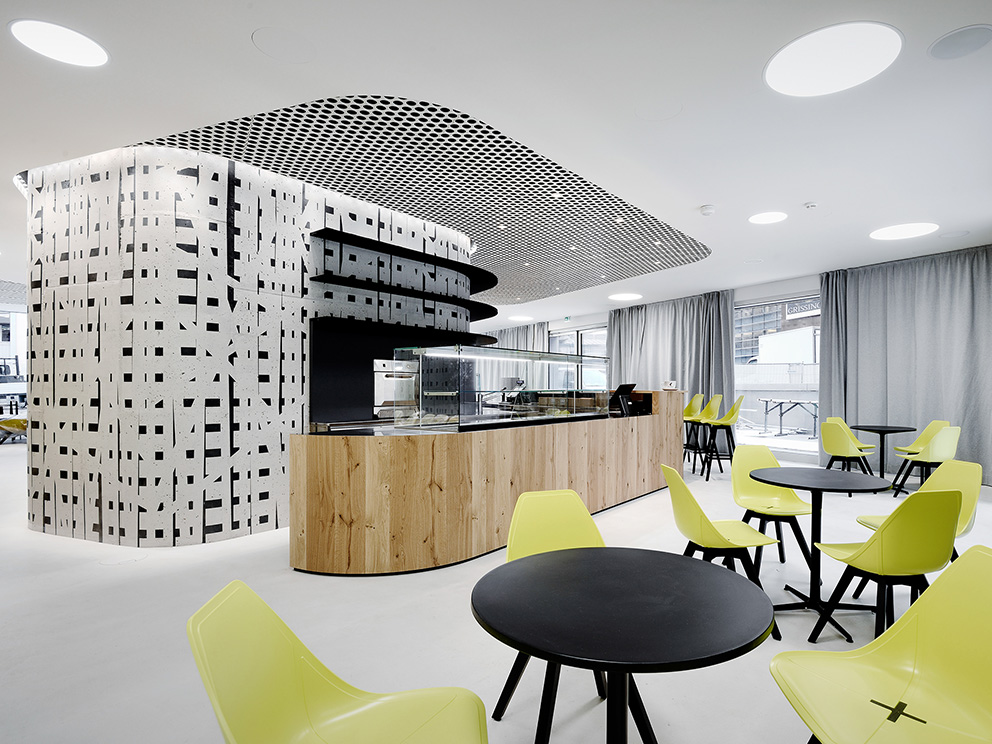 An irregular floor plan and extensive open spaces – these are the defining characteristics of the new headquarters of South Tyrol’s Volksbank Bozen. Interior design firm Bergundtal and the team at Innocad established individual zones in the interior and created homely features, such as the lime green chairs depicted here, especially for the project. All photos © Oskar Da Riz 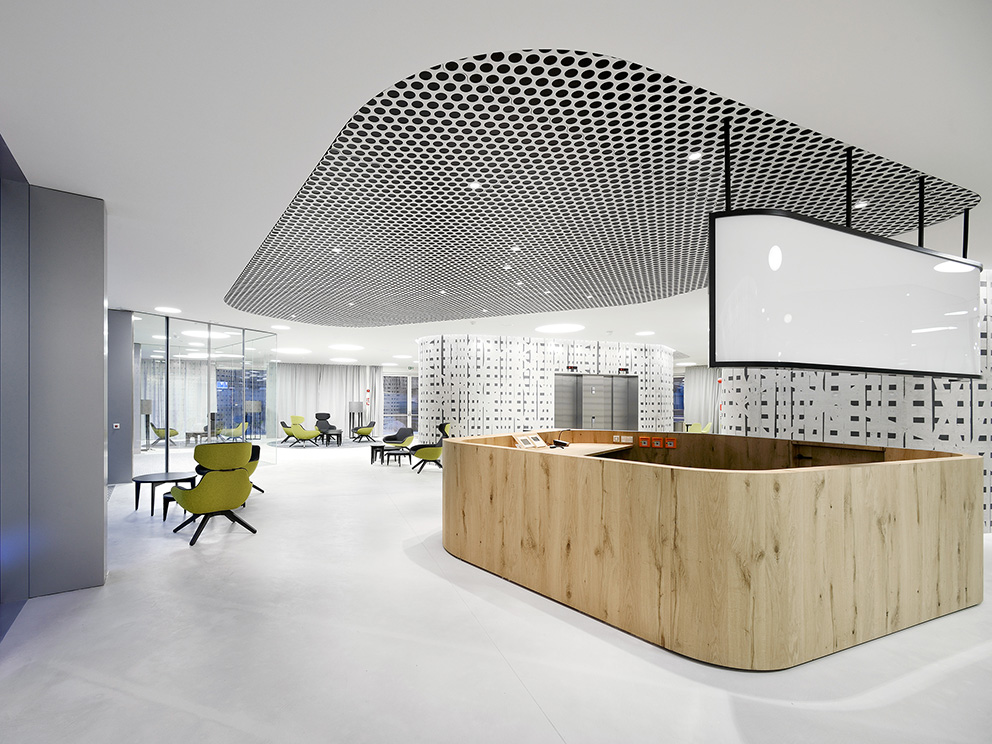 A view of the ceiling: “Loop” metal ceiling including integrated “Punteo J85 LED Downlights” from Durlum. The system consists of individual aluminum zones, which were created with a magnetic substructure and dovetail perfectly with the soft, semi-rounded contours to create an apparently seamless ceiling.

A perfectly placed desk: The wall covering with its graphic pattern designed by artist Esther Stocker harmonizes optimally with Durlum’s distinctive metal ceiling, while the colors of the desk and ceiling stand out from the white surfaces of the interior, thus distinguishing a core zone within the open space. 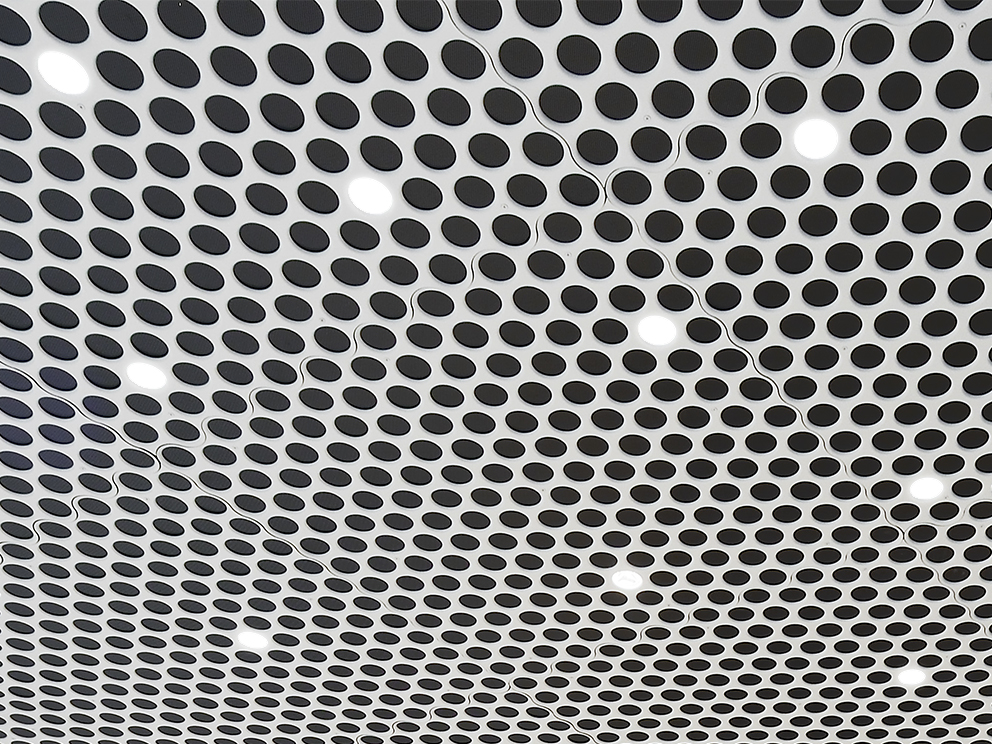 The curves of LOOP are especially suitable for integration of the LED-based PUNTEO-J downlights which can be used not only to illuminate the rooms but also to create accent lighting without visual disruption of the ceiling image.