Be they decorative or functional, the modular spotlights and luminaires from manufacturer Occhio truly present Vienna’s “Lumar” living house in the proper light: On behalf of Lumar IG, a Slovenian construction company for low-energy and passive-standard buildings, in 2015 architectural company Sono Arhitekti designed a two-storey, sharp-edged building consisting of two cubes slotted into one another and topped by a spacious, inviting roof. Ceiling-high windows and an open floor plan of around 180 square meters of living space ensure the architecture appears bright and inviting. Warm parquet flooring throughout the ground floor, where living, dining and kitchen areas flow seamlessly into one another, creates a homely atmosphere and forms a rich contrast with the otherwise black and white color scheme of the spaces. In the living area, a wide staircase leads up to the gallery on the upper floor, becoming a true eye-catcher with the extensive wall-cladding.

The surface-mounted “Più alto 3d” ceiling lights from Occhio bathe the oak on the wall in an atmospheric light and create exciting accents with their cones of light. Thanks to the “3d Kinematik” specially developed by Occhio, the head of each light is particularly mobile, so the residents of the house can set them up individually as they prefer. In addition, users can choose between various different light colors. The artworks on the wall in the dining area are also illuminated superbly by the “Più alto” spotlights – thanks to the flexible joint that permits rotation by 360 degrees. The edge-free, in-built design of “Più piano seamless”, which the architects chose to mount flush with the ceiling, ensures good orientation in the corridors. Its two-dimensional light with 3,000 Kelvin emphasizes the architecture and sets the perfect tone for it. Another particularly decorative element is the “Sento sospeso” pendant luminaire above the dining table, which can be fixed at different heights and permits a wide variety of light scenarios in the house thanks to its touchless dimmer function. (sb) 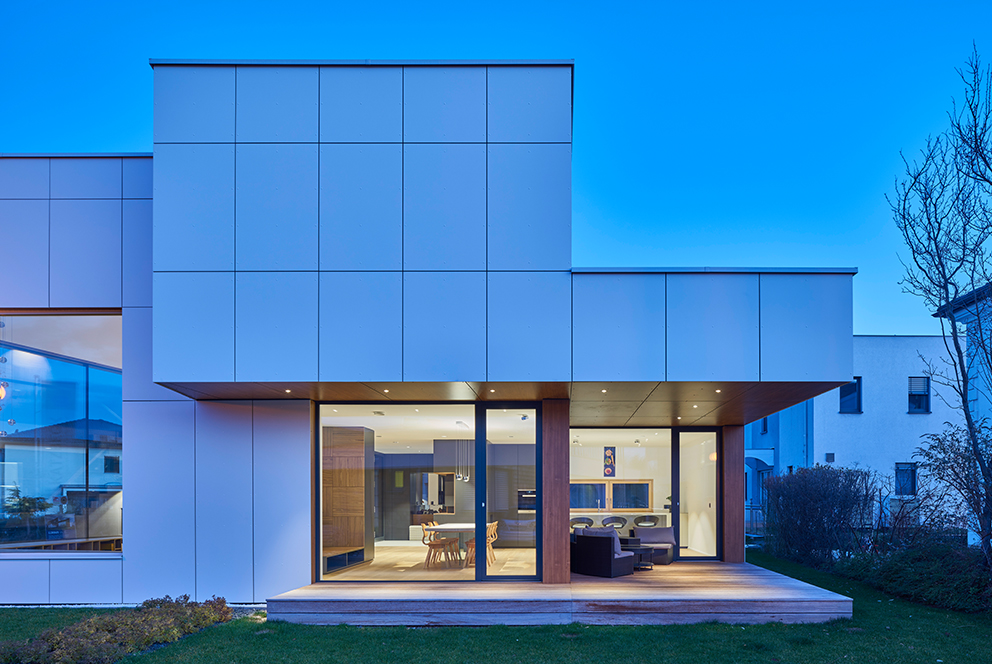 Exemplary: The angular volume and the purist design of the façade attract attention to the floor-to-ceiling windows, which offer glimpses into the warm and bright atmosphere inside. All photos © Robert Sprach, Munich 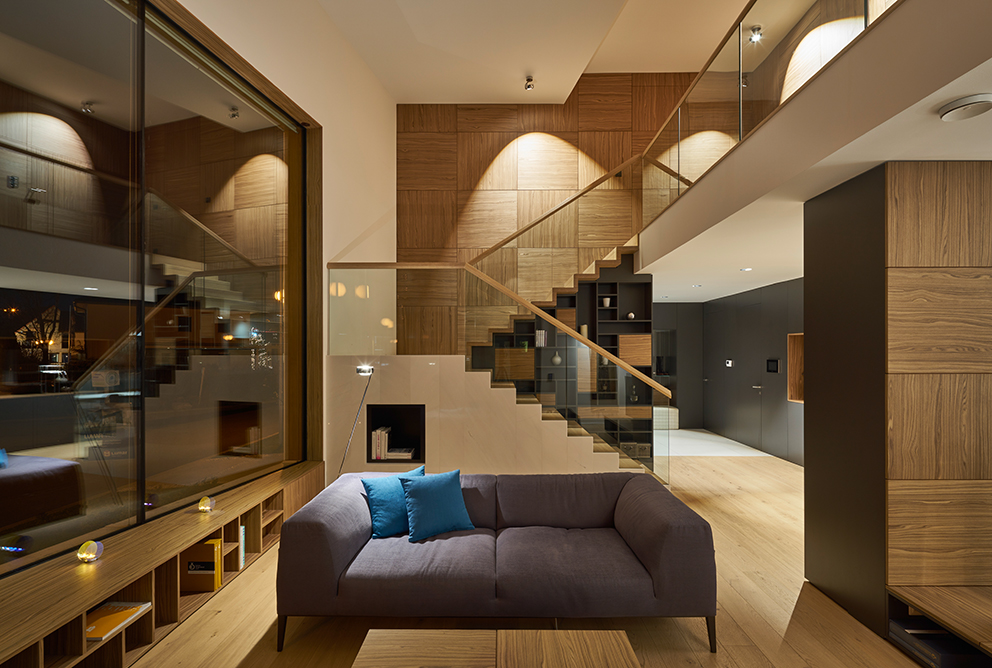 By night the elegant ceiling lights by Occhio cleverly present the generous spaces in the proper light and bring out the best in high-quality materials like wood and glass. 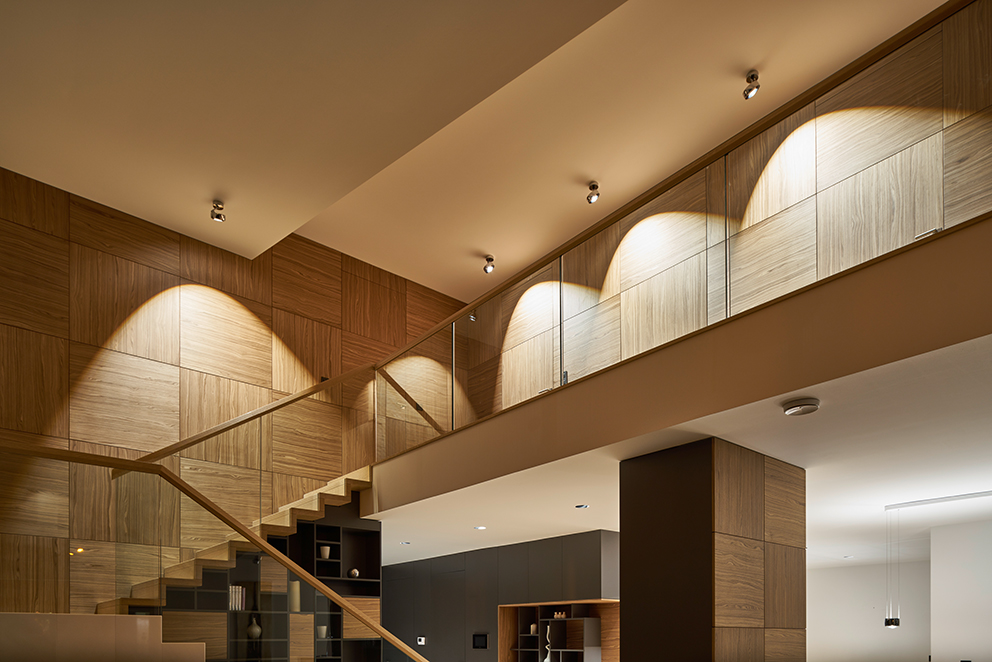 Artful cones of light: Surface-mounted “Più alto 3d” ceiling lights provide warm, atmospheric light of up to 2,200 lumen on the staircase and in the gallery. With the special “Occhio 3d Kinematik”, the head of the luminaire is particularly mobile, and the color of the light can be adjusted too. 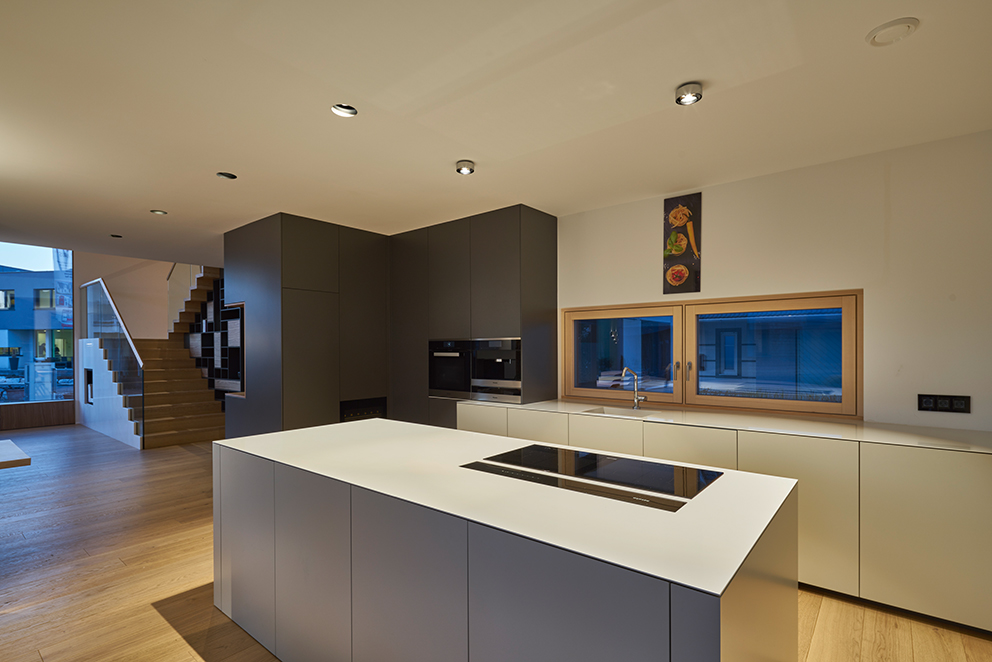 The design team consisting of Axel Meise and Christoph Kügler created an elegant, purist design for the round heads of the luminaires, which measure 123 millimeters in diameter. With up to 2,200 lumen, the surface-mounted LED spotlights illuminate the kitchen work surfaces precisely. 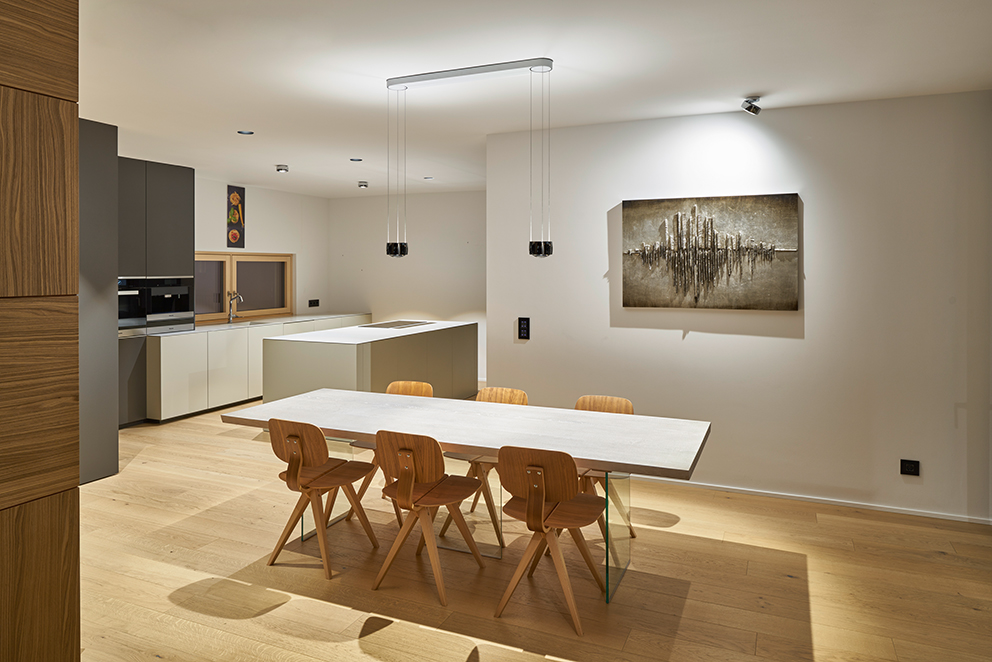 Decorative and smart: The “Sento sospeso” pendant luminaire that hangs over the dining table can be dimmed as preferred – with touchless gestures that ensure synchronized control of both lamp heads. 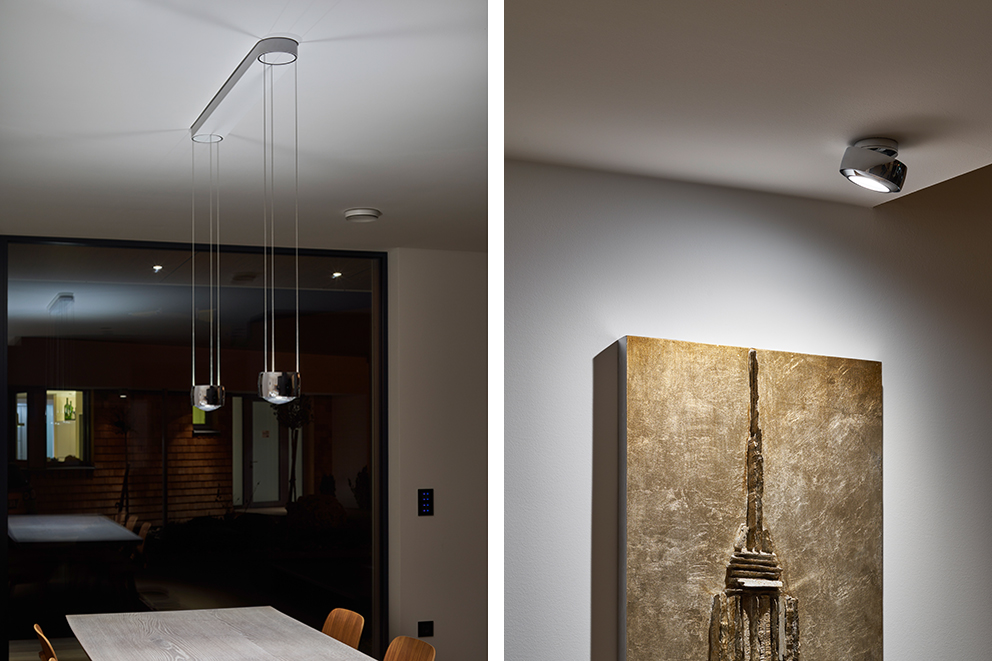 Links: Thanks to flexible height settings, the length of this pendant luminaire can be adjusted precisely. Right: The lamp head of the “Più alto” surface-mounted spotlight can be rotated 360 degrees and can also be angled up to 45 degrees. When targeted correctly, it thus bathes the artwork on the ground floor in a soft, diffuse light. 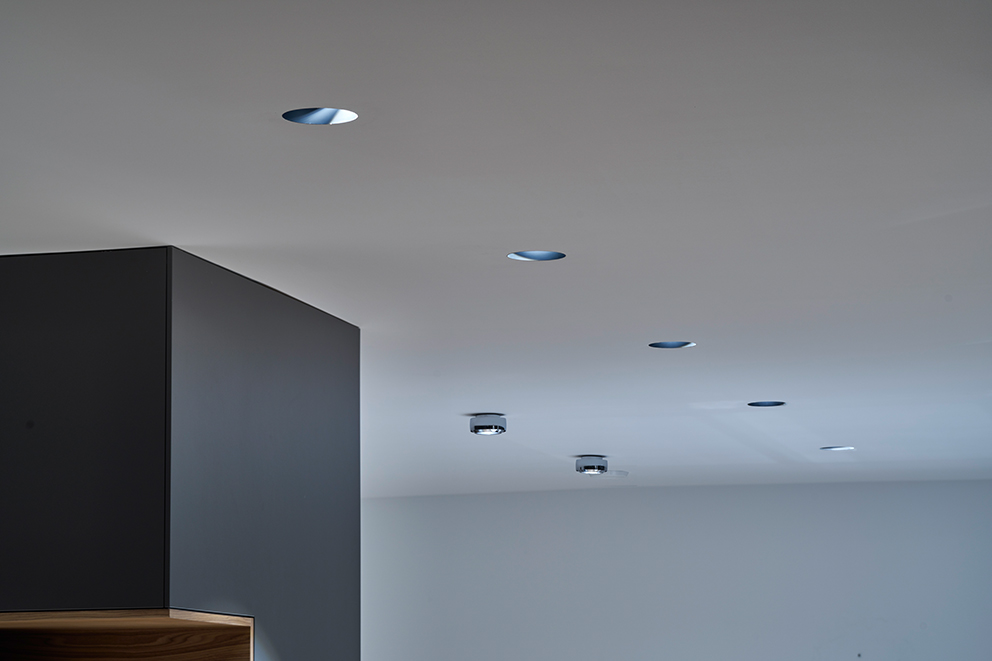 “Più alto” surface-mounted ceiling lights in the “seamless” format provide basic illumination on both levels. Centrally arranged and positioned at regular intervals, they provide good orientation both in the corridors and in the spacious rooms. 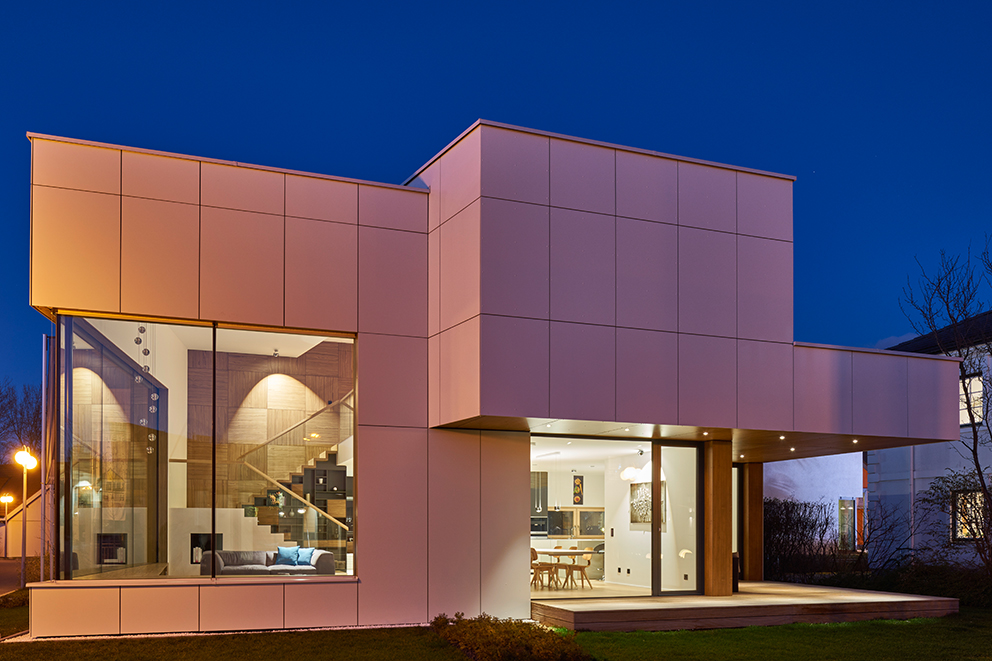 The striking staircase lighting catches the eye even from a distance. Munich-based manufacturer Occhio is the market leader in the area of designer lighting. With its modular and multifunctional lighting and spotlight systems, it offers the right lighting solution for any situation. 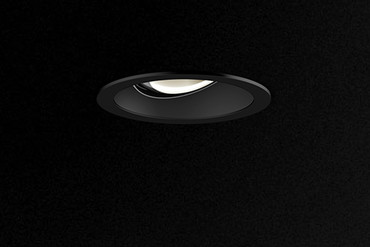 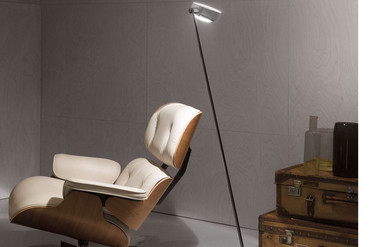