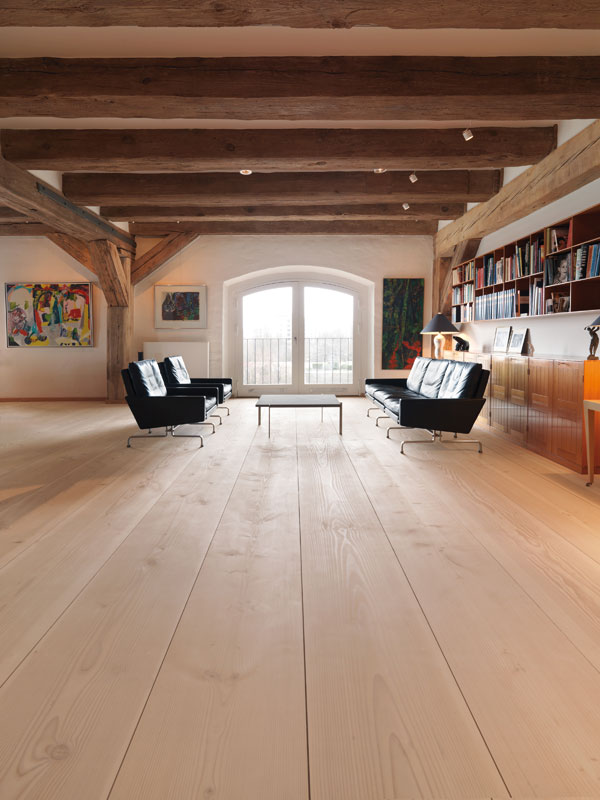 The owner of this apartment in the former storehouse “Blue Warehouse” in Copenhagen chose to lay Douglas flooring by Dinesen, photo © Anders Hviid

Built in 1783 as a storehouse for a trading company, today the listed building in the heart of Copenhagen is a popular residential property with a view of the Danish capital’s harbor and opera house.

Now only its name, “Blue Warehouse”, referencing the former color of its roof and windowsills, recalls this bygone era. It boasts a number of exclusive condominiums, designed individually according to the owners’ tastes. One of them commissioned Danish architect and designer Knud Kapper with the interior design of his apartment.

Inspired by the warm atmosphere of the Pomeranian pine ceiling beams and knowledgeable in the history of the building, Kapper opted for two striking design features, namely wood and blue accents. These are demonstrated, for instance, in the specially designed kitchen made of American walnut and the mahogany dining table, sideboard and desk. References to the past are evident in the blue closets and the headboard of the bed by manufacturer Montana in “opera blue”.

The owner specifically requested that the wide Douglas pine floorboards by Dinesen be laid throughout the apartment. The quality and aesthetic appeal of the flooring had already impressed him in other of his properties. The floorboards are 34 millimeters thick, 400 millimeters wide and up to 15 meters long. They are treated with lye and white soap. The solid wood flooring by Dinesen underlines the warm, authentic and very cozy atmosphere of the apartment.

The owner of this apartment in the former storehouse “Blue Warehouse” in Copenhagen chose to lay Douglas flooring by Dinesen, photo © Anders Hviid 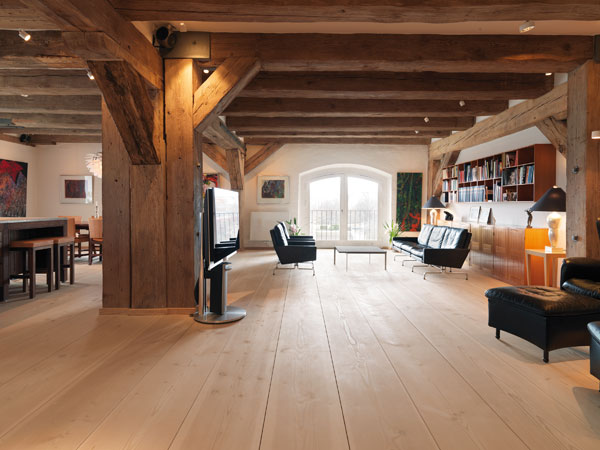 The view from the window of Copenhagen’s harbor and opera house, photo © Anders Hviid 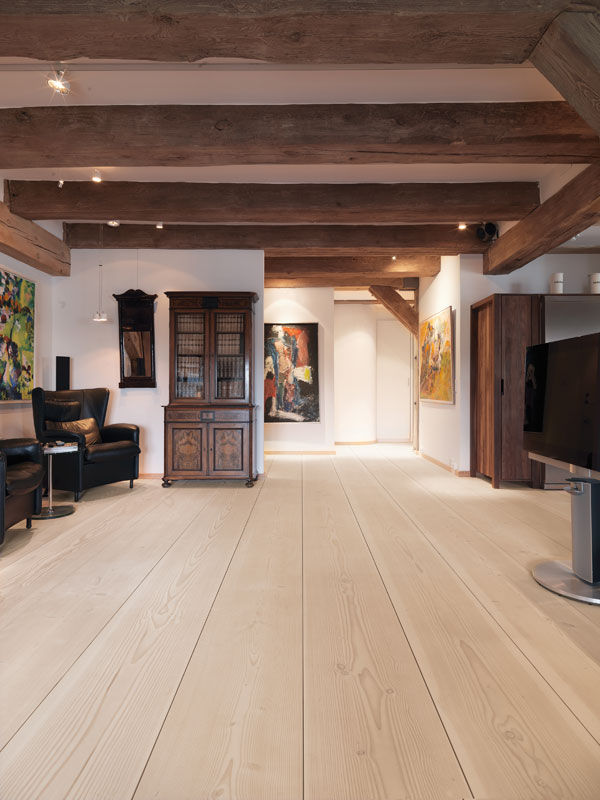 The solid wood flooring by Dinesen creates a warm atmosphere in harmony with the ceiling beams of Pomeranian pine, photo © Anders Hviid 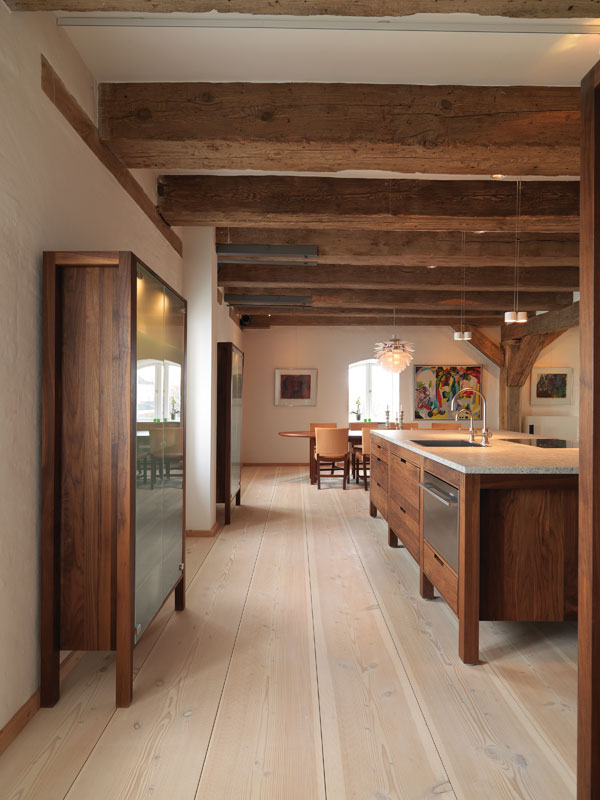 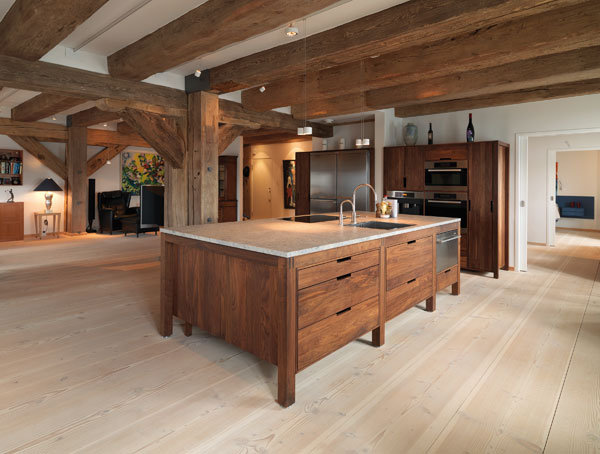 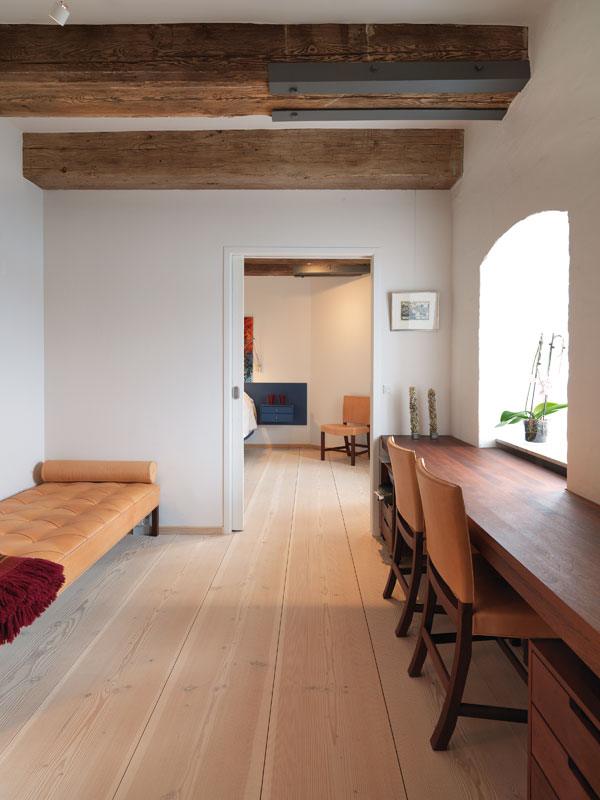 The impressive ceiling beams are even visible in the hallway, photo © Anders Hviid 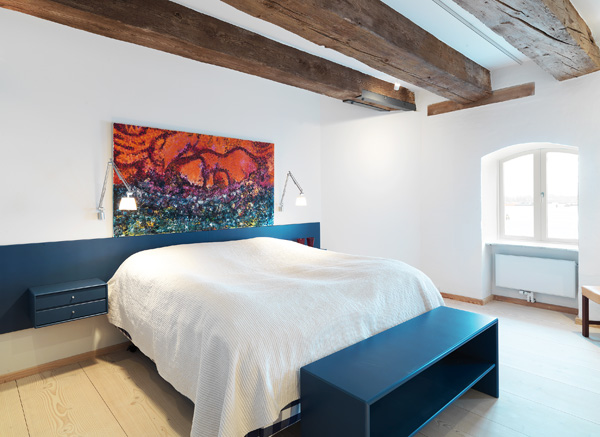 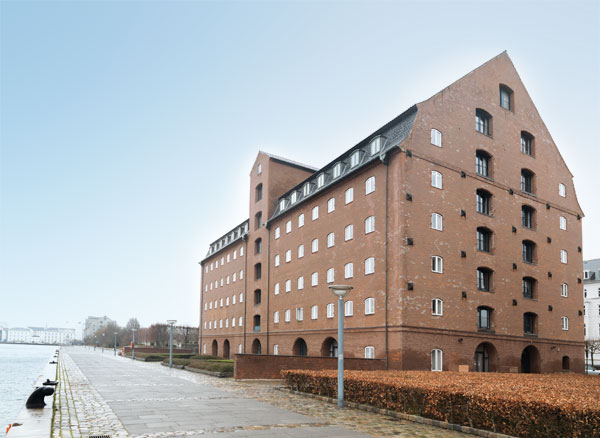 The “Blue Warehouse” is a former storehouse, photo © Anders Hviid 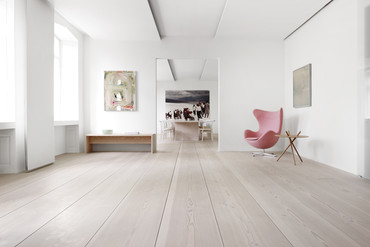