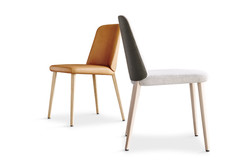 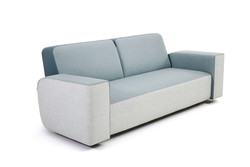 Arian Brekveld Brekveld (Apeldoorn 1968) graduated from the Eindhoven Design Academy in 1995. After working for two years at Ontwerpwerk in The Hague, he has been an independent designer since 1998, working from his studio in Rotterdam. Arian Brekveld shows that he has maintained the ability to grow in his development and in his craft. His objects can without exception be called stylish, without resorting to lavish design. The clear, crisp lines create an almost sober design with a timeless value, which is in part defined by the thorough research and a tasteful and intelligent use of color and material. Brekveld doesn’t stick to a fixed design process, but allows spontaneity to inspire his work: “Every product requires a different approach. Finding the right path is a design process in itself”. Brekveld allows himself the flexibility to switch between the various phases that are best at any given stage of the design process: “One moment, I am working on scale models, the next, I’m working with computer animations. The trick is to know when to switch to the next phase, and if necessary switch back again. It keeps the design process moving”. Next, he always makes his models on a life size scale, approaching the colors and materials as closely as possible and preferably in the space where the final design will end up. He keeps observing and adjusting until he is happy with the outcome. In addition, Brekveld has the capacity to start a conversation and a process with clients and manufacturers. He is always genuinely interested in the people he talks to. His extraordinary empathic ability allows him to explore the circumstances and possibilities of a company, client or manufacturer. He learns to speak their language and approaches his target in a friendly yet decided manner, convincing other people to explore the boundaries of the production process together. This characterizes Brekveld’s specialty: a combination of an idea and an innovative, professional execution that leads to the very attractive, seemingly simple and always very functional products, that often, on reflection, turn out to have a second layer, an added value. It is this capital strength that distinguishes Brekveld as a designer, allowing him to take on the role that fits him like a glove and make a more than positive difference in the design area. Brekveld works for clients like Royalvkb, Montis, Imperfect design and Hella Jongerius. Jongerius occupies a special place, which is why Brekveld regularly works on projects of JongeriusLab, as an important external specialist, designing and developing products, varying from small handcrafted objects to complex industrial designs, like the airplane seats for KLM. Over the years, Jongerius and Brekveld have developed an understanding that allows them to connect on an almost intuitive level.