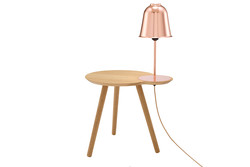 Following a degree in Applied Arts at the University of Toulouse Jean Jaurès, that he gets in 2011, he joined a Master's degree in Design & Lifestyle at the IUP Applied Arts in Montauban, offering a color formation unique in France.

He made numerous internships like for exemple in the publishing house Reine Mère Edition and in the Samuel Accoceberry Studio more recently.

During the last year of the Master's degree, he created the hybrid furniture Majordome, in collaboration with Pauline Pinto and Cedric Guillemin. It is rewarded with the Audience Award at the 2014 contest Cinna and will be released in spring 2015.

Benjamin prefers a modern design, simple, without frills. He like to emphazise the materials and work with the savoir-faire of craftmen. The objects are for him a source of emotional bonds with people, a subject that he developed during his graduation memory.

He graduated in 2014 and moved to Paris where he works now as an independent designer.