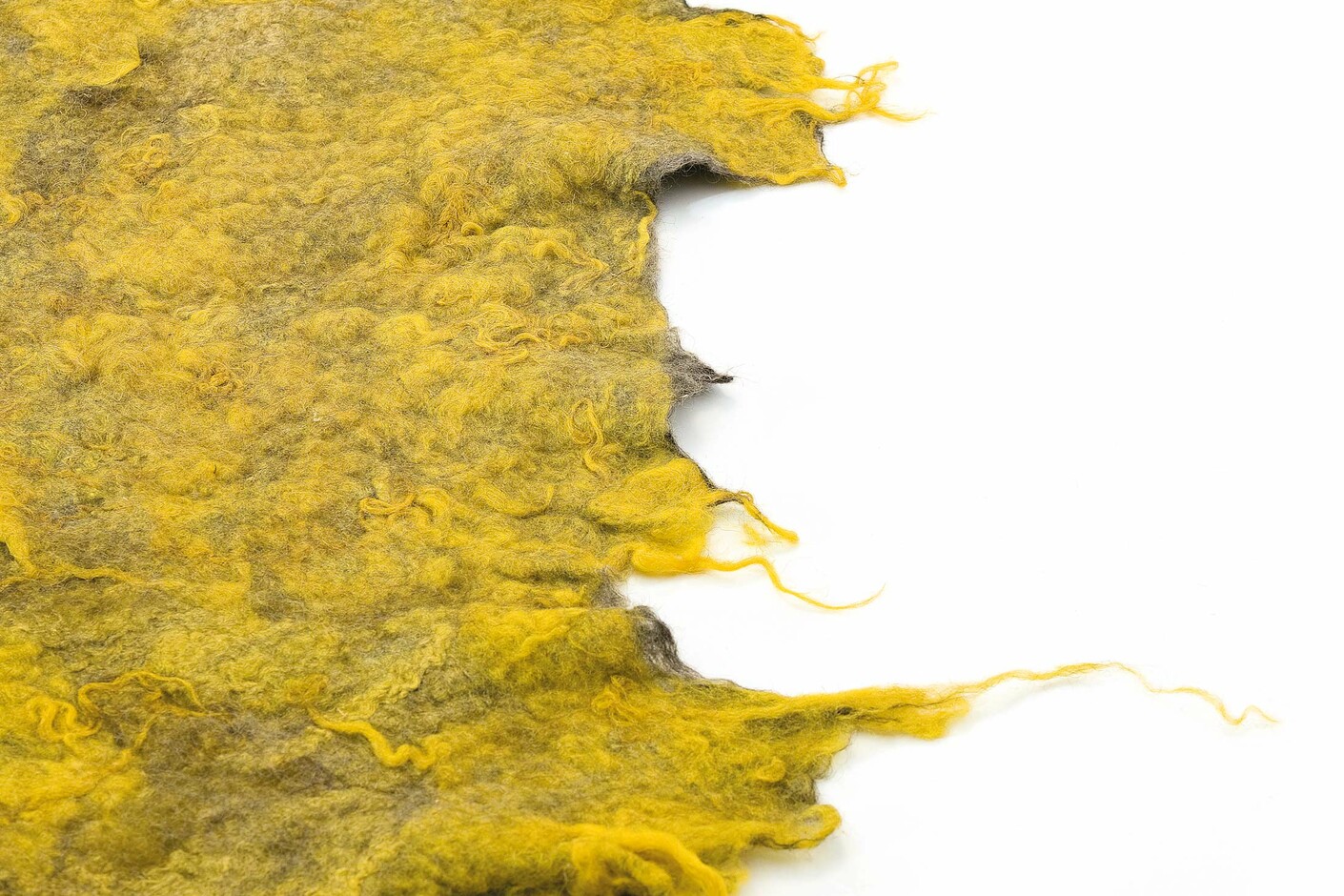 Born in the Netherlands in 1963, Claudy Jongstra was trained as a fashion designer. She first came under the spell of felt in 1994 when she saw a Mongolian yurt on display in Nederlands Textielmuseum. The tent had a pattern of laid-in colors. She recognized the technique from pictures, but was overwhelmed by the material itself and the colors. Jongstra quickly mastered the process of felting and started to make fabrics in which wool was felted with silk fibers or was combined with transparent silk organza. In the mid-nineties this was unheard of, but the process yielded a remarkable combination of transparency and density, of elegance and rawness, of craft and art. Her tireless experimentation with felting techniques is motivated in part by her fascination for the traditional felt production as well as the durable and technical possibilities of wool. The result is an extraordinary range of textiles that are as rugged as they are refined. She works in an autonomous and sustainable manner while controlling the entire process from raw materials to end product including the use of natural dyes. Jongstra controls the entire process, from raw materials to end product, so that she can operate independently and work in a sustainable manner. Jongstra tends her own flock of rare Drenthe Heath sheep, contributing to the survival of this age-old breed in the Netherlands and to the preservation of the natural landscape. Establishing her own dyeworks has made it possible for her to color her own products with natural dyestuffs rather than synthetic ones starting with madder, St. John's Wort, and African marigold. Since 2009 Jongstra also keeps her own hortus botanicus where national historic varieties of dye-plants grow. This garden operates as laboratory for the dyes, but at the same time it is a source of inspiration. By breeding plants that have often become obsolete, she contributes to preservation of heritage in this way too. This year she will start with the growth of innovative plants in large fields in Friesland. The first plants of this experiment will be madder, woad and larkspur. Since the mid-nineties, Jongstra's textiles have been used in collections by leading fashion designers such as John Galliano, Donna Karen, and Christian Lacroix. In the late 1990s, the Jedi warriors in Star Wars Episode 1: The Phantom Menace wore coats of Jongstra's felt. At present, her most important projects involve the embellishment of the interiors of buildings with wall coverings and rugs. She has designed wall hangings and installations for the Dutch government building, the Catshuis, the Dutch Embassy in Berlin, and the entrance to the Public Library in Amsterdam. She closely cooperates in this work with architects such as Jo Coenen, Claus en Kaan, and Rem Koolhaas. She recently was awarded the prestigious Dutch prize for applied arts and architecture: The Prins Bernhard Cultuurfondsprijs.