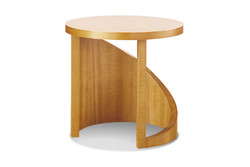 Gerard Taylor graduated in design from Glasgow School of Art and received his
master's degree from the Royal College of Art in London in the 1980's
along with the generation of designers that included Ross Lovegrove, Jonathan Ive
and Jasper Morri

son. Upon graduation, Ettore Sottsass invited Taylor to join his
design office in Milan to work on projects ranging from furniture for Knoll to
worldwide retail stores for Esprit as well as to collaborate on the second and
subsequent collections

for Memphis, one of the most innovative and influential
movements in international design.

After five years with Sottsass, he returned to London to establish his own
design studio which afforded him the opportunity to work with individual client

s
and international leaders in the fields of environmental, product and furniture
design.

The practice maintains long term relationships with many of its clients, who
first came to the studio in the early 1990's. Projects have ranged from<

br>office systems for the European group Skandinavisk, task and soft seating for
Giroflex, to new retail concepts for Habitat in Germany and Selfridges in the
UK as well as private residences in London and France.

ned for Bernhardt Design was Wave, which
was introduced at NEOCON 99. His work has been published and exhibited
extensively and is held in both private and public collections worldwide.