Ten years ago GS graduated from the Henri Van De Velde-instituut in Antwerp. Together with painterByarkd, he managed to become in a short period of time one of the most trendy architects in Belgium. His work is characterized by consistent forms, sober

lines and ardent/glowing colours. The composition/interior of the Culture Club, a world-known discotheque in the harbour district of Gent,remains the most important calling card. Furthermore is the shop Verso also a eulogy. Many magazines praise his work

and describe his style as contemporary chic; A whole of purified lines,warm colours and …attention for glamorous details. In February 2006, Wallpaper magazine pickedthe private bar Molotov in Antwerp as Best New Club of 2005. In 2004 he became lau

. On this moment … of new housing project and a complete furniture collection isbeing finalised. Parallel GS. will also dedicate himself with the setting up of a hotel and restaurantin own administration. 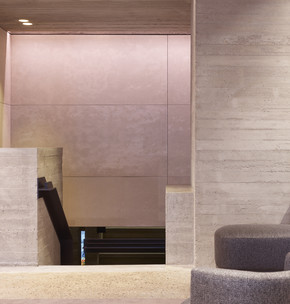