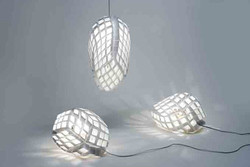 Heath Nash studied sculpture at the University of Cape Town, but began making lampshades and other life style products after graduating. Exploring the question what South Africa could look like or what design language could express a contemporary aesth

etic of his country, he experiments with ‘craft techniques’ as a high end design tool. Named as the 2006 Elle Decoration South Africa Designer of the Year for his treasures from trash, Heath has also just been appointed the SA creative entrepr

eneur of the year - a British council initiative. Before he will be visiting London for the 100% Design show in late September PingMag wanted to know how he actually manages to recycle empty bottles to perfectly crisp precious objects, what difficulties h

e occurs when creating handmade products and where his small business is heading.Heath, creating lifestyle objects from other people’s rubbish doesn’t sound too sexy at first, but when looking at your objects all possible doubts are imm

ediately blown away. "People are generally quite shocked that those things are made from rubbish, which I find really pleasing. (laughs) That shows that I’m obviously doing it right and that’s exactly the point I am trying to make!

It is possible to re-use this kind of plastic straight away and take it to a sophisticated level."