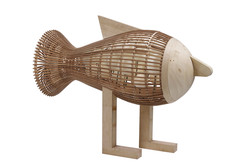 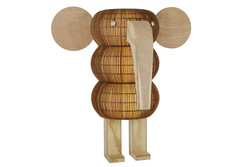 Born in Madrid in 1963, Isidro Ferrer studied drama and specialized in mime and pantomime. He combined performance and scenography for several years. In 1988 he starts working as a page maker and illustrator for the newspaper Heraldo de Aragon.
One year later he moves to Barcelona for a one-year stage at the workshop of the graphic designer Peret, who will exert a great and salutary influence on his work as a whole. In 1991 he founds, along with three other professionals, the design studio Camaleon in Zaragoza. In 1996 moves to Huesca where he sets up his own studio, sharing his work up among poster design, editorial design and illustration, artistic direction of exhibitions and some animation series, mainly for advertising purposes. Designs for the newspaper El Pais and for the publishing companies Santillana and Alfaguara, continuity wipes for Canal Plus, the graphic image of Luis Bunuel's centenary, a line of games for BD Ediciones de Diseno and the TV spot of Volkswagen's New Beetle are some of his most recent works.