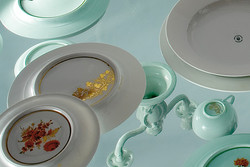 Khashayar Naimanan born 1976 in London started a career in graffiti at the age of 15. Inspired by early graffiti writers, he became one of the few Kings of the 'London Underground' by the mid 1990's. He studied product design from 1996 to 1999 at Central Saint Martins. He then moved to Munich where he worked as an apprentice in a metal-workshop. In 2001 Khashayar wins the Blueprint Competition organized by the Vitra Design Museum during his studies at the Royal College of Art. After graduating in 2003 his tableware collection 'incognito' was produced by Porzellan-Manufaktur Nymphenburg and launched in 2005. He lives in London and Munich and is an associate of Kram/Weisshaar.