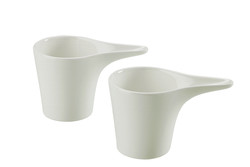 Kim Buck is a trained goldsmith and later took an education as a designer for precious metals from the Institute of Precious Metals in Copenhagen. Since 1990, he has his own studio and gallery in Copenhagen, working next to jewellery with product design for different companies. Many of his products are exhibited or on sale in leading design museums around the world, among others the Museum of Modern Art in New York. Kim Buck was also active between 1999 and 2001 at the University of Gothenburg, Sweden, as associated professor for jewellery design and a visiting professor in 2004 at Konstfack University College of Arts, Crafts & Design in Stockholm at the department of Metal Design. Since then, he has been an active teacher and presenter internationally. Kim Buck has received a number of awards as a result of his work, which always challenges the conventional. Latest, he received the important international Red Dot Design Award 2008 for Stelton's new porcelain service Visby.