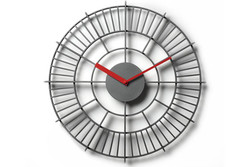 Laurene Leon Boym is a designer and educator.
Born in New York City in 1964, she graduated from SVA in 1985. A chance meeting with Alberto Alessi sent her back to school in 1989, graduating with a Master's in ID from Pratt in 1993.
During and immediately after graduate school she worked with high profile design company Smart Design.

Laurene Leon and Constantin Boym's projects have been published worldwide. A 240-page monograph on Boym Partners Inc, "Curious Boym: Design Works", has been published by Princeton Architectural Press in November 2002.
Their work is a part of the collections of the Museum of Modern Art in New York, The San Fransisco MoMA, Cooper-Hewitt National Design Museum in New York; The Whitney Museum of American Art in New York, American Craft Museum in New York; Museé Des Arts Decoratifs in Montreal; and the Museum of Decorative Arts in Prague.

From 1993 to 2002 Laurene Leon Boym has been teaching at Parsons School of Design, where she was responsible for a Junior Product Design studio. From 2003, she is graduate thesis advisor at School of Visual Arts MFA Design Program.
Laurene Leon Boym was a founder of Association of Women Industrial Designers (AWID) in 1992, cocurating Goddess In the Details in 1995 and running the organization between 1995/97.
Constantin and Laurene Leon Boym lecture frequently on design; most recently at: Princeton University
(2002), Philadelphia University; University of the Arts (2002), Art Institute of Chicago (2001), Kendall College of Art and Design, Chicago (2000), Vitra Design Museum Summer Workshop, Boisbuchet, France (1997 and 1999), California College of Arts and Crafts (1999); Domus Academy, Milan (1999), University de Nuevo Leon, Monterrey, Mexico (1995); Cranbrook Academy of the Arts (1997), Altos de Chavon School of Design, Dominican Republic (1992,1995 and 1996).