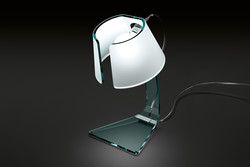 Luca Lo Bianco was born in Turin on October 14, 1971 and graduated in Architecture from the Turin Polytechnic. After several years of collaboration with affirmed and emerging realities in Turin, designing and developing interior architectural projects – b

oth permanent and temporary, in 2005 he started moving progressively closer to the world of Industrial and Product Design where he met designer Francesco Mansueto. Starting in 2009 this professional relationship became more solid and a couple of years lat

er it was consolidated with the creation of the L’Astra lamp and the development of new and interesting projects in the definition stages.