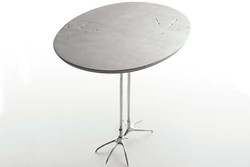 Meret Oppenheim (Berlin 1913-Basel 1985) decided at an early age not to marry at all or at least not until later in life, and began hiding a sketchbook inside her hymnal during long and tedious church services. She would later present this first Cahier

d'une Ecoliere to the Surrealist leader, Andre Breton. She arrived in Paris in May 1932. Soon bored by the academic routine of the academy, she began to spend her days in galleries and cafes, writing her first poems in the Cafe du Dome where she met

the Salon des Surindependents in 1933; after that she attended Surrealist meetings and gatherings, increasingly identifying her life and her art with the movement. Her youth and beauty, her free spirit and uninhibited behaviour, her precarious walks

on the ledges of high buildings, and the "surrealist" food she concocted from marzipan in her studio, all contributed to the creation of an image od the Surrealistic woman as beautiful, independent, and creative. Her full-lined teacup, exhibited at t

he Museum of Modern Art, New York, in 1937 by Alfred H. Barr Jr., was chosen by visitors to the exhibition of fantastic furniture with Leonor Fini, Max Ernst, and others at the Galerie Rene Druin and Leo Castelli in Paris. It was on this occasion that

she presented some of her designs including her notorious table with the bird claw feet.