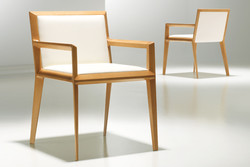 Michael Vanderbyl received a Bachelor of Fine Arts degree in Graphic Design from The California College of Arts and Crafts in 1968. Today he is Dean of the School of Design at his alma mater.

Vanderbyl has gained international prominence in the design field as a practitioner, educator, critic and advocate. He has been a guest speaker at numerous design conferences as well as a visiting instructor at prestigious universities and d

esign schools. In 1997, he was one of I.D. Magazine's "ID Forty" and received the Lifetime Achievement in Product Design by the Pacific Design Center. Contract Design distinguished him as one of the "20 Best Interior Designers, 1975-997rdquo;. In 2000, he

received the highest honor awarded by the American Institute of Graphic Arts — the AIGA Medal. Vanderbyl was featured on the PBS series "The Creative Mind" and his work has been exhibited worldwide including at the Denver Art Museum (USDesign: 1975-2000)

, SFMOMA and Museo Fortuny. Permanent collections of Vanderbyl's work are held at the Cooper Hewitt Museum, the Library of Congress, the San Francisco Museum of Modern Art, the Denver Art Museum and the museum Die Neue Sammlung in Munich.

nd interior organizations across the nation have invited Vanderbyl to address their membership or jury their competitions. He has served as a judge for the James Beard Foundation Restaurant Design Awards, AIA competitions for interiors and architecture, f

ial Jury for the 1992 National Endowment for the Arts Presidential Design Awards for the US Government.

signers (ASID) competitions. His designs of the Chicago showrooms for Teknion won the NeoCon 1997 and 1999 IIDA Showroom Competition's "Grand Award", and his design of the Robert Talbott, Inc. retail store in New York won the 1996 Monsanto DOC Award.

7. Vanderbyl's Archetype collection for McGuire Furniture was awarded thd 2000 Pinnacle Design Achievement Award by the American Society of Furniture Designers. His designs for HBF received three Best of NeoCon Gold Awards in 2000, and in 2001, he receive