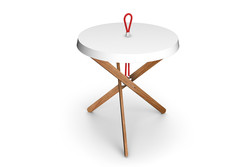 Simon Busse, born in 1976, studied Industrial Design at the Stuttgart State Academy of Art and Design, where he also earned a degree, and at the Eindhoven Design Academy with Richard Hutten and Gijs Bakker. After having worked for Frank Tjepkema, Amsterdam, Xavier Claramunt, Barcelona and Gonzalo Mila, Barcelona, Simon Busse started his own studio in 2006. His works for Almerich, Magazin or Mox were frequently published in print and online magazines including Financial Times, Detail, Stylepark, Icon, Grid or Design Report, won several awards and were exhibited internationally. Besides his activities as an industrial designer, Simon Busse also advises industrial enterprises like Carl Zeiss on design management and teaches at the University of Applied Sciences in Detmold and at Sci-Tech University in Zhejiang.