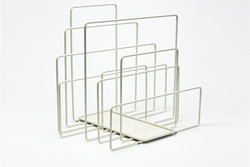 Takahide Sano was born in Tokyo (J) on 06/02/1958. After taking his certificate in Industrial Design (1976), he worked at Toshiba Design Center (1976-1988) specializing in audio-video and TV design both for Japanese and overseas market.In 1988 he came to

Italy and started working as a free-lance designer. In 1988-1989 he worked at Studio Bonetto and since then heco-operates with the artist-designer Marcello Morandini. In 1990 he founded his own design studio, Studio SANO. Beside the activity of industria

l designer, since 1980 he's been cooperating with Art Gallery Unac Tokyo, for which he still designs settings for museum exhibitions in different countries in the world. During the period 1996-2001 he joined the staff of Rai2 - TV Programme "Quelli che il