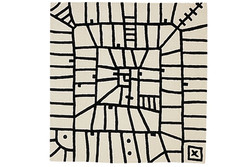 Born in Las Palmas in a Catalan family, he studied graphic design at the Escola Eina in Barcelona (1973-1976) and art (1978-1980). Important influences were the Catalan informalism, the emergent local conceptualism and pop. In 1980 he went to New York, where he lived while he was finishing his studies in the School of Visual Arts with Milton Glaser (1981) and in the New York Academy (1982). During the 80’s, he lived in the New York’s East Village of New York, where he noted the influence of the “pattern painting”, ephemeral movement caught by chance, and the impact on the urban scene of the legendary city, where graffiti and a new generation of artists proposed an early return to painting . From the 90s his work is heading for a colorful abstraction and follows figurative ways during his residence in Los Angeles. His works are in collections in USA, Japan, Germany, France, England and Spain. Nowadays he lives and works in Barcelona.