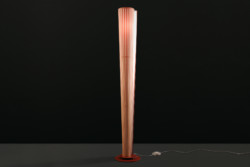 Paolo Imperatori was born in Milan in 1972. From 1994-95 he studied at the FAUP of Oporto in Portugal. He worked as a photographer and later graduated from the University of Technology in Milan (Politecnico di Milano), Faculty of Architecture. From 2002 to 2006 he was assistant to Vico Magistretti.

He was a scientific consultant for the Magistretti's archives and designed the layout of the Magistretti's studio and Museum Foundation in 2009 in Milan. He has also lectured on the work of Vico Magistretti at UIAH of Helsinki, Politecnico of Milan and Domus Academy.

In 2007 he opened his own studio in Milan working as interior and architecture designer. He performed the final design of the Magistretti's house in Lausanne (CH) and designed a Manor in Bibbona, Tuscany, this last project is in progress.

Since 2009 he is collaborating with "Oluce" for the development of new products. Paolo also produced designs for "Campeggi", "Diamantini&Domeniconi", "Frag", "Le Fablier", "Oluce".

He has participated in various exhibition as: "Sensi Divini" (Triennale 2005), "Dolcevita" (Abitare 2006), "Tavole meravigliose" (Cosmit 2008), "Abitare il tempo" (2011), "Meet Design" (Rome 2011), "Design for Charity" (2012), "Contemporaneità del tutto" (Cologne 2012). In 2011 with the collaboration of the architect Marco Romanelli he designed the exhibition "Gioielli per Milano" and "Giornata Xerra - Interfaces" at the Triennale of Milan and has been host of "Festarch" in Perugia.

His more recent work includes a restructuring of a Victorian house in the Centre of London. He is an assistant lecturer at the Laboratories of "Progettazione" and "Allestimento" at the "Politecnico di Milano".