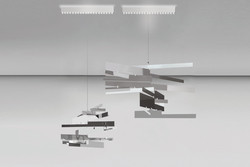 Asif is a young British designer working across the fields of architecture, industrial design and furniture, particularly projects which combine these in new and unexpected ways.
His studio was founded in 2007 on graduating from architecture school. His current clients and collaborators include Magis, Danese, Idée, Sawaya & Moroni, Design Miami and the Clinton-Hunter Development Initiative. In February 2011 Asif was a finalist in the MAXXI / MoMA PS1 Young Architects Program, receiving an Honourable Mention and special jury citation. In July 2010 Asif was featured in The Independent newspaper/Hospital Club list of the 100 most influential creative people in the UK and the list of UK’s 25 top young emerging architecture practices.
He was a Designer in Residence at the Design Museum, London 2009-10. Asif studied architecture at the Bartlett School UCL, in 2004 graduating as the top student. He was then awarded a scholarship to attend the Architectural Association, completing his studies in 2007 and being profiled as one of the 10 best graduating Architects in the UK. His first building ‘West Beach Cafe’ was commissioned in 2007 while he was still a student and became an award-winning project. Asif’s designs, described in Abitare as “wildly inventive”, include architecture, interiors, public space, furniture, lighting, textiles and household goods.
He has exhibited work notably/recently at Idée Tokyo Midtown, Design Museum London, Sawaya & Moroni, Milano Salone ‘Satellite’ (nominated for Design Report Award 2009), 100% Design Tokyo and London Fashion Week and is featured regularly in the national and international press and design journals.
Projects in the developing world are of ongoing interest to Asif. He has designed a bamboo housing system for refugees in Thailand and is currently working with several well-known manufacturers on projects for Africa. Asif lives and works in East London and has two children.