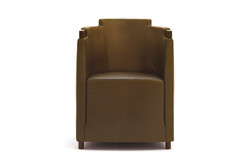 Bruno Moinard, architect/scenographer who’s reputation is well established, asserts himself through the elegance and pureness of his conceptions, elaborated to the last minute detail. He is a man everybody seems to equally appreciate for his professional rigor and for his sympathetic approach.

Following his graduation from the Ecole Nationale Supérieure des Arts Appliqués et des Métiers d’Art and a first experience with Hubert Cornier on a project for the famous restaurant Troisgros of Roanne, Bruno Moinard’s talent as a designer led to his integration in 1979 within Adreé Putman’s and Jean-François Bodin’s team in the context of Ecart and Ecart International. An adventure which lasted fifteen years during which he became Andrée Putman’s senior collaborator and permitted him to namely participate in one of the most memorable projects: the mythical Concorde airplane. He relates with emotion: “We managed to conceive an extremely lightweight decorative fitting, in other terms a second skin using high-tech methods which provided a new silhouette of the plane’s interior while preserving the existing structure. One could compare it to plastic surgery”. During this period, he elaborated boutique designs and graphic charts (Thierry Mugler in Paris, Yves Saint Laurent in the USA and Karl Lagerfield in France as well as on a worldwide basis), hotel designs (Morgan’s at New York, Le Lac in Tokyo, Roissy Airport Sheraton and Saint James Club in Paris, Im Wasserturm in Cologne), restaurant designs (Café Français at the New York’s MOMA, Opium in Tokyo, Orchid in Kobé) office interiors (Editions du Regard, Culture Minister Jack Lang, Arche de la Défense, La 7 Arte, Air France etc.) design for museums, foundations, exhibitions and many private homes - apartments and townhouses (Karl Lagerfeld, Jean-Paul Goude, Pierre Boulez…) In collaboration with Philippe Stark, he even participated in the decoration of President François Mitterand’s Elysée apartment.