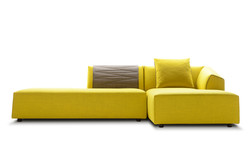 Carolina Galan, was born in Colombia. She graduated in Architecture in 1994 at UPB in Medellin. After experiencing a job as an architect at Arquitectura Interior Studio in Medellin, she attended a Master in Interior Design at Salamanca University in Spain. Back to Colombia she was asked to join the Architecture School of UPB as assistant professor. She created and directed the Master in Interior Design. At the same time she had been working as partner of an important Architecture studio, collaborating on projects of interior design. In 2001, she decided to continue her experience in a creative discipline, trying to exploit her passion for fashion and established the sportwear company SKIMA. From 2002 to 2003 she was Marketing Director of ESPRIT Colombia and South America franchising. In Milan, in 2004-5 she attended the Marangoni Institute and Burgo Institute. Atteding a stage at Vivienne Westwood she improved her sensibility for materials, textures and draping. She brought these values in her own women prêt-à-porter fashion company established in Milan in 2008. In 2014 she came back to interior designing, working on research and development for the creation, with the industrial designer Lina Obregon, of the THEA sofà for MDF, to be presented at the 2015 Salone del Mobile in Milan.