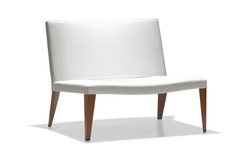 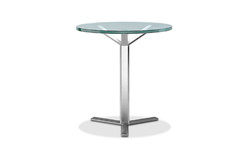 French-born Christian Biecher is an accomplished international architect and designer. He obtained his Master's Degree in Architecture from the L'Ecole d'Architecture de Paris - Belleville, studying with one of his mentors, the influential Henri Ciriani. He graduated in 1988 and started his whirlwind international career, taking him from Europe to Asia, the US, and back again. Biecher, as a graduate student, began his career with famed Bernard Tschumi, gaining a wealth of both practical and aesthetic knowledge from Tschumi. While working closely with Tschumi in his Paris and New York offices, Biecher also taught graduate seminars at the prestigious Columbia University School of Architecture in New York. Working between New York and Paris provided Biecher with a depth of experience seldom offered a young architect at this stage in his career. It was this experience that enabled him to open his own agency in Paris in 1992. Biecher has worked extensively throughout Europe and Asia. His design of the Parisian restaurant Korova, the hip Rue Saint-Honore Joseph store, Issey Miyake's Tokyo headquarters, and his new Pantone® backpack are just a few of his designs that have amassed critical acclaim. Biecher's breadth of work and influence, in both design and architecture, are remarkable. He has been awarded influential projects such as the thoroughly modern Aude County Library, the extension of the Henin-Beaumont Hospital in Pas-de-Calais, the new restaurant for the renowned Louvre, and the interiors of numerous shops and buildings throughout the world. In addition, an exhibit of his work was showcased at the Museum of Decorative Arts in Paris, celebrating his receiving the French equivalent of "designer of the year" in 2002. From building and construction to architecture and interiors—and now furniture, Biecher's sense of technology and innovation, coupled with a sophisticated sense of material and application, makes him a leader in the industry. His use of both form and space makes his designs unique and distinctive, bridging a gap between contemporary architecture and industrial design. Bernhardt Design introduced Biecher to the US market with Abra, a collection of lounge seating and tables. Aptly named, Abra was Biecher's first American design project and received the Best of NeoCon Silver Award in 2002. Biecher and Bernhardt Design were also awarded best new designer at the ICFF (International Contemporary Furniture Fair) in New York City in May of 2002.