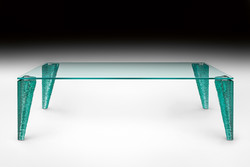 Danny Lane (b.1955) has worked in London since the 1980s. His sculpture and furniture ranges in scale from the domestic, to his massive Borealis, one of the world’s largest glass sculptures (2005, GM Renaissance Center, Detroit, USA). Lane trained as a painter and drawing is fundamental to his art. He explores line in two and three dimensions, driven by a need to challenge the limits of the possible in glass, steel, wood and light. Like glass itself, Lane’s work is sometimes modernist in its simplicity, and, in a different mood, baroque in its pleasure in ornament. Lane came to Britain in 1975 to study with Patrick Reyntiens, who, with John Piper, was responsible for the post-war renaissance in British stained glass. Danny then went on to study painting at the Byam Shaw and the Central School of Art. At Central, he was taught by the visionary painter, poet and philosopher, Cecil Collins. Collins, who like David Jones and William Blake, was part of an English mystical and romantic tradition, remains an important inspiration. Lane’s work combines a monumental, and at times brutal, physicality; stacked and fractured glass, twisted or rusted steel, with his strong belief in the metaphysical and transcendental qualities of art. Lane’s sculptures seek not, to represent the individual ego, rather, following Collins, he aims at a spiritual dimension through an immersion in the material. For this reason, working in the studio with his team of skilled technicians, is fundamental to Lane’s practice. His London studio is equipped to create works of considerable scale, in glass, and in steel. Glass furnaces will now enable Lane to create works of fluidity and brilliant colour. Danny Lane was, with Ron Arad and Tom Dixon, an architect of the avant-garde furniture movement of the 1980s. His sculptural glass furniture such as the dramatic Etruscan Chair (1986) and Stacking Chair, introduced the thrill of broken glass to the slick design world of the 80's. The tension in those early works still informs both his public sculptures and his continually innovative furniture. Lane’s sculptures exploit the strength of glass under compression and combine feats of design and engineering to produce work, breathtaking in its apparent simplicity. He uses the refractive and reflective qualities of his media to challenge expectations, engaging the viewer in a physical and metaphysical dialogue. On a large or small scale, Lane’s works redefine architectural space. Such site specific works as Opening Line (2004, Gateshead, UK) and Assembly Field (2006, National Assembly for Wales, Cardiff, UK) are inspired by and re-draw their surroundings though the manipulation of space and light. Danny Lane’s work is in museums, private and corporate collections world-wide.