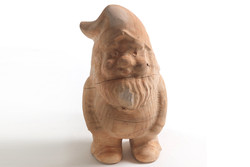 Elio Fiorucci (Milan , June 10th,1935 – Milan July 20th,2015) was an Italian businessman , active in the fashion industry. Even at 17, she began to follow his father's business , a small shop in the center of Milan slippers . In 1967 he opened his first store in Milan's Galleria Passarella : a window on the world with the news of Carnaby Street, the hit parade in London and the U.S.. In 1970, the Fiorucci name becomes a brand with its own industrial production, distributed in Europe , South America and Japan and the Milan store becomes a meeting point for young people who rebel against the conventions . He was born the " Fiorucci Style " and the concept of lifestyle Fiorucci is famous in all the world. In 2004, the Chamber of Commerce of Milan Elio Fiorucci assigns the premium talent scout , entrepreneur and communicator . In 2006, the Mayor of Milan Letizia Moratti gives Elio Fiorucci Ambrogino D'Oro for being the protagonist of Italian fashion , " Elio Fiorucci has revolutionized the style of young people picking and mixing the new trends of the guys from around the world." In 2007 was inaugurated the exhibition at the Triennale ' seventies , the decade long short century " , and is a space dedicated to Elio Fiorucci, " Fiorucciland " as a symbol of the revolution of the 70s Costume.