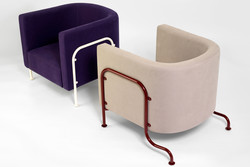 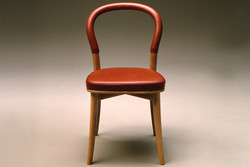 Erik Gunnar Asplund, a distinguished Scandinavian exponent of Functionalism, is regarded as the most important Swedish architect of the 20th century. From 1905 to 1909 he studied painting at the Royal Art Institute in Stockholm. Erik Gunnar Asplund was, however, always interested in architecture and also attended the Stockholm Free Architecture School. Soon after finishing his studies, Erik Gunnar Asplund opened an architecture practice of his own in Stockholm. Between 1911 and 1930 Asplund designed several buildings in a style influeneced by Neo-Classicism, including the Scandia Cinema (1922-1923) and the Stockholm City Library (1924-1928). The furniture Erik Gunnar Asplund designed at that time was also in the Neo-Classical style, as exemplifed by "Senna" (1915), a chair he created for a public library. In 1915 Erik Gunnar Asplund and Sigurd Lewerentz were the joint winners of a competition to design an enlargement of the Stockholm crematorium and the cemetary grounds. The plan Asplund and Lewerentz submitted, attracted a great deal of attention. It integrated the cemetery grounds harmoniously in a wooded landscape incorporating hills, level ground, and glades; in the burial ground planted with trees, the graves become part of nature. This cemetery, which also included several chapels and mortuary buildings, was laid out between 1915 and 1940; in 1994 it was declared a UNESCO World Cultural Heritage site. In 1930 Erik Gunnar Asplund radically changed his style. That year he was appointed head architect of the important Stockholm Exhibition mounted by the Swedish Applied Arts League. From then on Erik Gunnar Asplund switched to a functional style inspired by the Bauhaus. With the "Paradiset" restaurant Erik Gunnar Asplund designed in iron and glass for the Stockholm Exhibition, he introduced the International Modern style to Sweden. His change in style also affected his furniture designs; from now on he designed chairs and armchairs with tubular steel frames, such as the "Karmstol" chair (1931, manufactured by Nordiska Kompaniet). There was "no longer any need for old cultural forms," Erik Gunnar Asplund wrote in 1931 as as the co-author of a Modernist manifesto. Between 1931 and 1940, Erik Gunnar Asplund taught architecture at the Royal Art Institute in Stockholm. Erik Gunnar Asplund was a close friend of Alvar Aalto, who wrote in his obituary to his friend Asplund: "Contact with nature, and this included people, was visibly present in all his projects."