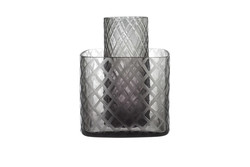 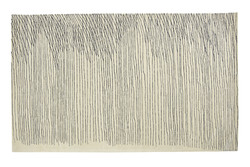 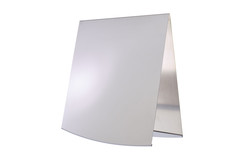 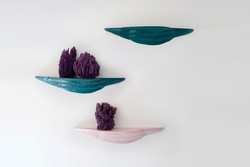 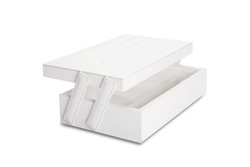 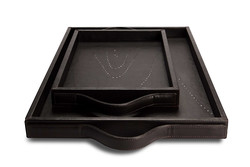 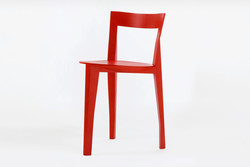 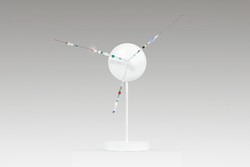 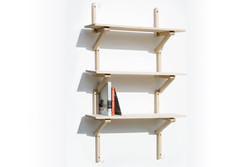 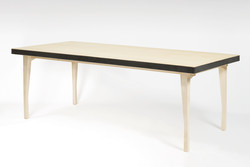 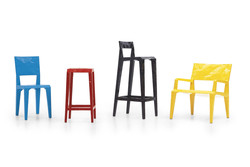 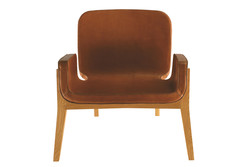 François Azambourg is more an inventor than a designer, as he is able to “weave” furniture. He avails himself of techniques reminiscent of NASA. Reminiscent, too, of poetry. He breaks radically with modern concepts that distinguish between structure and covering, instead hybridizes disciplines, messes around with sophisticated composites but does not neglect the treasures of nature in the process.

After training in electro-technics, he studied art in Caen, then learned his trade at the College of Applied Art in Rue Olivier de Serres, Paris. He has won numerous prizes including one awarded by "Villa Medicis hors les murs" in 2003 and the "Grand Prix du Design de Paris" in 2004.

He spent ten years researching with Selmer and IRCAM, into ways of improving the technology and the ergonomics of the saxophone, using his own equipment components to make prototypes. In the process he learned how to work with a sculptor's tools, familiarized himself with the materials and sowed the seeds of his principle of lightness and economy of materials – the basis of his future work.

For François Azambourg, structure is very important. This interest in materials is exemplified by his Pack chair made of 3-D textiles. In its compact state this chair is no bulkier than a soda canister. So that the chair can take on its ultimate shape, the fibers of the double-walled textile that it is made of harden on contact with an emulsion of two chemical products. Patented in 1999, this invention, which simultaneously represents shape and textured covering, considerably changes the industrialization process for design items and allows for large savings in manufacturing costs. But since industry has not yet really recognized the vast potential of this invention, to date, there are only five prototypes of this minor revolution in existence.

"Guidelines", physically realized as conductors and threads are wound around F. Azambourg’s lamps. "Yvette", in the shape of an illuminated amphora, consists of optical fibers with side illumination. Taking as his starting point a textile texture marketed by Tissavel in Roubaix, Azambourg has designed a lampshade that radiates its own brightness. Full of grace, these objects are completely subject to the principle of economy, similarly to Herlight, a briefcase consisting of a soft one-centimeter layer of leather and foam, designed for luxury accessories manufacturer Hermès. Weighing only 700 grams, this combination of soft elements and self-structuring austerity was awarded the 2006 "Etoile de l’Observateur du Design ". The same principle applies to his Mr Bugatti chairs, manufactured by Cappellini and presented at the 2006 Milan Furniture Fair. This collection of stools and chairs consists of soft steel only a few tenths of a millimeter thick that has had polyethane injected into it. The resultant extreme thinness is reinforced by a "crinkled" look.

F. Azambourg is consistent in his actions, directly applying glossy body paint instead of the more usual primers, thus achieving an effect of depth that reinforces the insubstantial quality of the items. When Lille became European Capital of Culture in 2004 Azambourg designed a micro-restaurant for the event, the size of a large car. This was the result of his interest in scale and social issues. On two 1.6-meter stories – a perfectly acceptable height for people sitting down – the public was received at chairs and tables with shortened legs measuring only a few centimeters. The chef had the necessary tools to prepare hot meals, which he then served to the guests directly from his workplace.

In 2005, Azambourg was given a free hand by the VIA (Valorisation de l’Innovation dans l’Ammeublement) and turned his interests to the principle of the honeycomb. Natural wax as a technical solution and a form of graphic expression, as a casting mold for melting down the fruits made of silver and aluminum. F. Azambourg measures the use of this technology, references the worker bees who are capable of producing honeycomb cells whose walls are barely 100th of a millimeter thick and achieve a degree of complexity that can only matched by stereo-lithography. A form of exploration that reveals the bypaths chosen by the designers, and one that Azambourg rightly referred to as the "constancy of nectar-gathering".