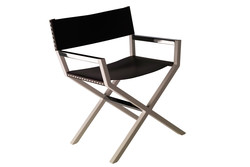 François Russo graduated from the Ecole des Hautes Etudes Commerciales and began his career in Cartier's general marketing management. He was chosen to head Cartier's Institut Supérieur de Marketing de Luxe founded in 1989. He then moved to L'Oréal, before being appointed, at the age of just 25, international director of the Monnaie de Paris. In 1995 he began work with the Havas Advertising group as general manager within the Bernard Julhiet group, where he coordinated consultancy and creative activities for various luxury brands, before definitively moving to artistic management and founding his own image agency. He now devotes his skills to creative management, design, and professional photography. In 2002, the famous designer Andrée Putman, with whom he had already been friends for more than twenty years, asked him to join her in the artistic management and co-running of her agency. Their first work was the 'admiral' boutique of the maison Guerlain in the Champs-Elysées. Projects involving all aspects of design followed: from hotels (The Putman in Hong Kong) to boutiques and corners (Helena Rubinstein and Anne Fontaine in Tokyo, Paris and New York), private homes (philosopher Bernard-Henri Lévy's 'house in the rock' in Tangier), company headquarters (Novartis in Basel), furnishing (Cappellini, Poltrona Frau and Reflex), accessories (the Vertigo collection for Christofle, a bag for Louis Vuitton), and a piano for Pleyel. His friend Jacques Helleu, artistic manager of Chanel’s perfume and watch sector, also looks to him for design activities. Towards the end of 2007, François Russo founded TRACE, which boasts not only private customers, but also the prestigious Italian group Poltrona Frau, the Stade de France, the leather goods manufacturer of the Emperor of Japan, and Anne Fontaine, for whom he acts as image manager. François Russo is a member of the Honor Committee of the Comité National pour l'Education Artistique and the Institut Supérieur du Marketing du Luxe awarded him an honorary degree. He is the author of 'Stratégies de luxe' and co-author with Jack Lang of a monograph devoted to Andrée Putman.