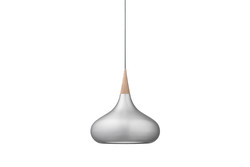 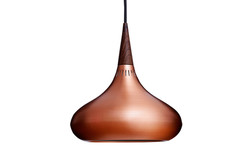 Johannes (Jo) Hammerborg was born on 4 February 1920 in the city of Randers in the Midtjylland region of Denmark, the fourth of seven children. After graduating from school in Randers he trained as a silversmith in Silkeborg and Randers between 1942 and 1

944 before joining Copenhagen’s Kunstakademiet, the Royal Danish Academy of Fine Arts. Exhibitions of Hammerborg’s paintings were held in Randers in 1944, 1945, 1946 and 1947.

In addition to his studies during the war years, Hammerborg became invol

ved with groups that resisted the German occupation of Denmark by sabotaging railways and airfields.

In 1949 he began work as a silversmith at Georg Jensen, where he remained for the next eight years.

In 1957 Hammerborg became head of design

at Fog & Mørup. In this role he was not only a prolific designer, creating over 60 lamps and bringing a new modernist aesthetic to the company, but also collaborated with other designers to adapt their designs to meet F&M’s stringent production requireme

He worked closely with Holmegaard glassworks during the development of both his own glass lamps and those by Holmegaard’s Jacob E Bang, and with Royal Copenhagen during F&M’s collaborations with the porcelain factory. A similar level of engage

ment took place with Sidse Werner & Leif Alring on their Formland project. Jo Hammerborg’s lighting designs won many prizes, amongst them a CICi first prize in 1965 for the Nova and four iF Product Design Awards in 1969 for the Classic, Tunika, Saturn and

In 1980 Hammerborg left F&M to set up his own lighting design business. His departure coincided with the demise of the company as it underwent a series of mergers, first with Lyfa and later with Horn, at which point the F&M brand ceased to