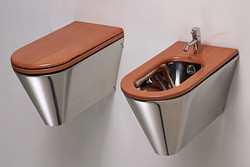 Luigi Ferrario graduates in architecture in 1978 ad the Politecnico of Turin, and in 1982 receives the University of Rome qualifying diploma in the architectural and environmental restauration - at twenty-five years old he runs the architecture section of the Centre d'Experimentation Artistique Marie Louise Jeanneret, Boissano, and at twenty-six years old founds the Laboratorio Architettura Contemporanea (office and gallery of architecture) in Rome with the exhibition "Dopo l'architettura post-moderna". In 1983, still in Rome, he curates the exhibition "Terragni: poesia della razionalità"; in 1984, at Milan, the exhibition "Riccardo Gualino: Architetture da collezione" and again in Rome in 1985, the exhibition "Figini e Pollini: Architetture per il Movimento Moderno". From 1989 he lives and works in Milan. He designs and executes many works of architecture, architectural and environmental restoration, interior architecture and design, published in national and international reviews (Germany, England, Japan, Taiwan, Turkey, Spain etc.) of which are in progress of realization: a building in Milan and in Beirut, a small tower in New York, some "Riad" in Marrakech and an experimental house of the aluminum.