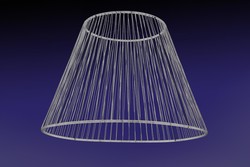 Luis Romero was born in Guadalajara, Mexico in 1979. After completing a one-year course in design at the ITESM University in Guadalajara, Romero decided to continue studying Industrial Desing in Germany. In 2007 he received his Diploma from the Munich

University of Applied Sciences. He assambled the broadest spectrum of work experience possible during his study period. Working at the german automotive concern BMW gave him the chance to familiarise himself with the relationship between modelling and m

Working with famous international designers like Marcel Wanders in Amsterdam allowed him to reflect on the relationship between concept, story and product. He worked later for international companies like Nike and Heineken at Springtim

e Industrial Design and he finally did his degree project in cooperation with the german concern Koziol in Odenwald, Germany.

d manufacture. " A variety of approaches and experiences flow into each of my projects. In my opinion, a good product is always a balancing act between concept, form and function."

His works have been shown in Frankfurt at the Ambiente, the Interna

tional fair for the living and decorating sectors, and he received 2 Awards at the Designcompetition „Innovative vehicles for Kids" in Munich.

Over the past 3 years, Romero was working at HECKHAUS developing furniture, exhibitions and retail stores

for brands like Reebok and Kickz.com. His is passionate by creating objects and spaces that makes people live better. Today Luis Romero works at the Audi - Konzept Design Studio in Munich.