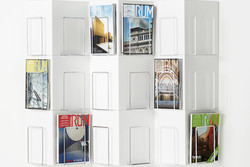 My name is Maria Westerberg and I have studied Interior Architecture and Furniture Design at Konstfack in Stockholm. My Bachelors project was entitled ”T-shirt Chair” and has been featured in almost every Swedish magazine and also in the international press. Today I have my own design/interior studio, based in Stockholm, Sweden, where I creates individual pieces as well as specially commissioned projects, to order. The most recent project is a pattern I made of threatened animals that is close to being extinct. My thought is to makes people aware that it is necissary to act before the animals ends like a pretty picture on their walls. For the moment I am the host for a new TV show for children, made for swedish television with the concept to make new things from childrens old toys. A different project I did 2010 was a house; “Reflections”, made of mirrors cut by hand. It was part of a political exhibition situated on a street in central Stockholm during the Swedish election 2010. In 2009 I made a recycle interior collection for a large Swedish company, Indiska, which generated widespread attention in the national press. Directly after graduation in 2008, I was part of a team at a landscape architect office in Berlin, Topotek 1, where I made conceptual installations in fridges that was exhibited at the Venice Biennal. At the Stockholm Furniture fair 2011, I recieved the first price in the Green Furniture award for my chair “T-shirt chair”.