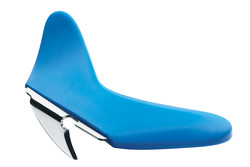 When Marianne Britt arrived in David Bailey's studio in fashionable London, it was to be photographed for fashion magazine Harpers & Queen with the master himself. The magazine had asked Manolo Blahnik to single out a talent he believed in, and he had cho

sen Marianne Britt, who at the time studied shoe design at the Royal College of Art and Design in London. She had caught his attention when she participated in a competition he had arranged at the school that year. Marianne Britt had moved to London afte