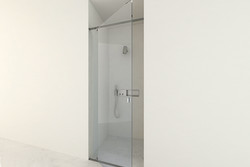 Born in 1955, Tessarollo graduated in Architecture at lstituto Universitario di Architettura of Venice
in 1981.
Since 1983 he has worked in the fields of architecture and urban planning on numerous industrial,
commercial and residential projects

and has also been shortlisted for many architecture awards
and prizes. In 1983 one of his projects was chosen for the National Ideas "Renaissance City"
launched by OIKOS Bologna under the patronage of the Council of Europe and in 1993 he was
pub

lished in Italian Architecture Almanac by Electa on the subject of commercial building. In 1998
one of his projects was awarded "Premio all Committenza" and published in the national press.
In 2000, Tessarollo was invited to participate in an intern

ational competition to design a skyscraper
(MAX) in Frankfurt. In 2004 some of his works were published in "ARCHITECTURAL VISIONS OF
PRESENT-DAY VICENTINA" and exhibited at the Basilica Palladiana in Vicenza. In 2006 he was
shortlisted for the se

lected residential building prize "DEDALO MINOSSE" and again exhibited at
the Basilica Palladiana in Vicenza.
Over the years, his interest in design developed into a real and true passion to which he has
devoted himself with increasing enthusiasm

. Thus were born his innovative projects for design and
technology, such as the table, CHICHIBIO selected in 1999 to represent the Italian at the
exhibition "L'ARTE DESIGN ITALIANO- EMINENT 99", organised by the Italian Embassy in
Prague
Tessa

rollo has collaborated with companies like Boffi, Cesana, Dimensione Disegno, PBA and
Tubes. For Boffi he has designed, together with Tiberio Cerato in 2002, the Cut taps, winner of
numerous awards including the Compasso d'Oro shortlist, the Blue Pr

int Award and the Red Dot
Award. In 2008 Tessarollo has designed the Wings tap range for Boffi.-