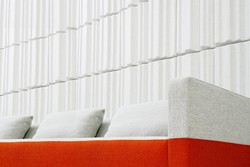 Marre Moerel was born in Breda in the Netherlands. She studied fashion design, sculpture and furniture design at the Royal College of Art in London.

From 1993-2002, Marre Moerel lived in New York, where she worked as a freelance designer and

artist. Since 2003, she is based in Madrid. Moerel works mainly in interior design and product and furniture design. Her way of working is usually described as a crossover between the different disciplines of art, sculpture, installations, photography an

d design. In recent years, Marre Moerel's art and design have been featured extensively in exhibitions and publications worldwide.