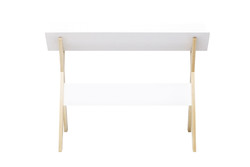 Matthias Zschaler, *1972, is a Berlin based designer. He graduated in Industrial Design from University of Arts (UdK) Berlin in 1999.
During his studies he did several internships as a set painter and sculptor and worked for a Berlin based advertising agency. In 1996 he was one of the founders of award winning design group stolzundkuehn. After several years of work in the toy sector he started running his own studio in 2010. Apart from his activities as an internationally operating product and furniture designer he works as a design journalist and lecturer and recently became lead designer of renowned German watch brand TUW RUHLA.