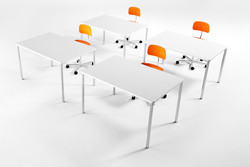 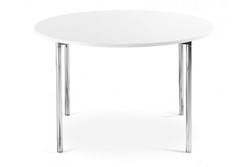 Morten Engelbrecht, born on January 10th, 1961, is the designer behind the APPETIT® Table series. Morten Engelbrecht has since continued his studies of furniture, design and materials. With a business education in hand, Morten Engelbrecht worked many years for furniture companies such as Bo-Tikken and Paustian.
In 1989, Morten Engelbrecht started his own company - Engelbrechts A/S. Initially the company served as an exclusive distributor of many brands e.g.: Wilkhahn, Amat-3, etc. After a successful start, he expanded the business concept to include self-developed furniture. He developed the first product series in collaboration with Vilhelm Lauritzen Architects (VLA). This gave him the courage to covert the firm Engelbrechts A/S from being a Danish furniture retailer to be a focused international furniture manufacturer that sells furniture through an exclusive dealer network. After they received courage to further their own development, Morten Engelbrecht started his next close cooperation with the designer Erik Magnussen.
Morten Engelbrecht has spent many years developing furniture, but primarily as a client and sparring partner for external designers. With the Appetit series, we see the first product where he independently understands his own idea, craftwork and completion of design.