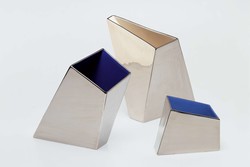 Born in Montreal in 1963 where she earns a Degree
in Architecture in 1985.
Has collaborated successively withe Peter Rose Architect, Melvin Charney Artist Architect and as a
set designer for the Canadian television. Moved to Milan in 198

8 to collaborate with Scottsass Associates.
Opened her own studio in Milan in 1993.
Has designed boutiques, corners and exhibitions for, among others, Alberta Feretti, Luisa Beccaria and Pomellato and curated and designed the first show

of Jean Prouvé in Italy, at the Galleria Carla Sozzani in Milan in 2000. Has designed for Driade, Rosenthal and Ritzenhoff among others and has presented in 2002 "La Ville Nouvelle", a solo show of furniture, rugs and vases at Design Gall

Her architecture projects as well as her design work and her jewelry, have been published in various newspapers as well as architecture, design and fashion magazines such as Domus, Wallpaper, Surface, Deutsch Vogue et Jalouse and a

re included in the collections of the Musée des Arts Décoratifs in Paris, the Chicago Athenaeum, the Montreal Museum of Fine Arts and the Canadian Center for Architecture.