Ole Kortzau is particularly well known for his postcards of Denmark, with colourful beach and landscape scenes which were a big success in the 1970s and 1980s and are still widely popular. But he has produced much more than that over many years. He was bo

rn in 1939, qualified as an architect at The Royal Academy of Fine Arts in 1966 and started the “Grønne Studie” design studio in 1973 along with a small group of architects. Over the next three years, three things became clear to him: the lack of sensuali

ty in the architectural environment did not suit him; he wanted to work freelance; and he had stopped designing houses because he preferred to be involved with what was inside the houses – the things people surround themselves with. He had kept a sketchbo

ok of notes and drawings from a very early age. These numerous sketches later became the basis of his wide-ranging production of porcelain, glass, silverware, textiles, wallpaper for names such as Kvadrat, Georg Jensen, Holmegaard Glass and The Royal Dani

sh Porcelain Manufactory. It suits Ole Kortzau fine to be a lone wolf. Whatever anyone else has created is of no interest to him and he is definitely not the type to be searching left, right and centre for new impulses. The ideas just come without having

any particular shape to them and he never thinks about whether or not something will sell. Desire is what drives his art. Accordingly, creating art and design has to be fun. Ole Kortzau produces textiles because he finds it enjoyable and challenging. In

fact, he had never taken any interest in textiles before coming to Kvadrat, but he has now been associated with Kvadrat for almost 25 years, producing a couple of designs each year up until 1991. Nature, cultural heritage and sensuality are his primary s

ources of inspiration – three overriding elements recurring throughout his production. It’s all about images of blue skies, the lushness of nature, the beach and the sea. It’s all about dreaming and longing for sunshine and warmth. Ole Kortzau is very muc

h aware of all these things. The curtain fabric Waves (1977) is his most successful textile so far for Kvadrat. At the time, co-founder and former director of Kvadrat, Poul Byriel, said the Waves curtain would survive into the next century. He was right!

Not only is Waves still in production, it has come to be the best-selling printed curtain over the years, making it a true classic. Ole Kortzau obtained his inspiration for Waves from observing salt stripes left by the waves on the shoreline. He transfer

red the impression onto tissue paper by tearing it into long strips and shortly afterwards the sample of Waves was ready. As an architect, Ole Kortzau finds it easier to go beyond the various meanings of the words design, art and craft, thus enabling him

to operate more freely within the different areas. The basis for his productions is predominantly functionalist, although in a kindly, soft idiom. A more Scandinavian, human functionalism characterised by simple, practical ease without the strict, heavy

references to geometry and purity of form. 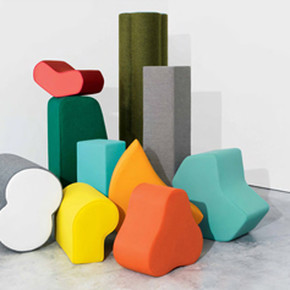 What would Verner Panton’s furniture be like without the bright fabrics from Kvadrat? From the very outset, the Danes collaborated closely with designers to create striking highlights. Now there’s a book describing the company, which is one of the world’s leading makers of home textiles today. A glance behind the scene.
Advertisement